Do-It-Yourself Renaissance Faire on a Dime

For my parents 50th Wedding Anniversary we wanted to do something special.

But we kind of forgot to do something special, and then time passed really fast and suddenly it was just a couple of weeks away and we were like "Oh no! We ran out of time! Let's just give up and take them to dinner!"

Luckily my sister Faralee said that just dinner was unnacceptable. That, by golly, it was their 50th Wedding Anniversary, and we were going to do something special for them or die trying. (Faralee is SO DRAMATIC sometimes.)

So we threw together an impromptu, surprise, Renaissance Faire (with an E), and had it in my backyard. 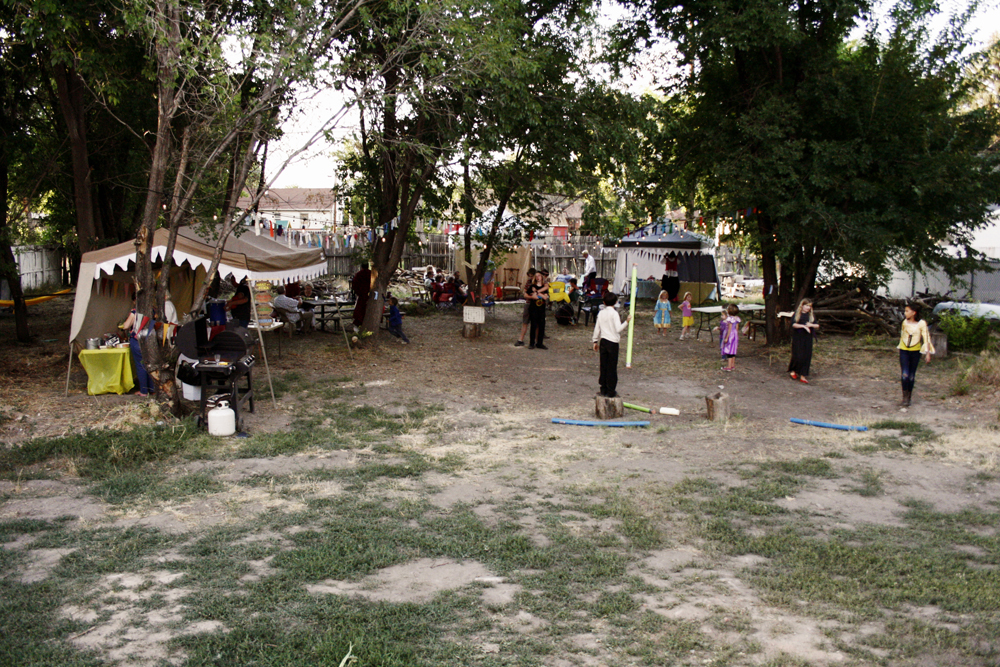 For the first time ever my back "yard" full of dirt and weeds was landscape appropriate!

STEP 1: Collect as many Pop-Up Canopies as you could (I guess for us that was a total of 3. More would have been better, but we needed to spend as little money as possible. So 3 was our magical number.)

STEP 2: Dress up the canopies. Everyone donated all the old fabric and sheets they could spare. (It is times like this that it is handy to have so many siblings.) Faralee cut the sheets into these fancy scallop shapes using pinking shears--I'm sure this shape has a name, but I don't know what it is-- and then embellished them with stamps or simple lines. 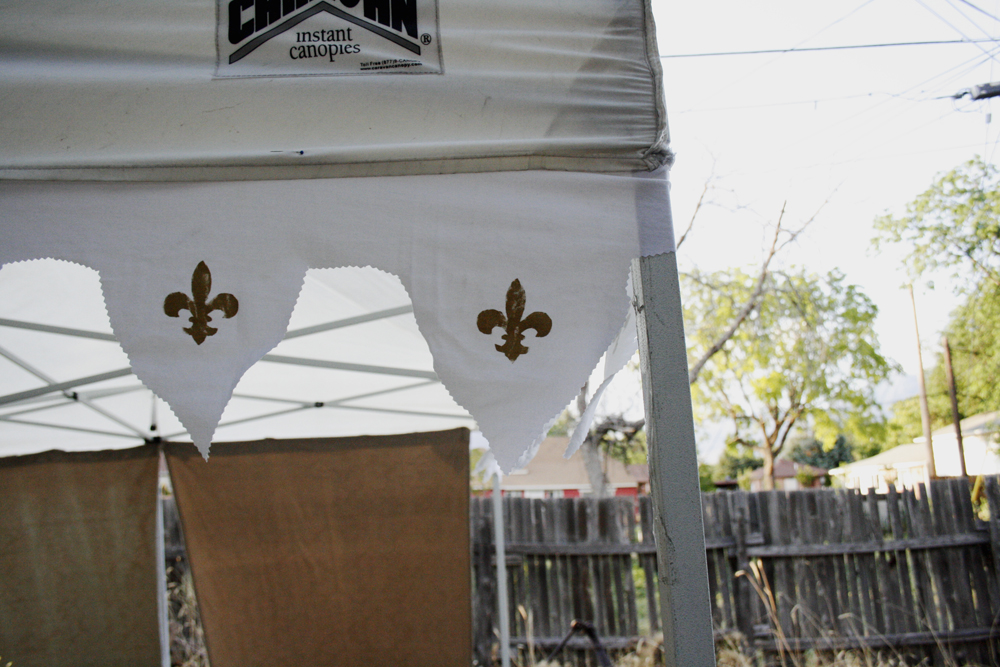 As you can see from the picture we didn't have time for straight lines, and we just pinned the fabric right on to the canopies and you know what? It looked fine. It even looked kind of awesome. So being a perfectionist doesn't always pay off in the long run.

Then we took other fabric and pinned it too the back of the canopies to make them feel a little more like booths.

We had a tent for the King and Queen (my parents) 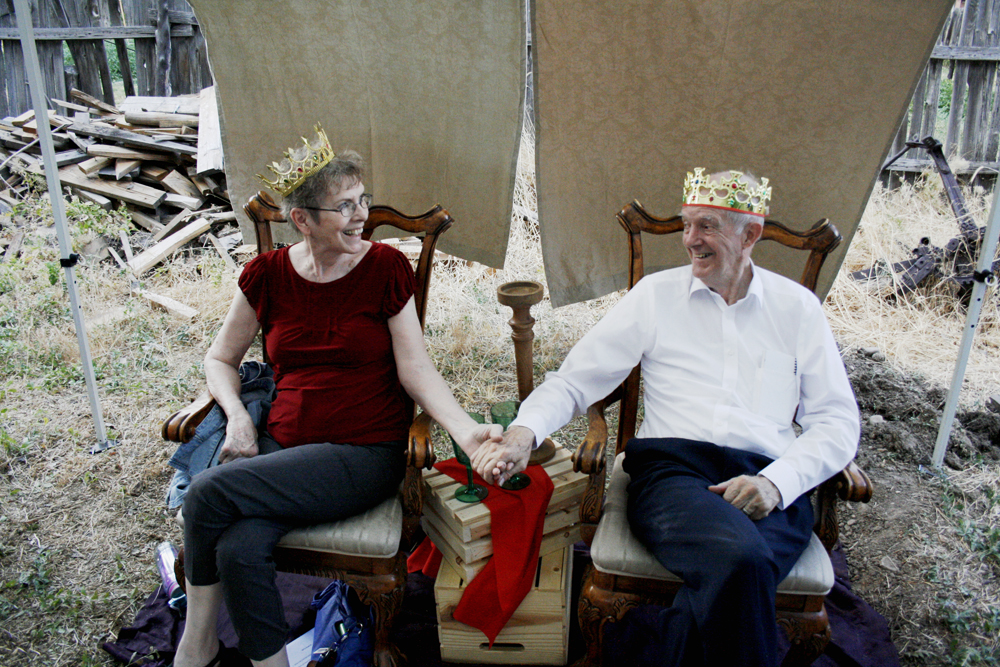 A tent for crafts 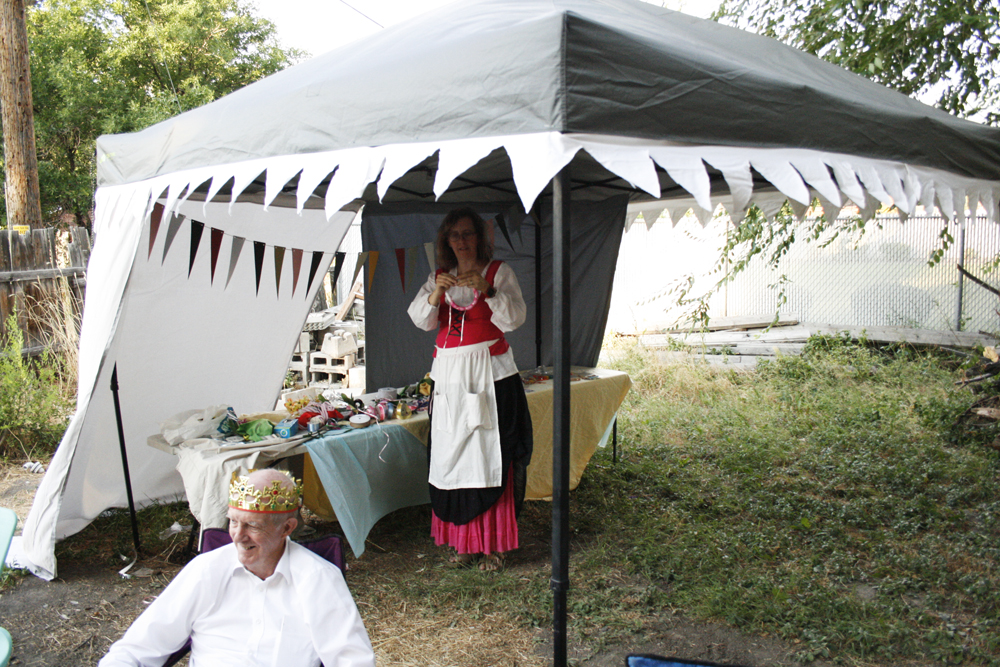 and a big tent for food. 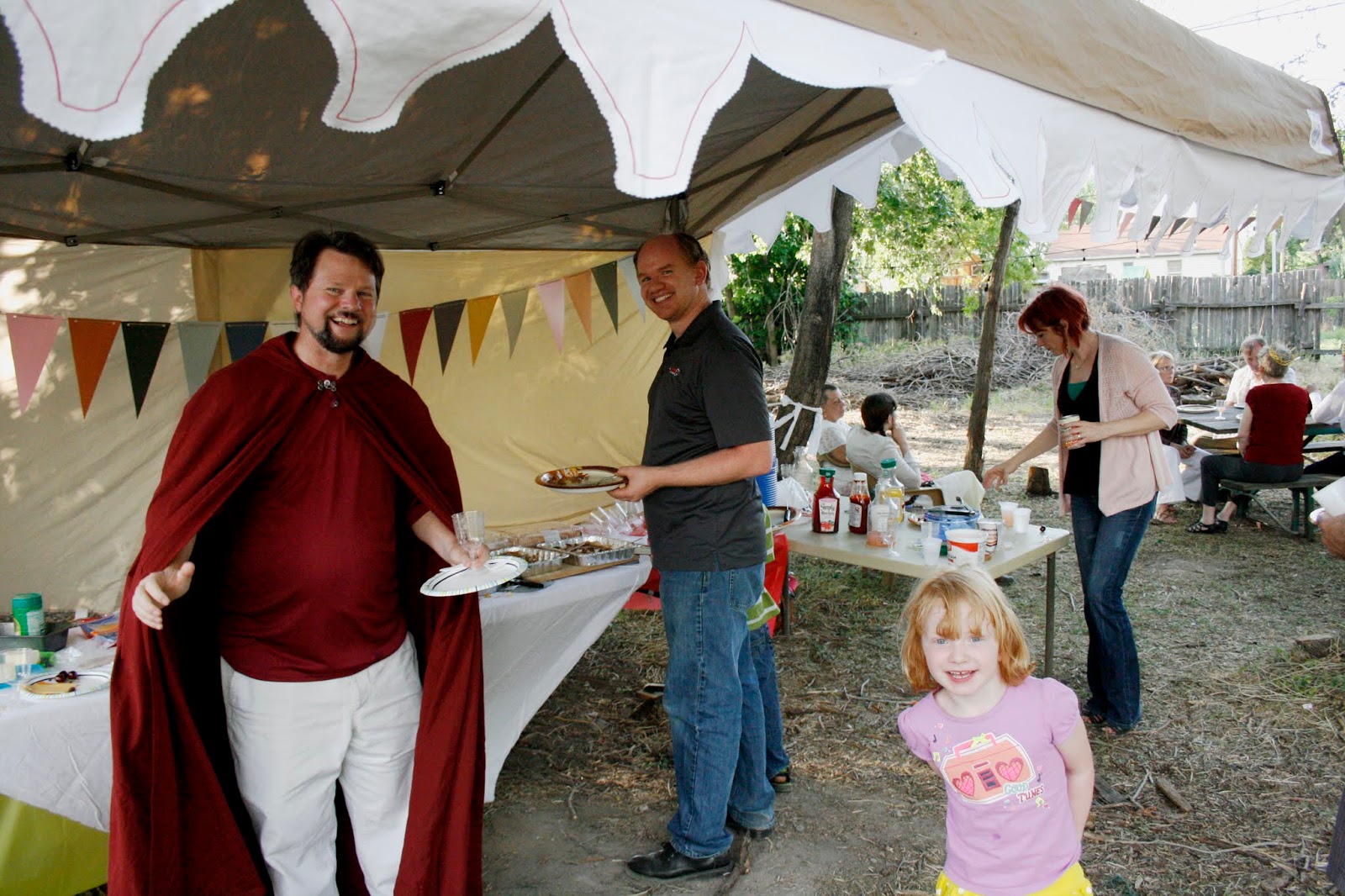 The bunting along the back there is just made out of paper. Cheap and Easy-Peasy. Well, easy for me. Fae spent hours cutting and assembling bunting, because she is a champ.

Here is a shot of the "entrance" to the backyard. You can never have too much bunting. I know the truck sort of ruins the effect, but what are you gonna do? 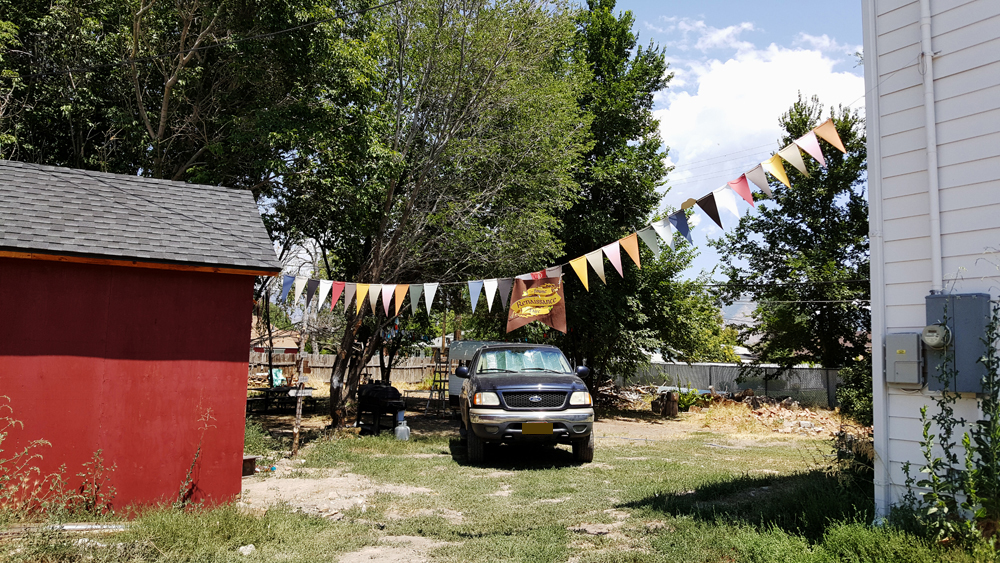 Here is a close up of the sign I made: 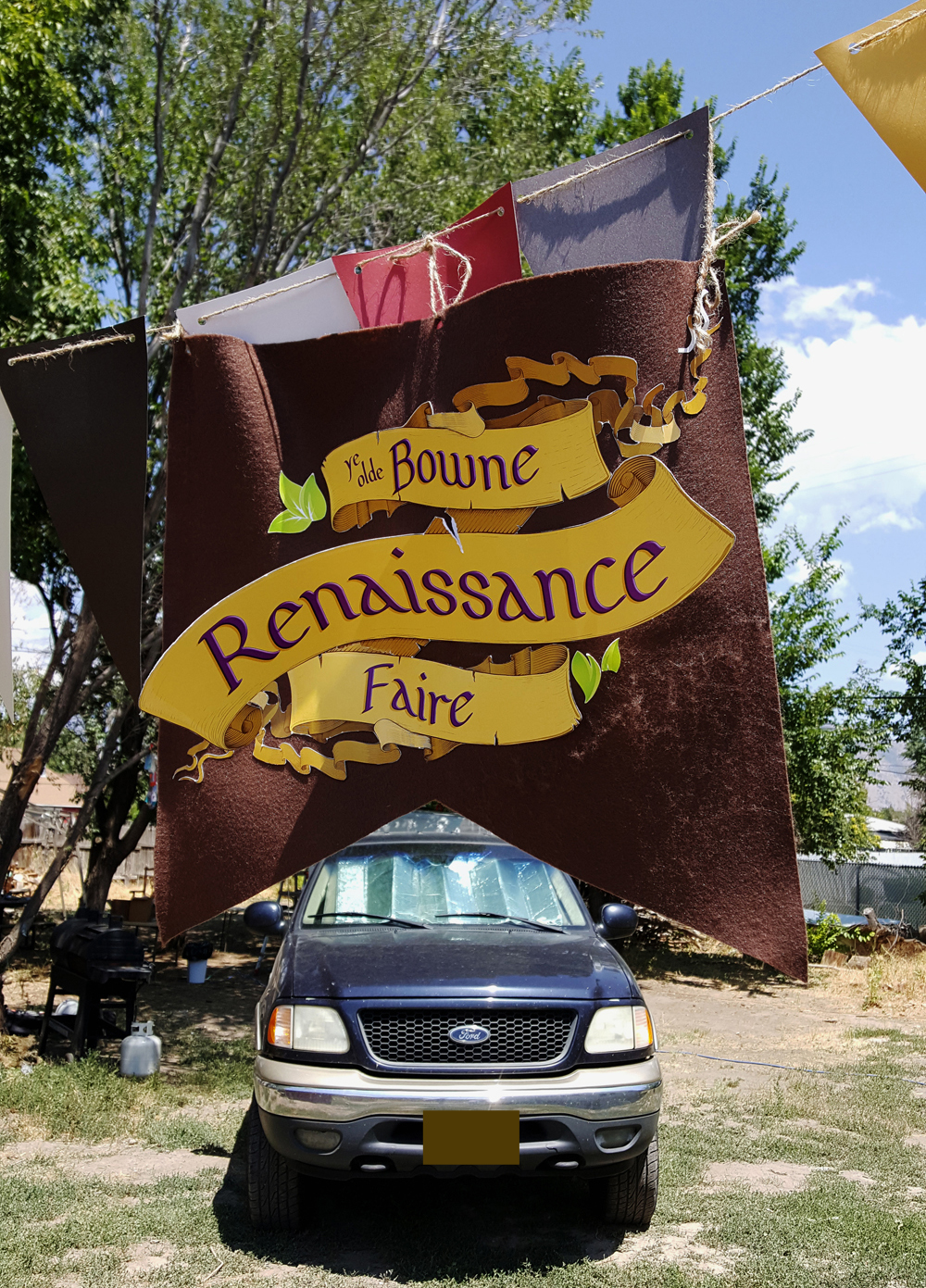 I bought the banner art, and then filled it in with words and had it printed at a local print shop. Then I taped it to a big piece of felt because that is what I had. It DID NOT work well. Paper and fabric are not great friends when you stick them in the wind together. Faralee also spent some time making some rag bunting, which had a very nice effect, but I don't have a decent picture of it.

Then there is this, cuz why not? Cardstock glued to cardboard, just like in ye olden times. 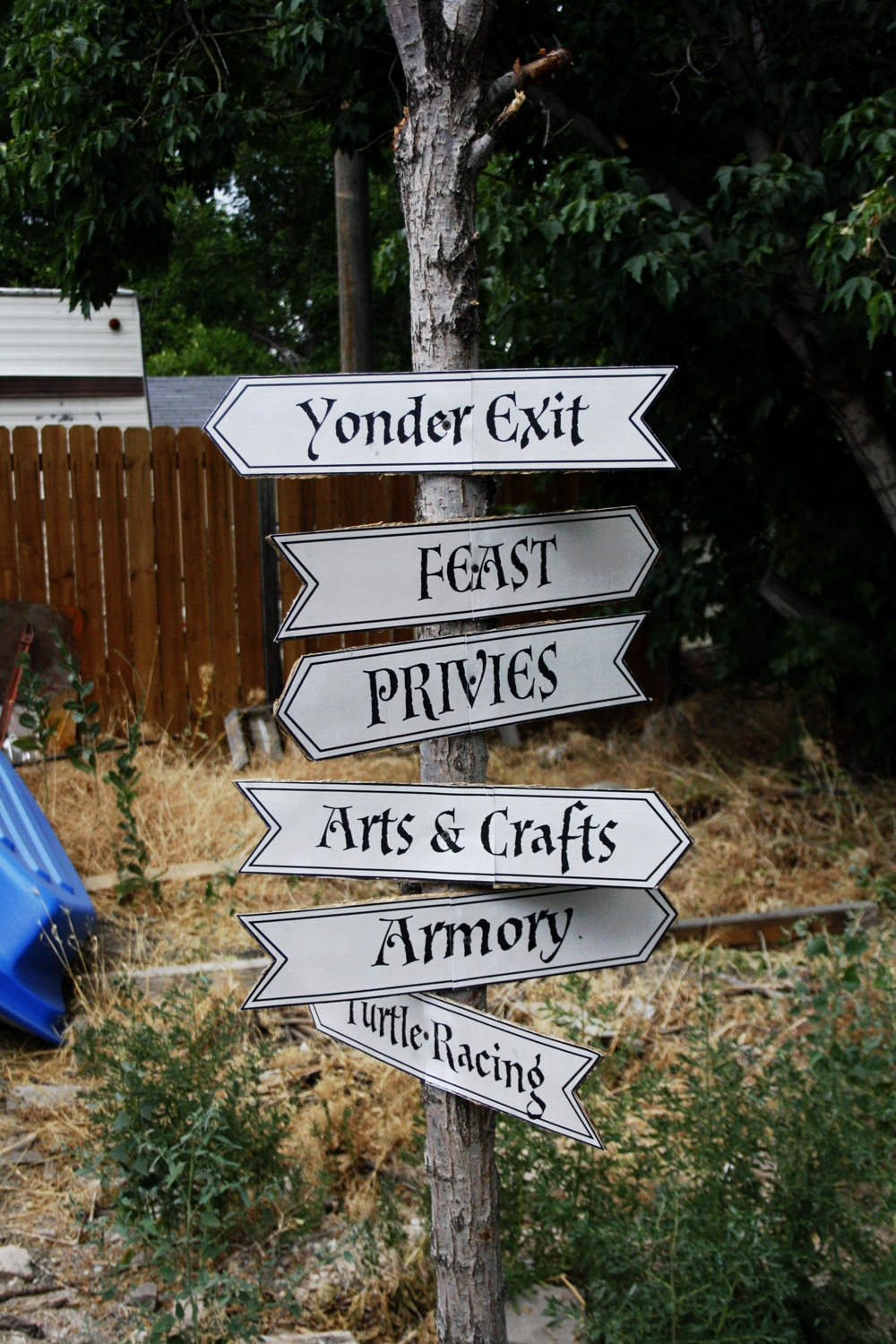 Why did I write some of the words in all caps and some not? I couldn't tell you.

We also needed a sign on the food tent. I found images of blank wooden signs and added the words. They are just printed on card stock (two pieces that I taped together so they were sturdier and could be read from both sides.) 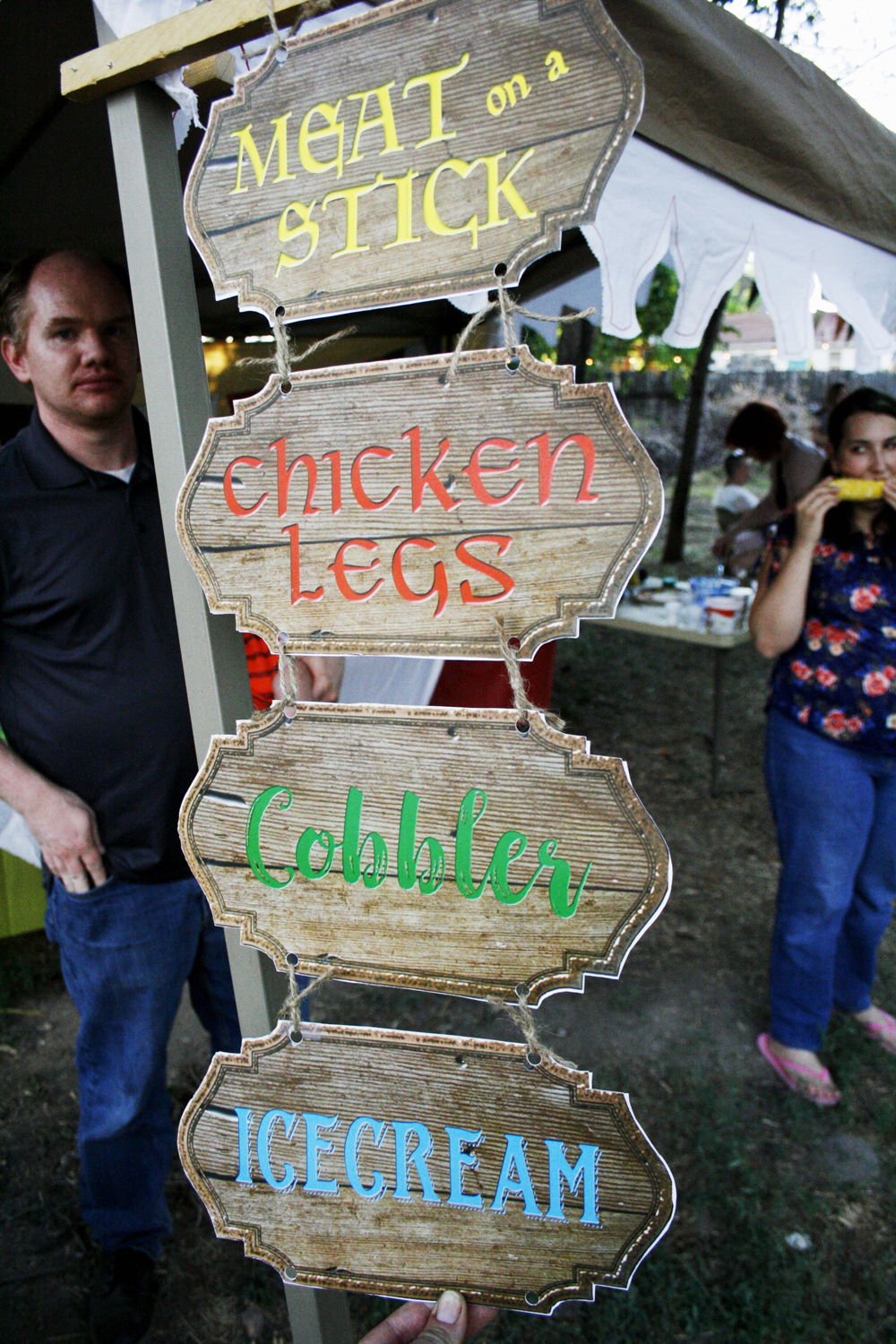 STEP 4: Make Lots and Lots and Lots of Food.
As you can see we served Meat on a Stick (Brats stuck on a skewer), Chicken Legs, Cobbler, homemade icecream and my sister Faemarie's phenomenal peach pie. We also had corn on the cob, grapes, cheese and crackers and probably some other stuff that I can't remember. I really wish I had a picture, but we ate it too fast.

The chicken was way too much work. It shouldn't have been, but it took forever to cook, and lots of us spent the first half of the party in the kitchen. So figure out something more crowd friendly when you have your own Ren Faire. 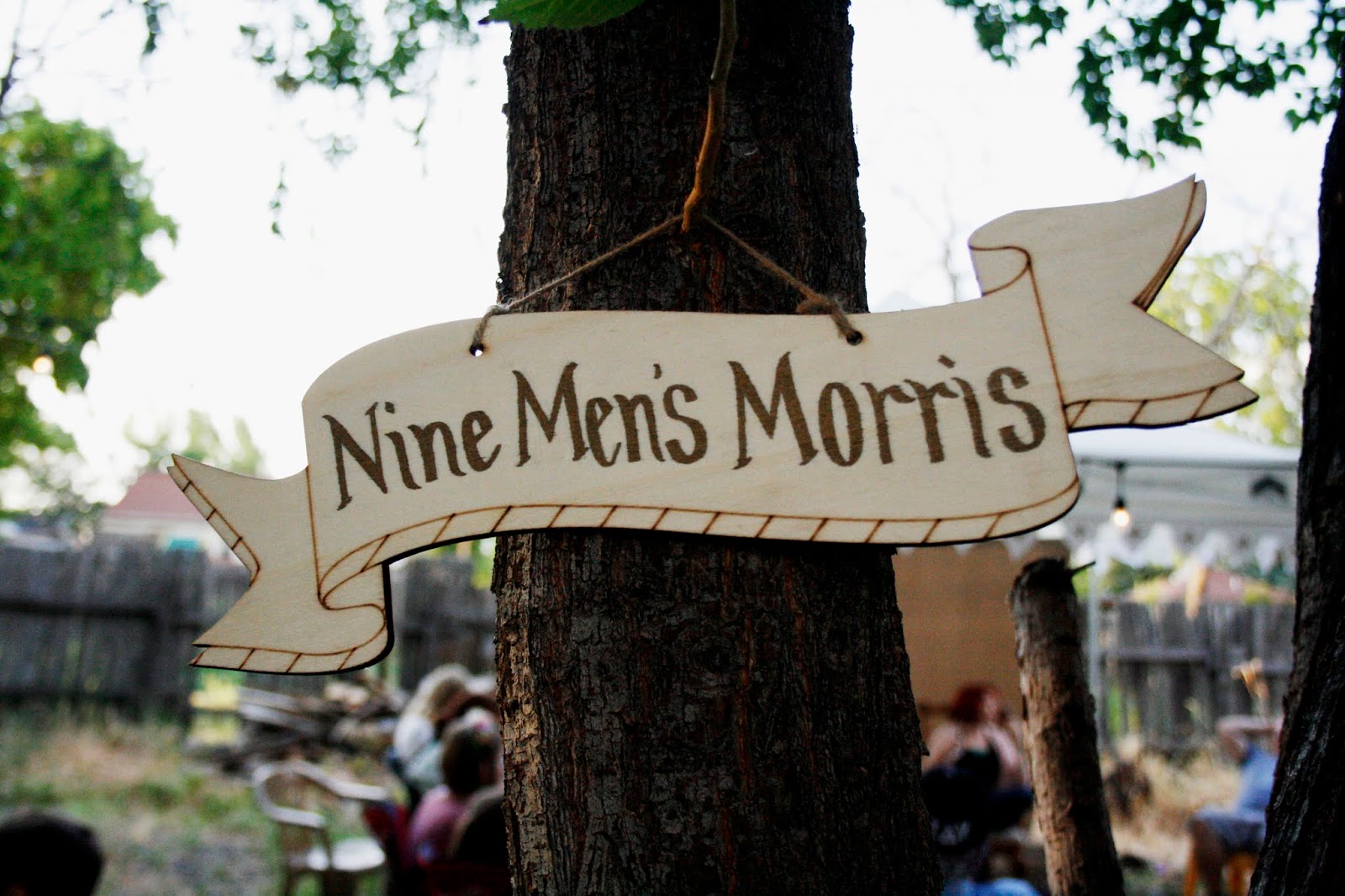 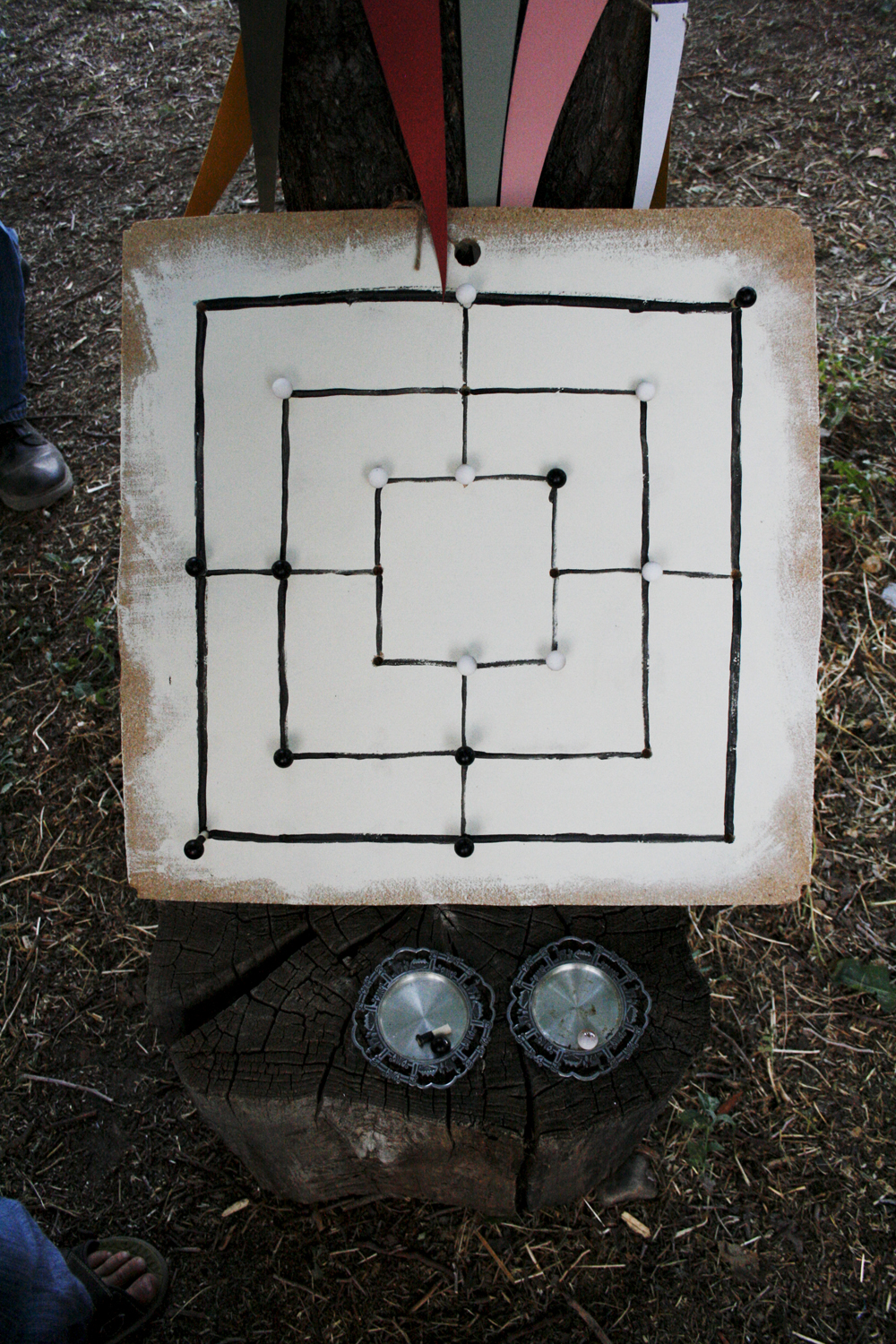 I haven't the slightest idea how to play this. Faralee made this too, so I just don't know what to tell you.

We also set up some logs for the kids to stand on and hit each other with sticks. 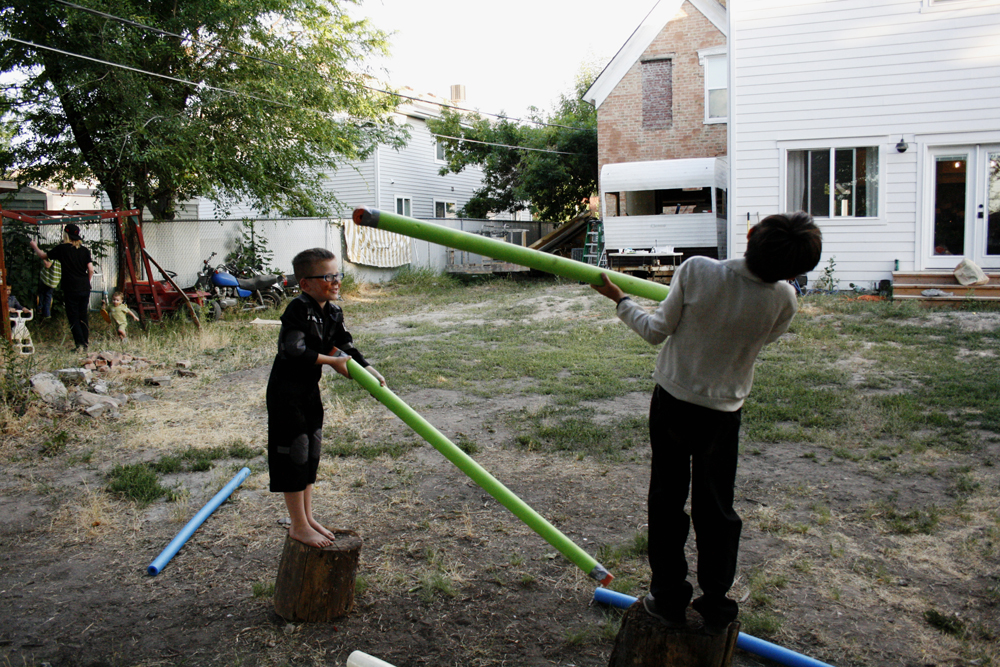 Whoever stays on longest wins!

And then we had face painting which some of the nieces were more than happy to oversee. 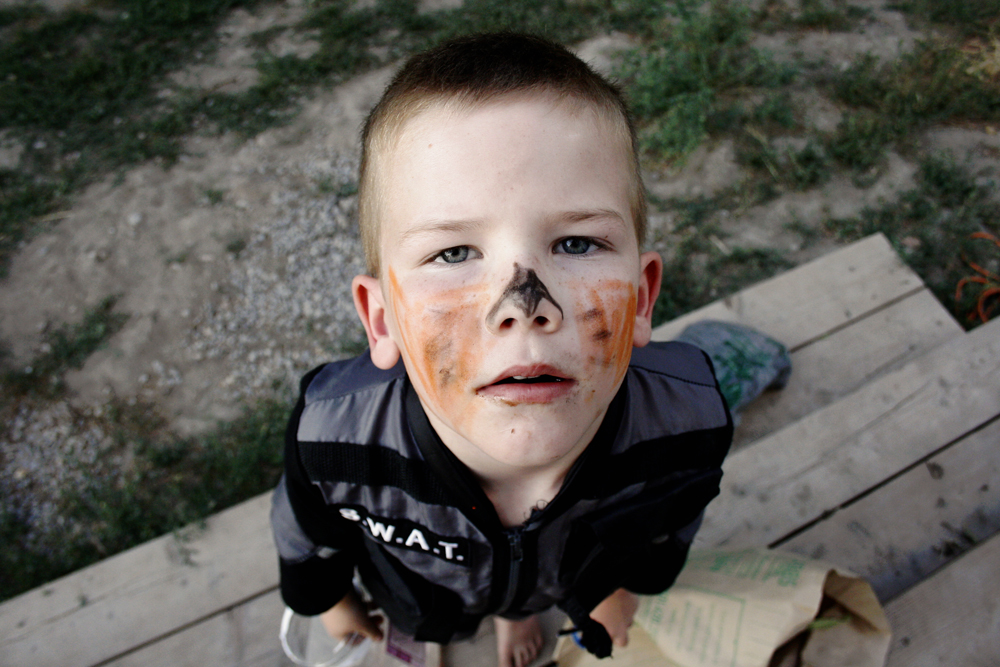 STEP 9 (I lost count. What number are we on?): Invite a Whole Bunch of People!

When my whole family gets together there are about 40 of us, so we're a decent group all on our own. But we also made sure to invite all of my parents siblings who live close enough to come, and some of my parent's good friends.

We told people to dress up if they wanted to. 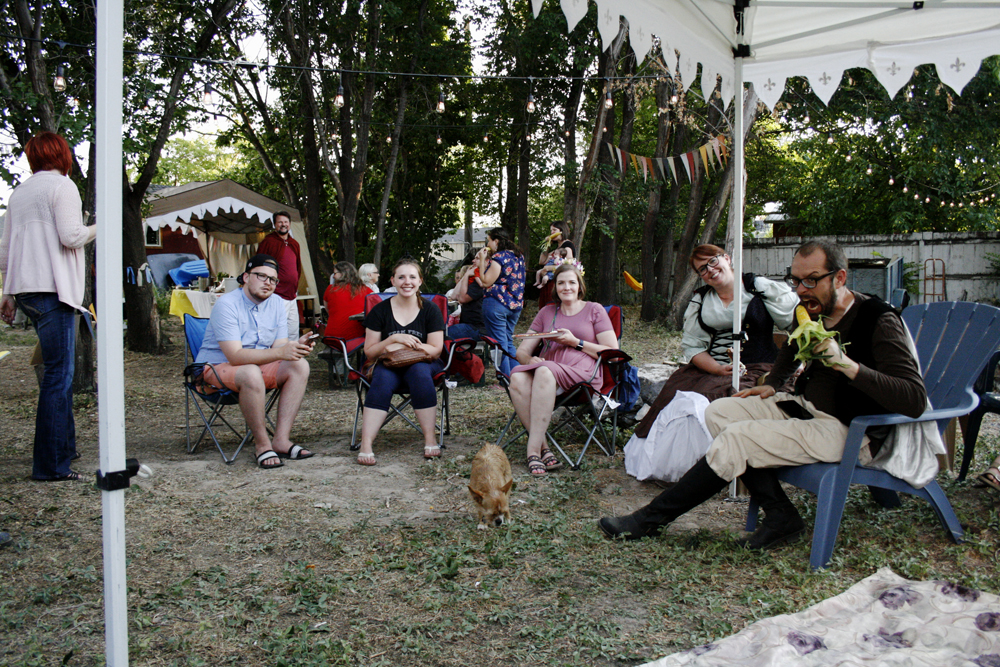 Some did, some didn't. Harrison put on some church clothes and Colin put on his SWAT costume and it was all fine, and fun and wonderful.

STEP 10: Don't forget to invite the Guests of Honor. Otherwise all your effort will be wasted.

At some point, you must sit back, and let your hasty and inexpensive efforts come to fruition. So you can just enjoy being together. We were fortunate enough that a bunch of nieces and nephews wrote and performed a play, all without any prompting from the adults. 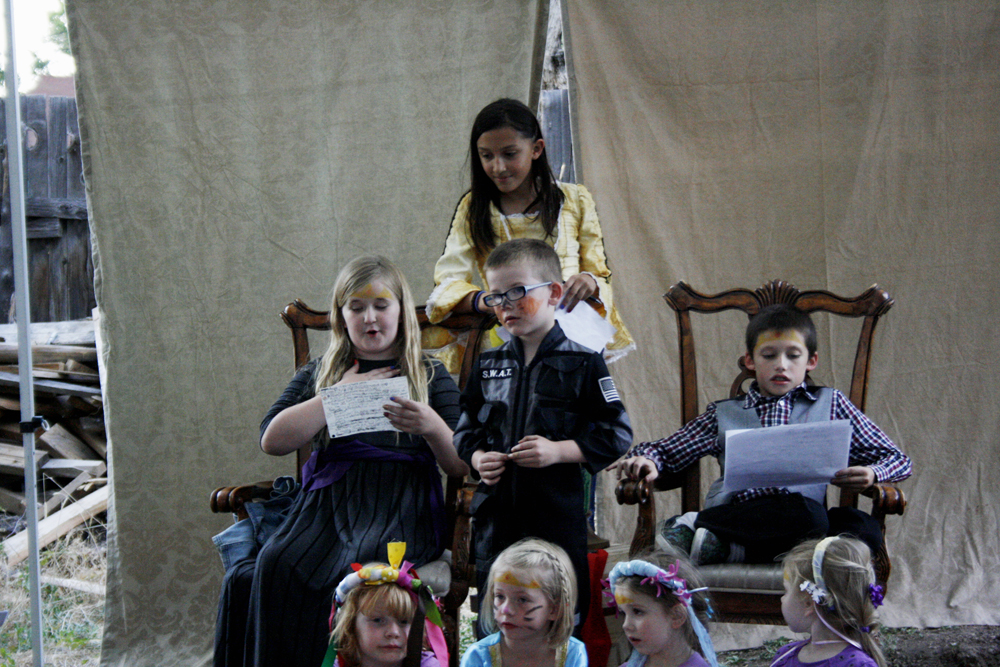 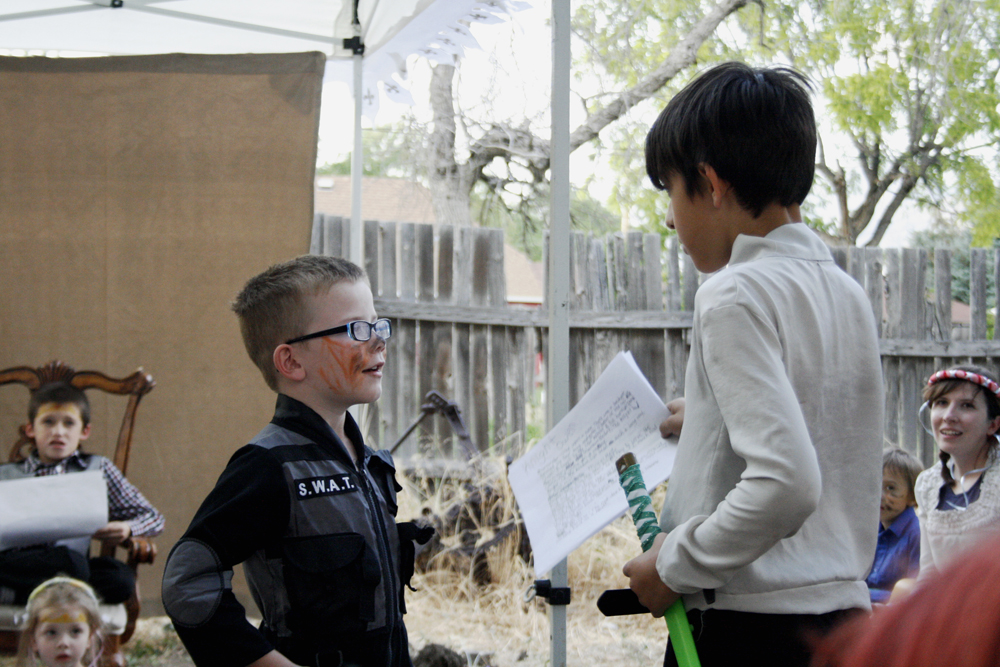 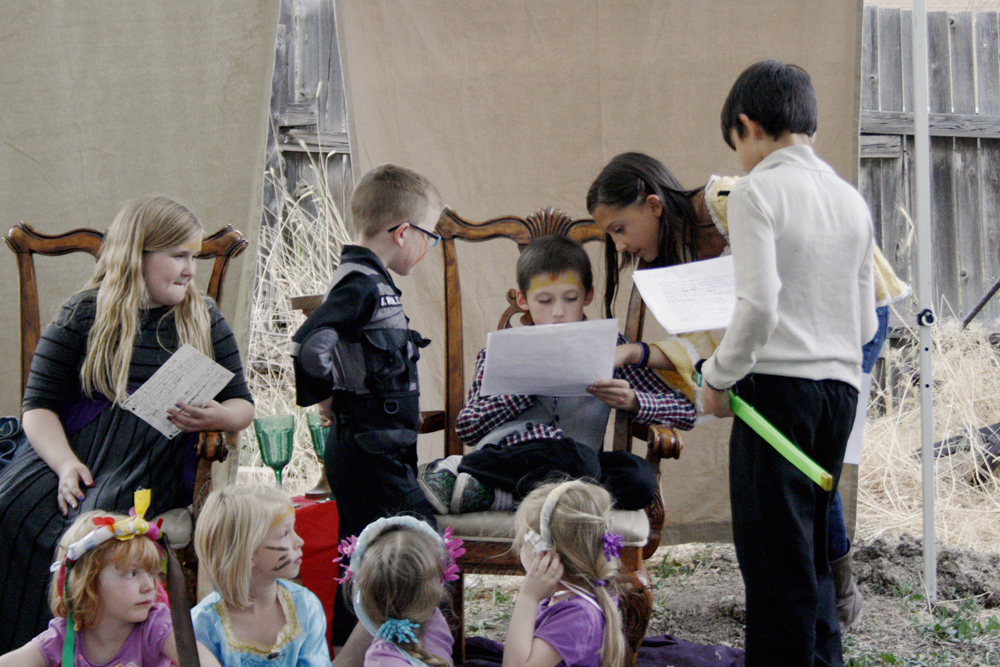 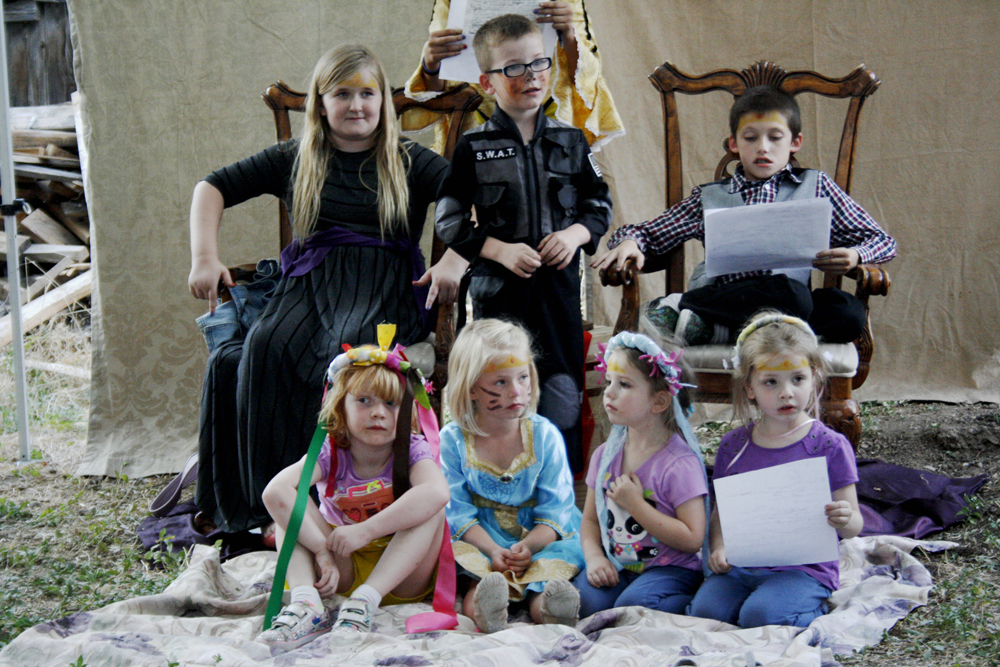 One of the little girls kept calling out from the stage "I'm doing a great job, Mom!"


We all did a great job. In fact, all in all we had so much fun that we talked about doing it again. Maybe every single year.

That was two years ago, and we haven't done it since, but my parents 52nd anniversary is coming up in July. Will this be the year we have another Renaissance Faire? Or will we decide once again that laying around eating Popsicle is a better use of our time? Who knows? Join us in two more years to find out!
Labels: How To's & DIY's