I owe you guys an apology.  I believe a person can never say I'm sorry too often, so that is why I want you to imagine that I am standing next to you, whispering "I'm sorry" in your ear over and over and over, all day, in kind of a creepy voice (cuz that is the only way I know how to whisper).  Then maybe you will really feel apologized to.  Cuz I promised I would tell you how we did Richard's Steampunk costume and my steampunk gun and there you all are, waiting with baited breath and heated up Hot Glue Gun, Rub 'N Buff at the ready and I am over here just living my life and stuff.   And that is not right.  I know that.  That is on me.  Feel free to throw very small, soft objects at me.

How to Steampunk Your Man!

Step 1:  Get permission.  Most guys do not like it when you dress them up in their sleep.  They are not dolls, dogs, or babies.  Be respectful, ok?  You might get away with a haircut while they are unconscious, but I really wouldn't go any further than that.

Step 2: Look at this picture and try to recreate it.

yeah, I am really feeling too lazy to go into detail.  Here is what I will tell you: to achieve Richard's look, use Simplicity Pattern number 2895 for the vest, massacre several leather belts and give the camera lots of smouldery looks.  This was all his idea.  The Steampunk, I mean.  Halloween a couple years ago he pulled up a "Steampunk" Google image search and said "Isn't this awesome?  This is how we should dress next Halloween."  And I said "You are sitting on my foot".  But see where it led us?

I think I've mentioned that Richard always wants to make everything himself (or get ME to make it for him).  So he has always saved every bit of leather he gets his hands on.   We have quite a stash.  He wanted to make his own hat, but I found that hat at Target in their Halloween costumes for $5.00.  So he took the satin band off and replaced it with a strip of leather.  His goggles are identical to mine.  See them here.  He designed the Gators (or whatever the manly equivalent of legwarmers would be) himself.  Used some old denim to make the pattern by wrapping it around his legs till it looked right, making marks, wrapping again, making more marks, and then got me to sew it all together.   If you want better instructions than that, just ask. 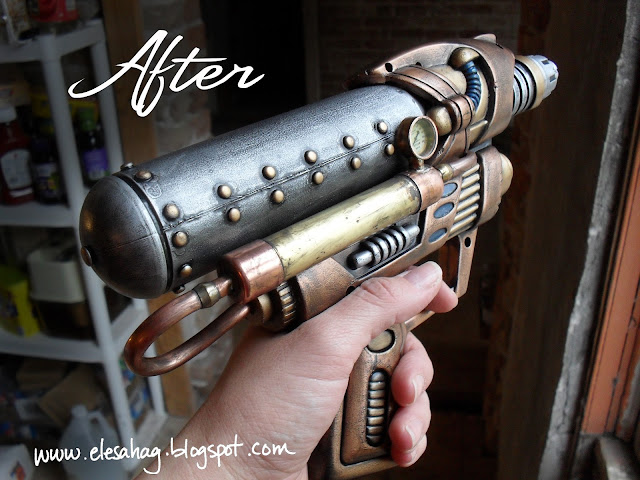 Here is how it looked when I bought it for $1.99 at a local thrift store. 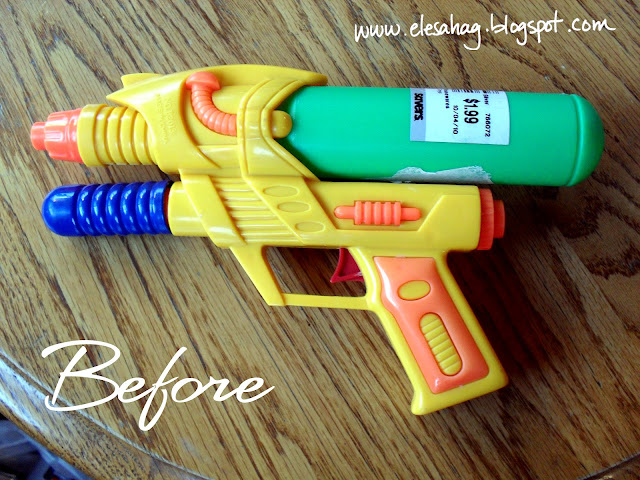 I know.  Kind of a rip off, right?  I shouldn't have had to pay more than 50 cents for it.  But it was the size and shape I was looking for, so I splurged.  Richard told me later that when I bought it he thought it was a really stupid gun and there was no way I could turn it into a decent Steampunk gun.  But he also admitted that he was wrong and it did turn out cool, so TAKE THAT, Past Richard!

So here is the low down.  I took off that blue thing in the front cuz it was dumb, and then sanded the whole thing down.  Not really carefully, I just wanted the paint to stick, and didn't want the gun to be too smooth and shiny.  Then I took I knife and stabbed and cut and generally mauled the whole thing till it looked good and thrashed.  I wanted it to look like it had seen a few battles.  Then I spray painted the whole thing a matte black.  Next came the Rub 'N Buff.  (which I talked about HERE) And away I went!  Rubbing on a little gold here, a little copper there, and maybe some silver over here for kicks! But I needed something to breakup the monotony of the cylinder on the back, so I drilled tiny holes along the seems and superglued regular metal brads into the holes.   Then, to add a little color, I picked a couple spots and painted them with blue fingernail polish. THEN I sprayed the whole thing with a clear top coat to keep the Rub 'N Buff from rubbing off. 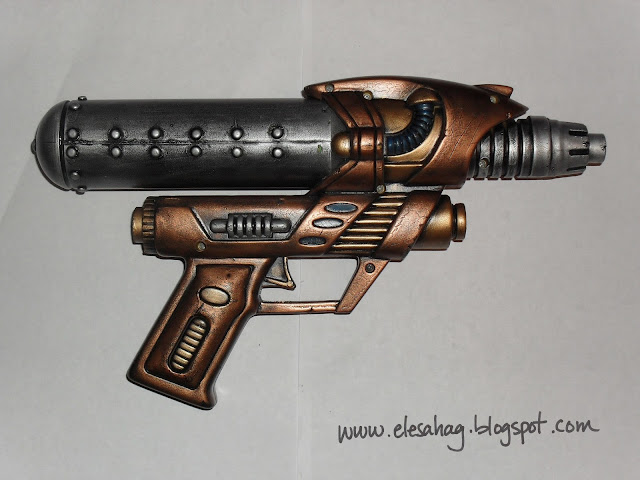 It was good, but not good enough!  I wanted more!!

I made the gauge by cutting a 5/8 inch tube about 1/4 inch long.  I found a picture of a gauge online, shrunk it down so it was the same size as the tube, printed it off and cut it out.  We had some sheets of thin, hard, clear plastic that we cut into a circle the same size, and glued it and the picture inside the tube.  Superglue.  My very favorite adhesive with special abilities.  Richard soldered together some copper and brass tubing into a fancy little doohickey, we glued the gauge on top, then glued the whole thing to the gun. 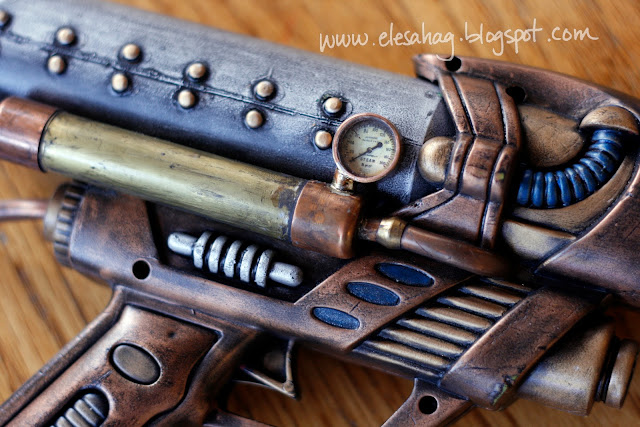 Then I pranced around carrying it just like a proper, well-bred, heat-packing, zombie-killer would.  Truth be told, I wear it almost everyday.  Here is me today, posing before I take out some cats in the backyard.  Pew! Pew! 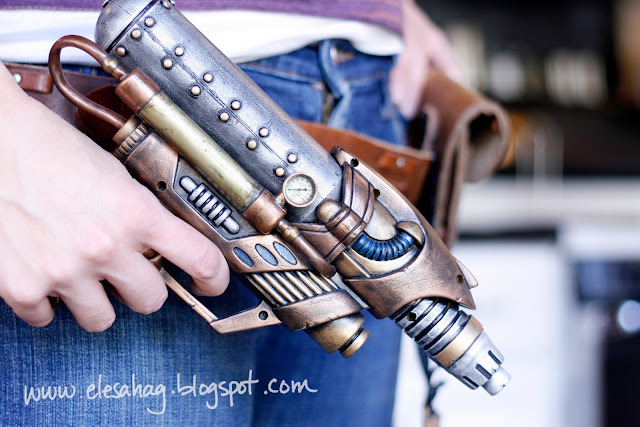 I made several guns before this one, to practice, and some after, because it is just so fun.  Here are my favorites.

And that is all.  I have probably blown your mind enough for one day.  And I have used mine completely up, so I think I'll go watch "Single's 2nd Ward" for a while and recuperate.  Thank you for joining us.