In 2014 we were about a month away from tearing off our kitchen and having a new addition built on to our house.  We were trying to get our Family Room drywalled and completed so that we would have somewhere to put all our stuff during the remodel.  Halloween was a couple of days away and I still needed to make the Fez for Harrison's Doctor Who costume and make some adjustments to Colin's Harry Potter robe. Obviously we were bored out of our minds, so we bought a Vintage Travel Trailer to restore.

I guess Richard and I are both the same kind of crazy, cuz we both thought it seemed like a good idea.  I fear for our future, I really do.

I'd wanted a tiny travel trailer forever.  Or at least ever since I saw a picture of one on the internets 5 or 6 years ago, which is basically the same as forever.  I used to look at used ones on KSL every once in a while and dream.  But then our builder told us we should find somewhere else to stay while they worked on our house.  I looked at some places for rent locally, and most of them were over $1000 a month and I suddenly realized if we got a trailer we could stay in that and not have to pay rent at all.  It was brilliant.  Richard was totally on board.

Around the time the reality of sleeping in a trailer during winter was finally dawning on us Charlie told us we could stay at his parents house for $100 a month which sounded MUCH nicer.  But by then the trailer idea had gotten hold and wasn't about to let go.

We found a few we really liked.  I fell in love with one for sale in Idaho for around $2000.  Then we fell in love with one in Southern Utah for about $1400.  We knew it was probably a bad idea to spend that much and drive that far, but then on 10/25/14, we found one for sale 5 miles away for $500 and we both just thought, "Why Not?"  It was in better shape than we could have hoped for the price and we are crazy people and we bought it.

Then we parked it. We had time to work on it a little bit, but mostly our house remodel took up all the free time we had. BUT NOW, almost 3 years later, the travel trailer is back and we are ready to work on it again. I am a bit nervous showing it to you before we finish, because, WHAT IF WE DON'T? Hopefully, knowing that both of you are watching and waiting will motivate us to keep working on it even when we run out of steam. 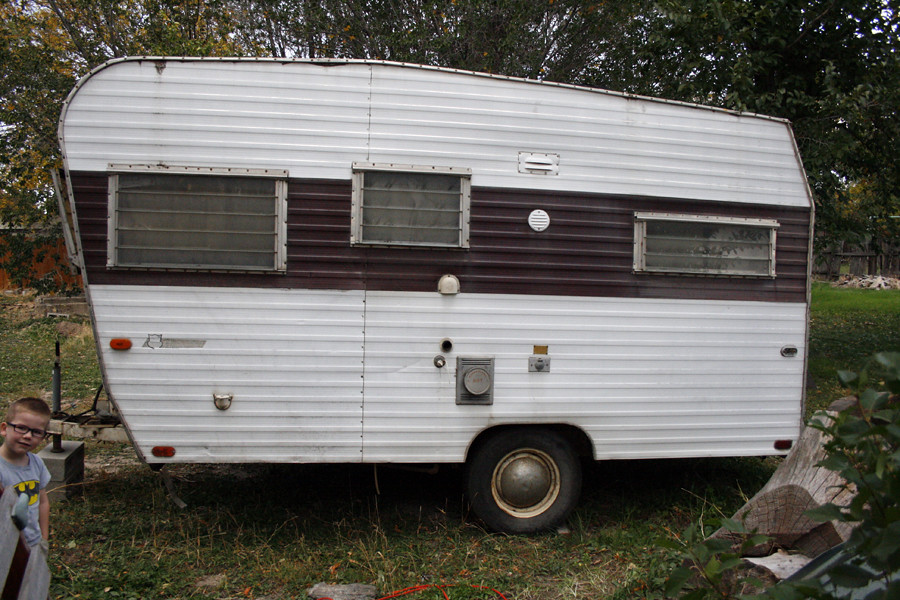 She is 16' long, I think?  I couldn't take a picture of the other side at the time. There was a shed in the way. Sometimes a person's back yard is more like a junk yard, and that is okay 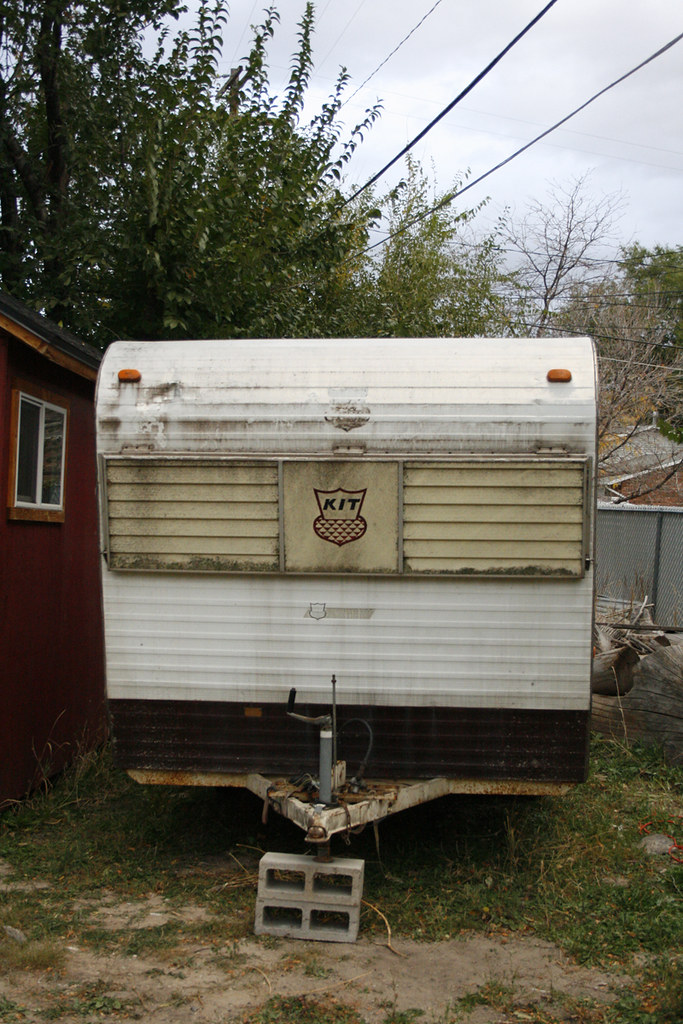 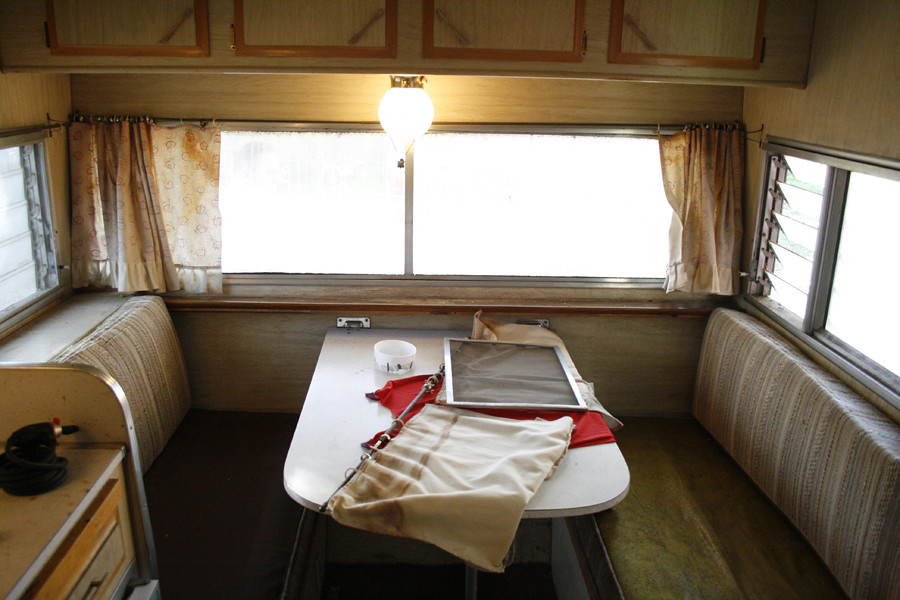 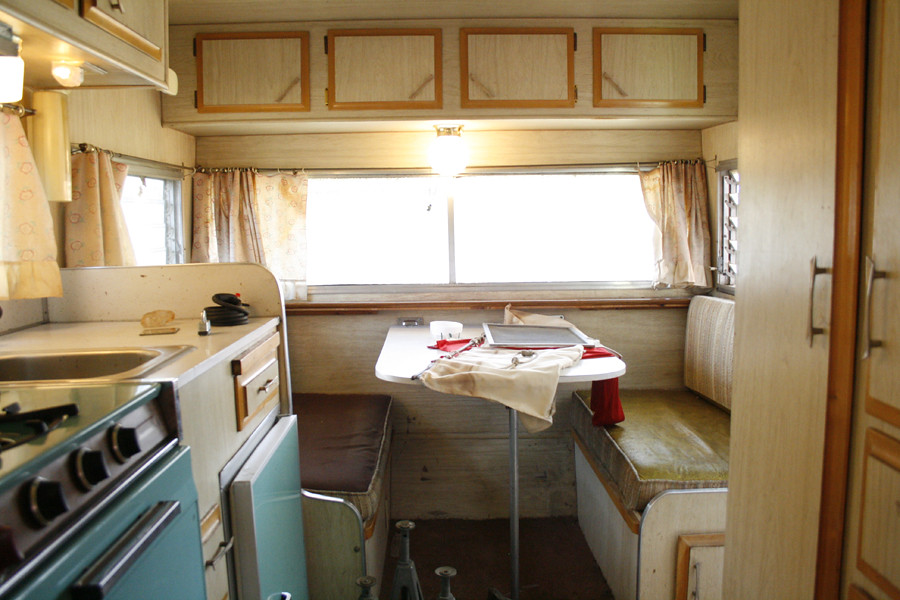 Look at these adorable appliances.  How could I resist? 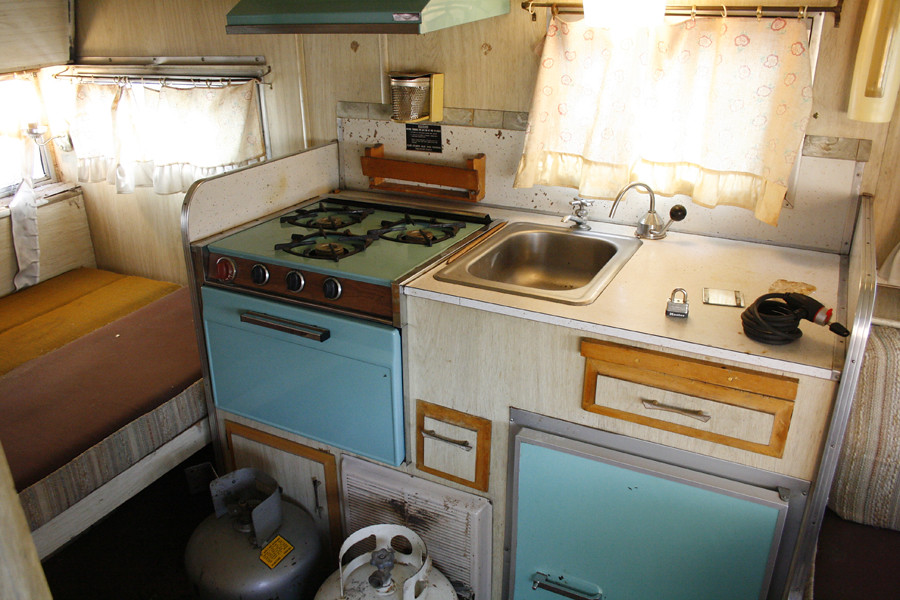 The guy we bought it from said the curtains could probably use a good washing.  I was thinking a good burning would be more like it.  Those curtains ended up in the trash almost as soon as we got home.  I don't think any curtains were meant to last 46 years. 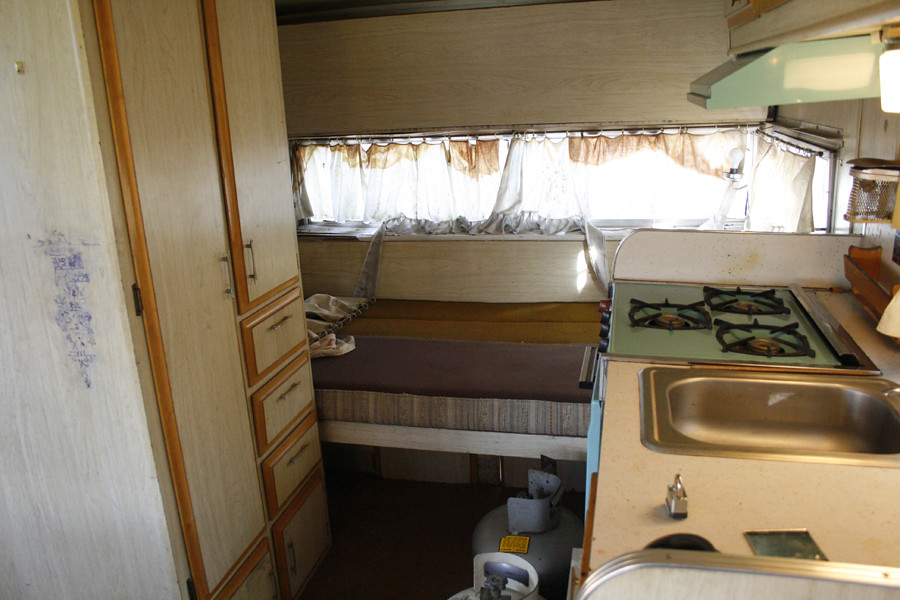 There is a bunk bed that folds down above that bench in the back.  Behind it there is some water damage in the wall.  They said they had some squatters living in the trailer and they left the tiny widow above the bunk bed open.  So that is a fun little piece of history to know.

But look at this ceiling!  49 years old and that ceiling looks pristine.  The perfect ceiling sealed the deal for us, even with the water damage in the back. 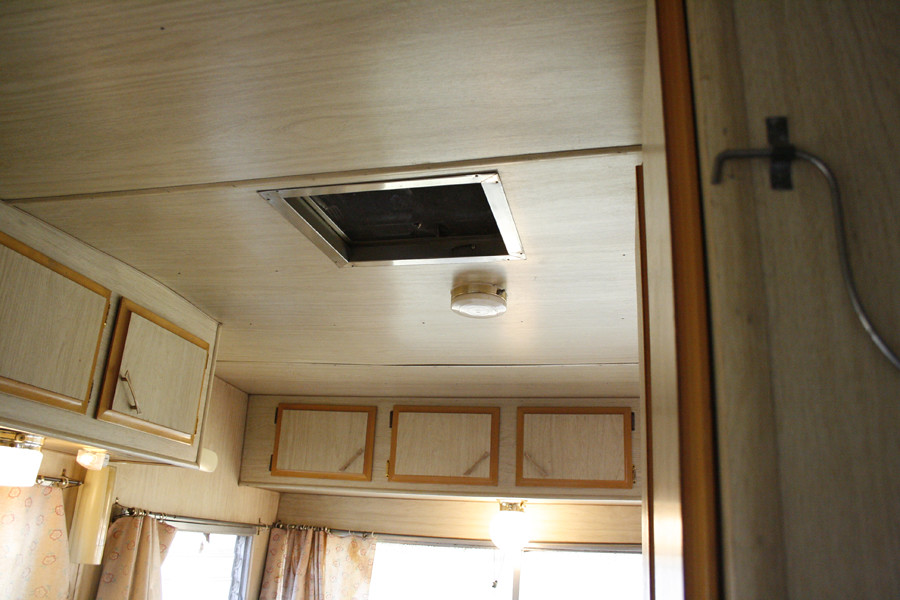 HOWEVER, there is a hatch in the back that we couldn't look at before we bought the trailer because it was backed up to a ratty old couch.  Look what we found in the hatch when we got home? 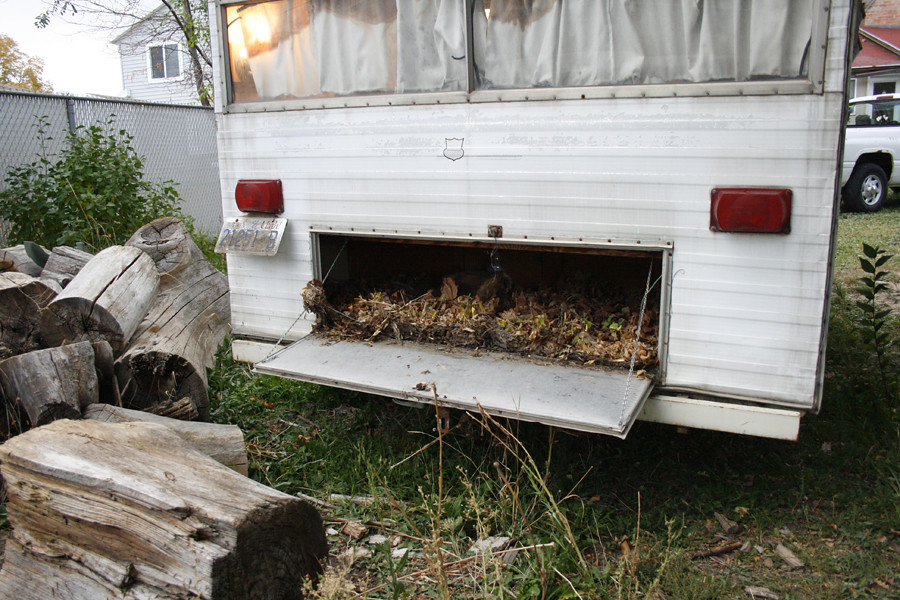 Uh, not a great sign.  All that wood is rotted.  I don't know if we would have bought it if we knew about this.  I doubt the owners knew about it.  So it isn't like they were trying to pull a fast one on us.  But we would have at least asked them to drop the price a couple hundred dollars had we known.

And that is all I have for you. I am SO, SO excited to finish up the project. We camp a LOT over here. And packing up and unpacking the stuff, setting up and taking down the tent, etc, just lose their magic a little every time we do it. Being able to hop in the Travel Trailer and take off at a moment's notice will change everything! I can't wait!