So.  Costumes.  I like making them.  The trick is finding a time and place to wear them, which I'm guessing is the reason people get so excited about Comic-Con.  We are all just looking for an excuse to dress up.

The most recent excuse was the premier of Star Wars: The Force Awakens.  (I am only 8 months late posting this).  Me and my sisters all decided to dress up in different outfits of Princess Leia's.  You can do fun things like that when you have roughly a million sisters. 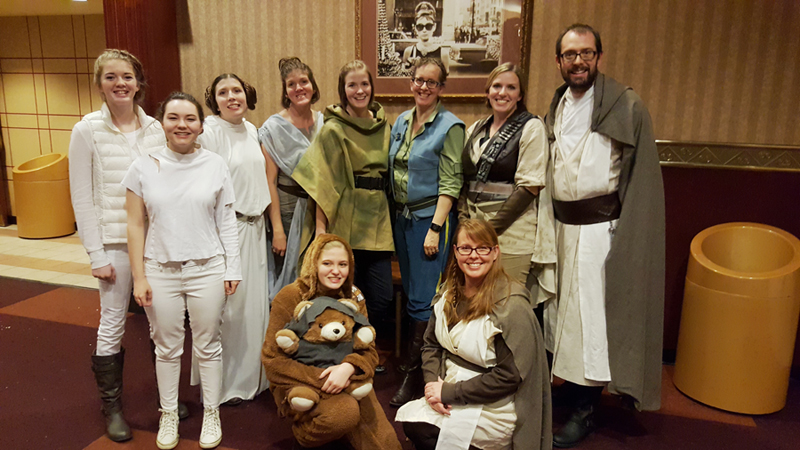 Just to clarify, one of the people in that picture is my brother, and a few are nieces.  Not everyone conformed to our Leia Manifesto.  Demi even went so far as to dress up as Rey.  She is such a rebel.


I wanted to go as Leia when she is wearing her Boushh disguise.  Here is a shot from the movie for reference:

It is awesome.  But I didn't feel the need to be totally authentic. I think the fun is seeing what I can change to make it work for me, and what I can put together based on stuff I already have. She is wearing a waist band and those shoulder things, but instead I just made a vest.  I made a tunic type shirt and some gauntlet sort of arm bands and then I just had to make her bandoleer.  That was my favorite part. 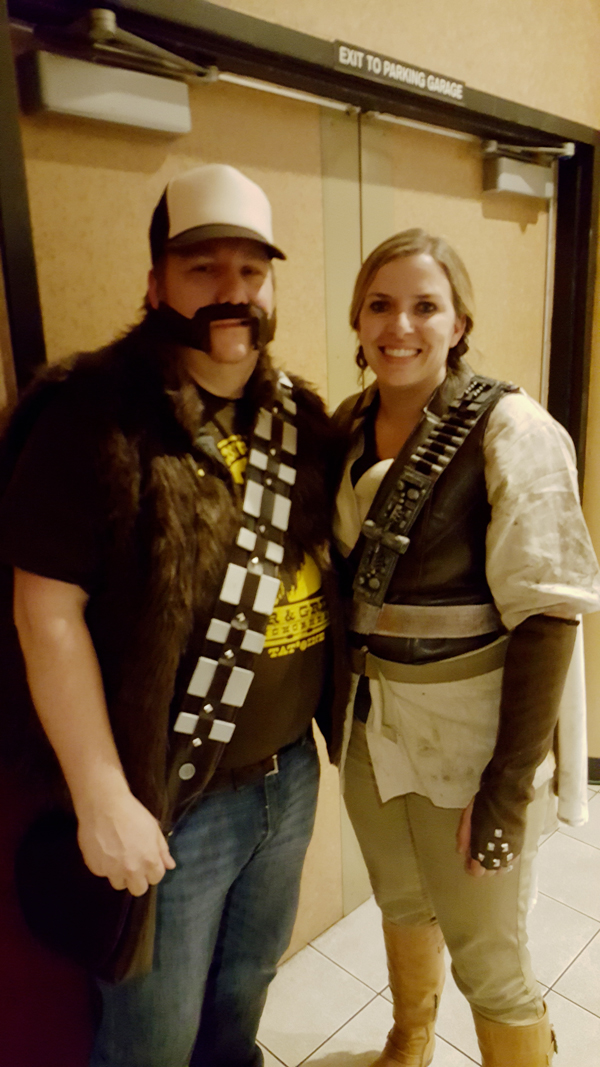 In case you are a giant nerd I should tell you that, Yes, I know I am wearing it on the wrong shoulder.  I looked at the picture and figured out what shoulder to put it on and carefully set it up so it would go on the correct shoulder, but maybe I am a little dyslexic because I clearly got it wrong.  Tragic! 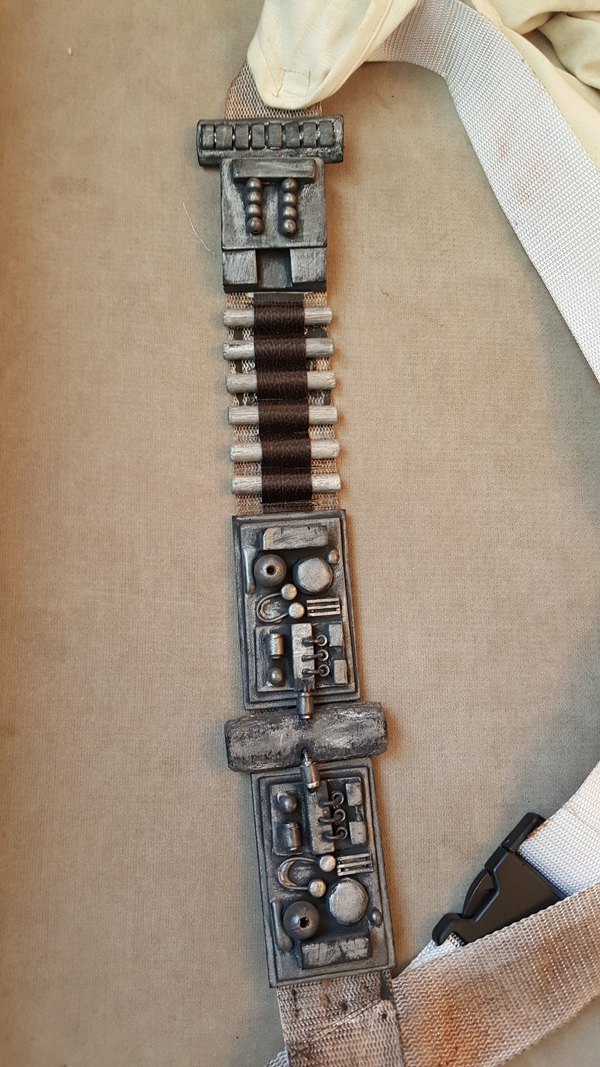 I made it by cutting some squares out of craft foam and then I went digging in the junk drawer.  I used hot glue to attach beads, wire, legos, brads, and more pieces of craft foam.  Then I spray painted it black and then brushed on some silver craft paint.  Those little dowels were made out of one long dowel, cut into pieces and painted silver.  Real technical like. Richard's costume came to me one night just as I was drifting off to sleep.  Or, at least the basic idea did.  Since I was dressing as Leia in her Boushh disguise, it only made sense for Richard to dress as Chewie.  But how to do it?  We considered him wearing a Chewie robe, Chewie pajamas, or a Chewie hoodie, but that night, in the hazy realm between sleep and wakfulness, it suddenly struck me that he should dress the way Chewbacca would dress if he were Human.  But it wasn't till I told Richard my epiphany in the morning that he said, "If Chewie were human, he would be a trucker."  And the costume just fell into place. 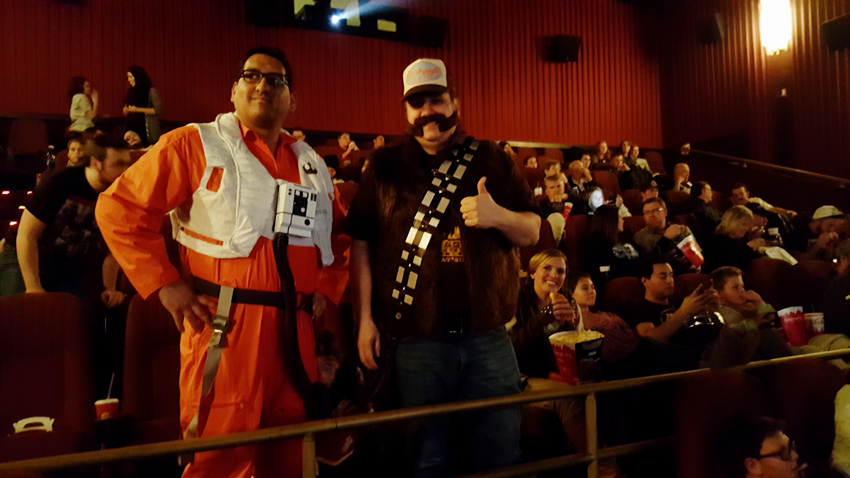 I apologize if you are here to look at pictures and attempt to exactly replicate the 70's Chewie Trucker  costume, because these are the best pictures I have.  Richard was nice enough to wear this for me once but I don't know if I can get him to put it on again.  You might be able to see the lack of enthusiasm in the above picture.  But it was a pretty simple costume.  I made a vest out of the only fur material I could find at Joann's.  He got a kicky little bag made out of the leftover faux leather from my vest, and more craft foam spray painted silver.  His awesome mustache is more of the same fur, just trimmed a bit, and glued to his face with some cosmetic adhesive.

The hat, however, was a bit of a disappointment.  I spent a ridiculously long time making this stencil to paint on the blank hat I had bought online. 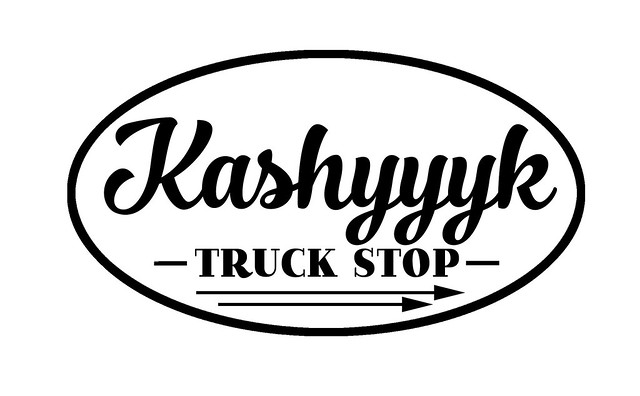 But then the vinyl wouldn't stick to the hat long enough for me to paint anything on it.  I eventually painted the stencil on some cotton fabric I had and then used spray adhesive to stick the cotton onto the hat, but that wouldn't stick either, and it fell off after a couple of hours.  What I needed to do was some sort of embroidery, but that was outside of my wheelhouse.  Maybe next year.  Maybe without the mustache I MIGHT be able to convince him to wear it again.  Maybe even just the bag and hat. (In the following picture, the rebel pilot is my brother in law with his son, Little Han.) 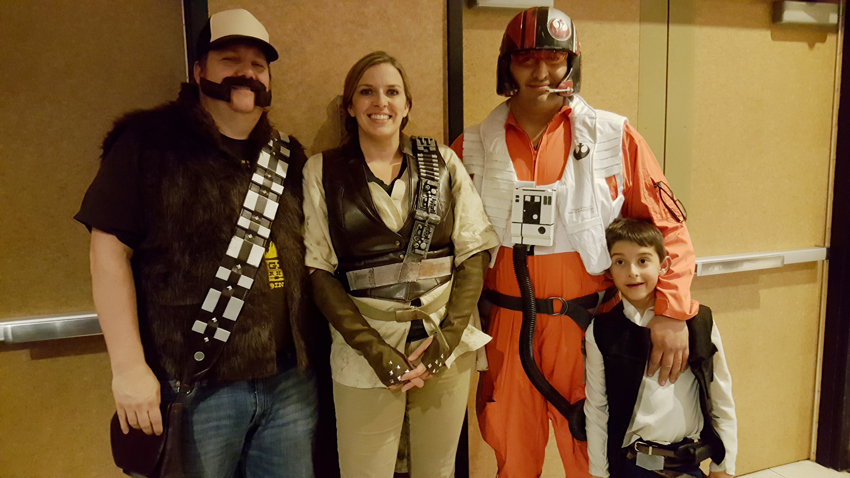 The secret to cosplay, I think, is to act like you DON'T feel at all foolish, when in reality, you probably do.  But you don't show it.  You strut your stuff like it makes you feel awesome.  And it is just possible that half of the people who see you sorta wish that they had gotten dressed up too.  You're an inspiration.  And you look fantastic!