Richard got better and look what happened? 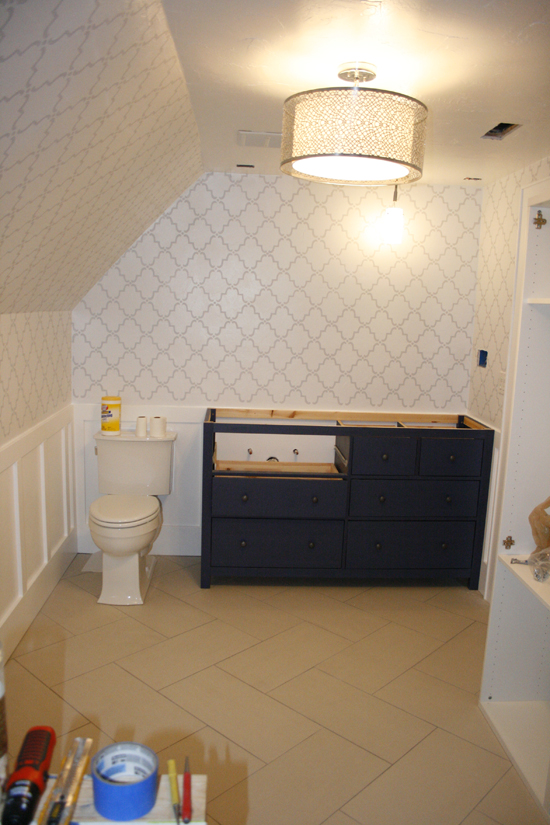 I probably shouldn't tell you this, but that stencil I used was actually the 3rd one I tried.  I'd love to say that after painting a small sample section of this one on the wall I just knew it was the one, but I didn't.  I COULD NOT decide.  They all seemed equally good.  So in the end I picked this one in this color combination because it meant I didn't have to repaint the sample I had just done.  It was the easiest.   I think sometimes choosing your spouse works the same way. 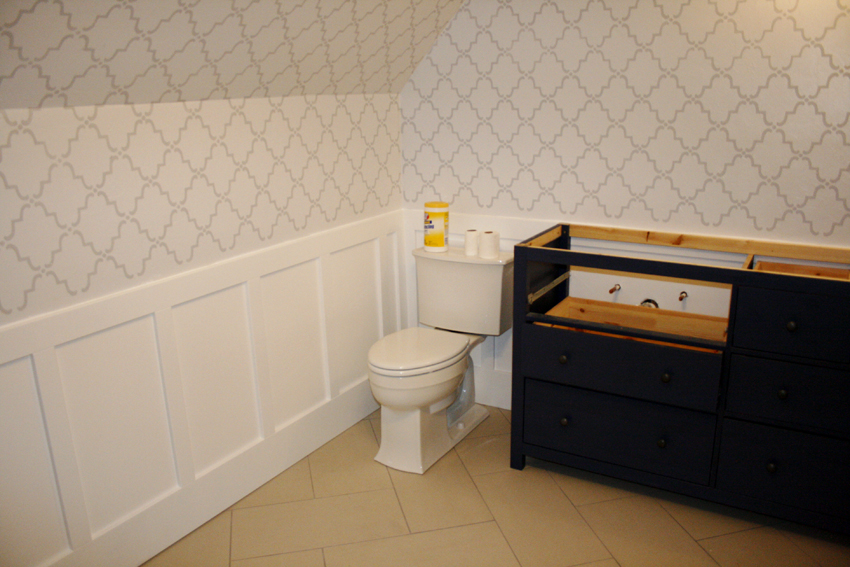 If you're thinking you recognize that vanity, you are right.  It is Ikea's Hemnes dresser.  Will it be sturdy enough to stand up to all the abuse it will no doubt get at our hands?  I don't know.  Will we regret using it?  Quite possibly.  Is it too late to be doubting our choices now?  YES.

At this point, my heart and soul really feel like we are done in here, but my brain keeps screaming at them that we are not.  Nobody ever listens to my brain though.  It rants and rants all the time and my face just sits there with a blank expression plastered onto it like usual.  Here are the things my brain insists we still have left to do: 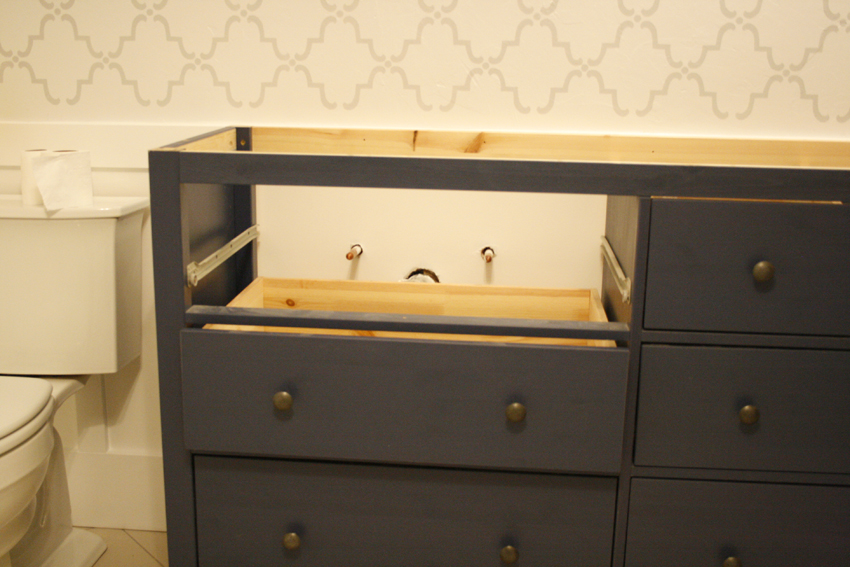 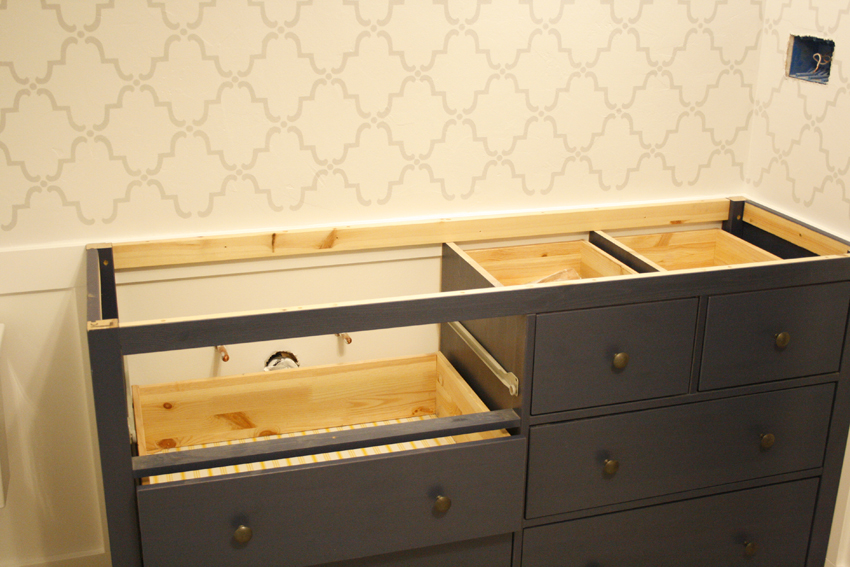 We've also got to put the counter top on.  Those things don't install themselves ya know.  It won't come in for another week or more though, so I guess we won't be washing our hands anytime soon. We've got to hang the mirror, hook up the outlets, and hang the rest of the pendant lights.  I like how you can't even see the pendant light in that picture.  All it is is a glowing blob hanging from the ceiling. 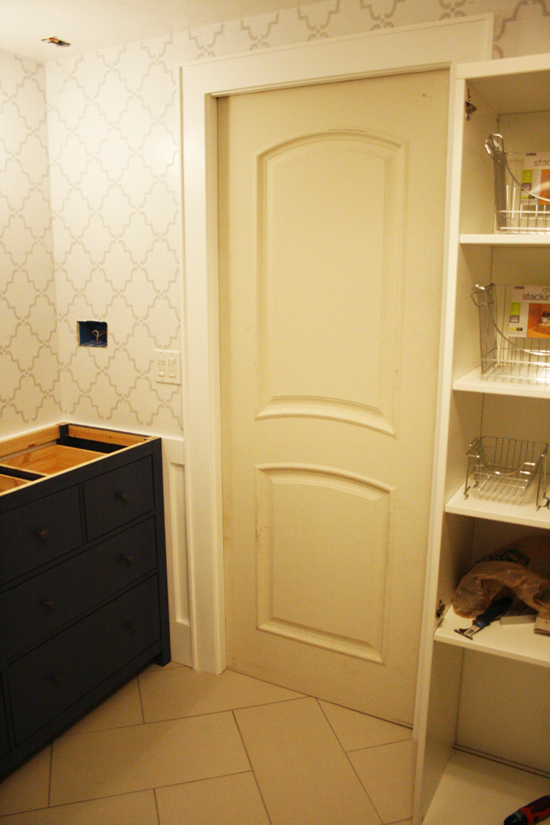 I've got to paint the door.  And we've got to install the "doorknob", or whatever you would call it on a pocket door.  After I closed the door to take a picture of it, I almost couldn't get it opened again.  Good thing there is a toilet in there now, or I might have panicked. 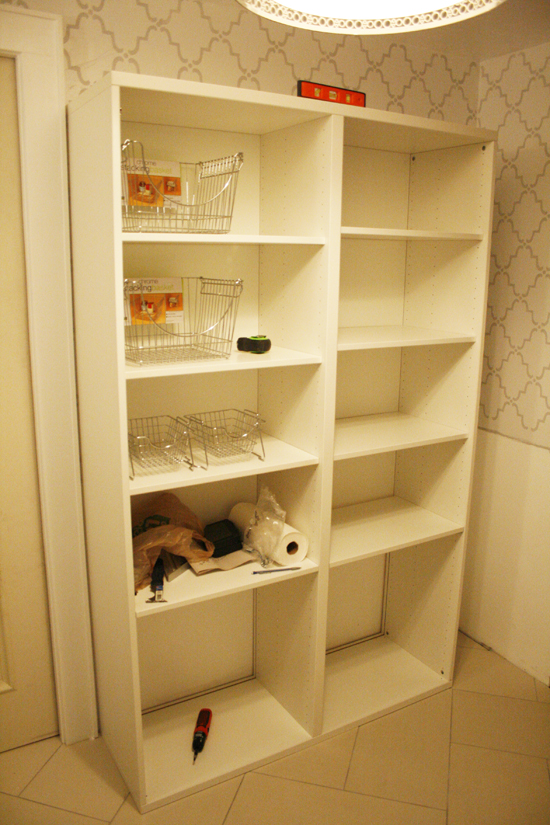 We've got to attach this cabinet to the wall, and put on its doors and what not.  This would be easier if my tiling job had been more level.  But it is really too late to be criticizing my work now. 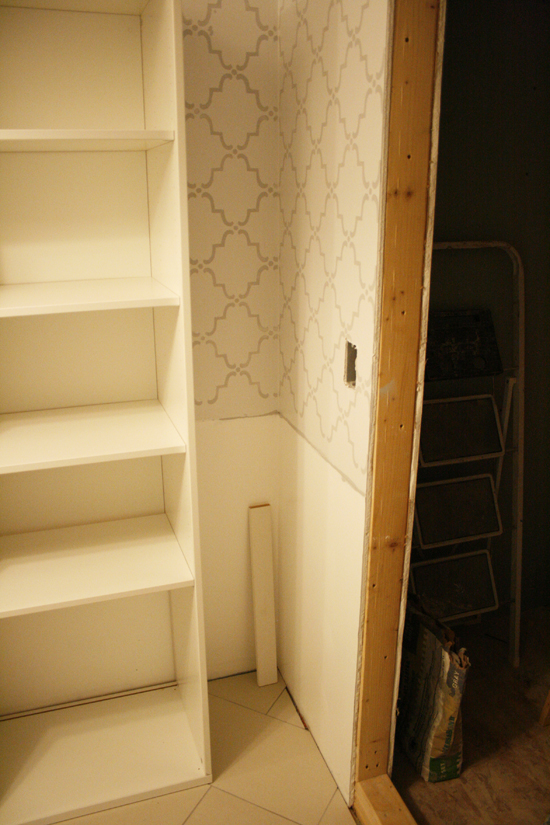 We've got to put up the wainscoting in that little corner up there.  It would probably be smart to do that before we attach the cabinet to the wall. 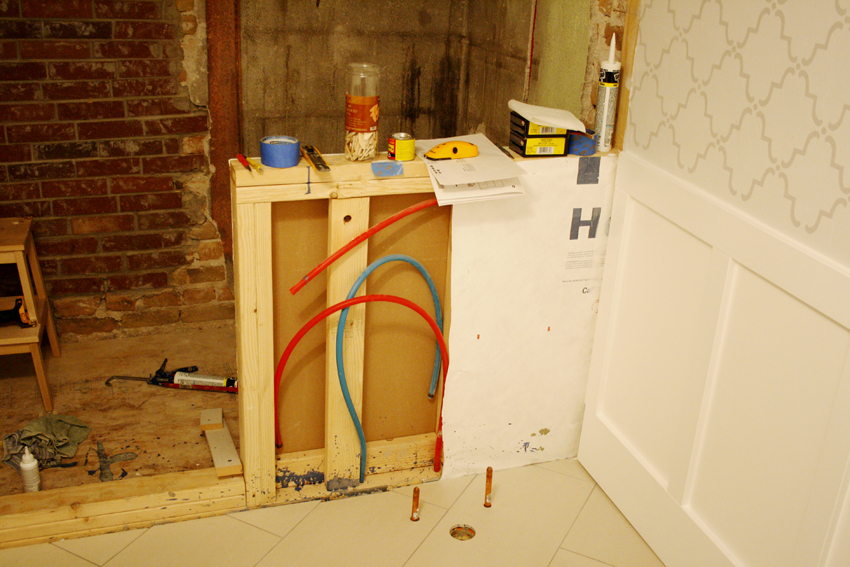 We've got to put up drywall and wainscot over here. I bet you thought we just forgot that spot.  But we can't do anything with it until we install some shower knobs on the other side or something. 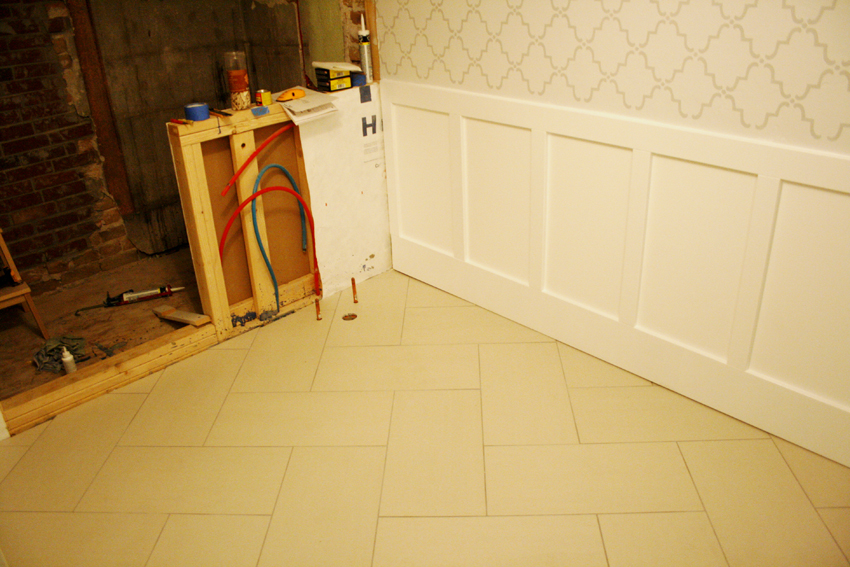 We've got to put the bathtub in, right there. The bathroom is so big and spacious right now.  I hope the bathtub doesn't crowd the heck out of it.  Before we can put the bathtub in though, we've got to get it refinished.  We were going to try to do it ourselves, but we are just too tired.  Luckily we found a guy who says he will refinish it at half his normal cost because his business is so slow right now.  Hooray for the economy. 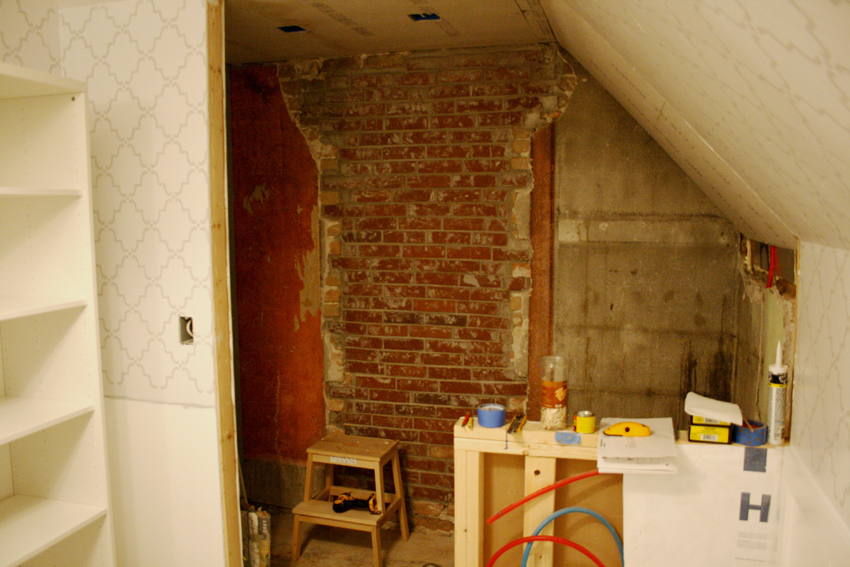 Last of all we have the shower, which is a whole nuther bag of cats.  It sort of makes me want to cry just thinking about it.  And then I remember that everything I stress and worry about really doesn't matter and that I am shallow and ungrateful.

So that is where we are right now.  Yesterday was Saturday and I had big plans for all that we were going to finish but then it snowed and for some reason we didn't finish anything.  I don't know why A led to B, but I know that it did.  Snow has repercussions we sometimes to don't expect.

And That's All Folks!
Labels: Remodeling