Hello my friends.  No doubt you are all extremely curious about the state of my bathroom.  Or else you forgot all about it.    I did seriously considering lighting the room on fire, but then I would have to keep going all the way downstairs to use the bathroom in the middle of the night.  And arson is wrong.  So they say.

Words are hard.  Less Talky, More Picture.  Here we do: 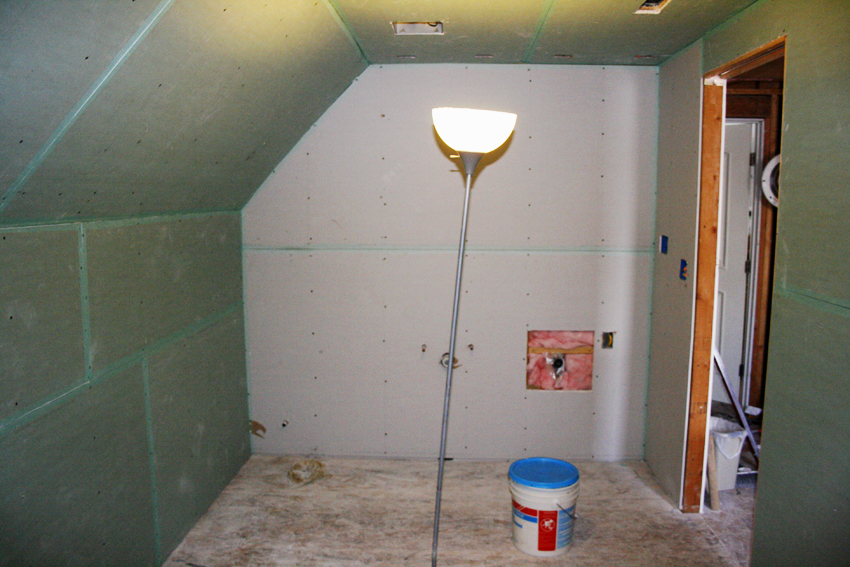 We finished this at about 11:00 pm  on a Tuesday.  Which almost killed my husband.  The next day he was so sick he couldn't get out of bed.  Strep throat, the doctor said.  I didn't know that remodeling can give you Strep, but it turns out that it can, so beware.

With Richard sick in bed that left me to do all the mudding, texturing and painting by myself.  I started to wonder if maybe he got sick on purpose.  It was all just a little too convenient. 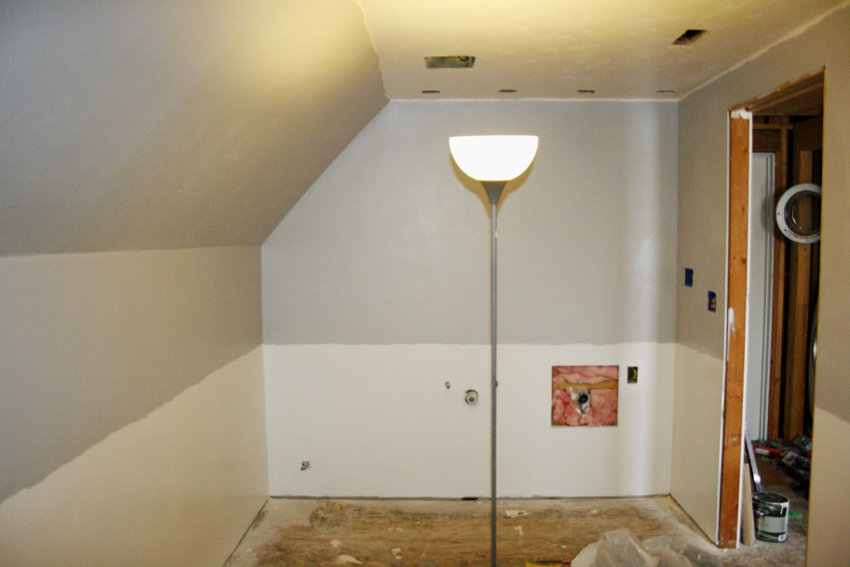 I wanted to be happy after I finally got to paint.  That is my favorite part.  I should have been thrilled.  But all I could think about was how much work there was left. 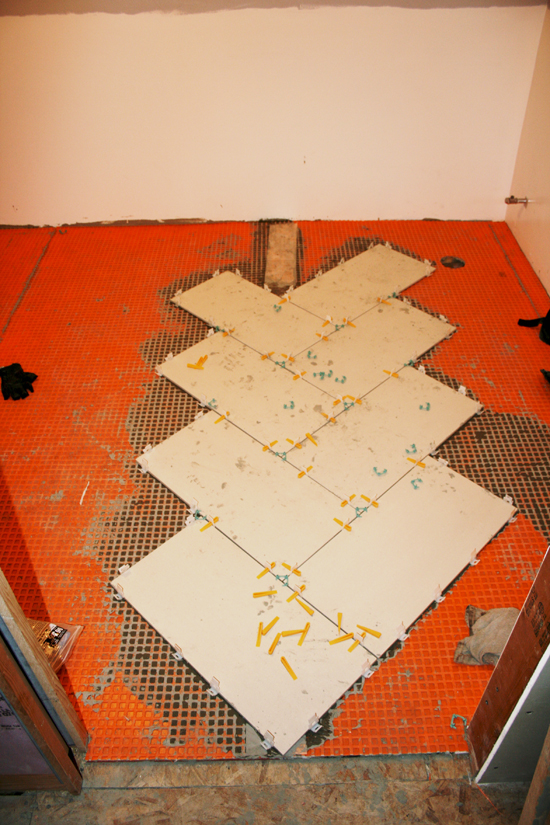 When we decided to do the Herringbone pattern DIAGONALLY I said to Richard "Will we regret this?"  And he brushed it off saying "What haven't we regretted about this project so far?"  I laughed.  Ha ha!  Good Point!

I thought big tiles would go in faster.  But they don't.  They are big and hard to manage and heavy and immature and unwieldy!  And that Herringbone pattern was tricky.  And doing it on the diagonal was insane.  I wanted to come up with tips and tricks to make tiling easier for any of you who feel inspired to follow my example, but the only advice I have is DON'T.  Just don't tile at all if you can help it.  It was hard.  And it took FOREVER. 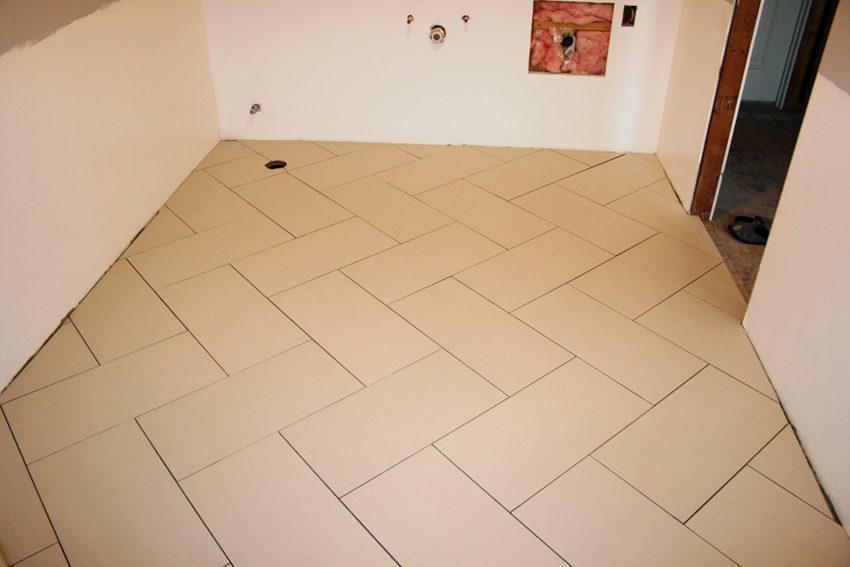 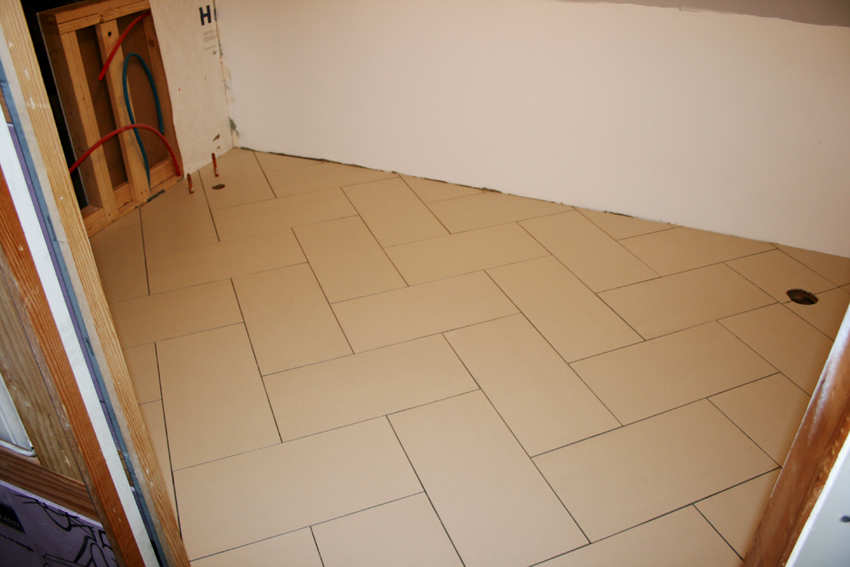 I really am happy with how it turned out but it was about 24 hours of tiling labor altogether.  24 hours.  I worked 12 straight hours one day, stopping at about midnight because I ran out of tile.  I ordered another box and when that came in I went at it again and finally finished about 1:30 am.    And it certainly isn't perfect, but considering how much trouble it was giving me, I'm really pleased it came out as well as it did.   I am so glad the tiling is done but can we put the toilet in yet? NO.  There is still more to do.  It is official.  Bathrooms are the worst.

I decided, back when I still had energy, that I wanted to stencil the walls.

Here is how the bathroom looks today: 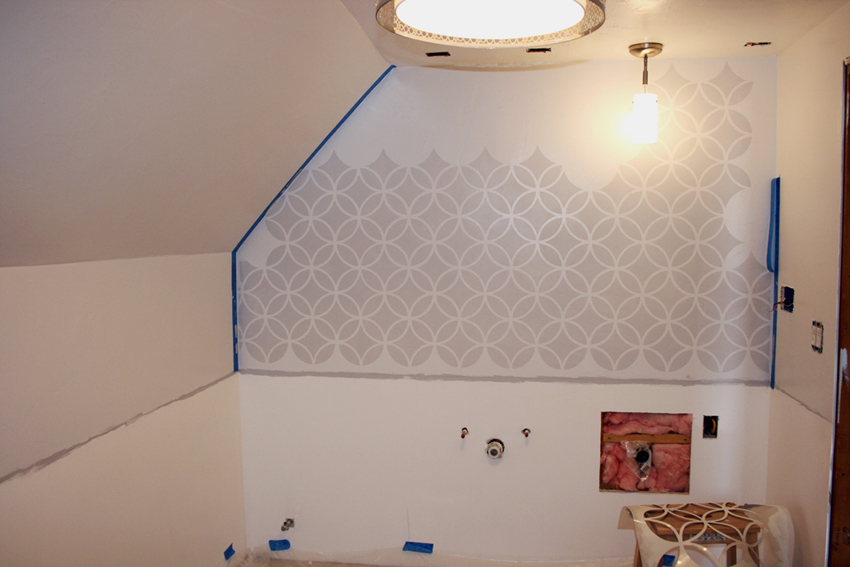 Well, no.  Technically, THIS is how the bathroom looks today. 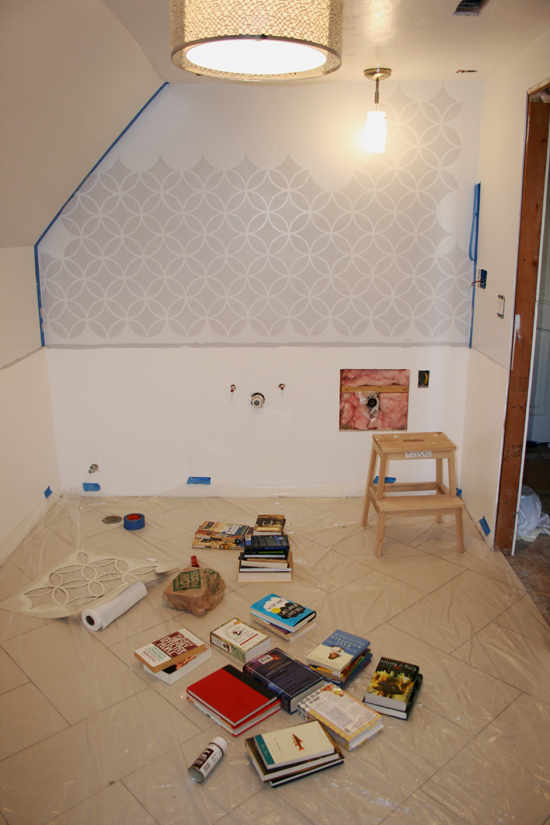 But don't ask me about the books.  I don't want to talk about it.

And I'm stuck.  My favorite bathrooms all have patterned walls.  We picked the colors and I painted the base coat and then put one piece of stencil up and Richard said "No.  Strike that.  Reverse it."  I had to agree with him, so I bought more paint and repainted all the gray walls a lighter gray, with a plan to put the darker gray on top.  But I started thinking the dark gray would be too dark and I didn't want the color contrast in the design to be too severe, so I lightened up the gray and that is how it turned out.

I DO like it.  And if it was easy I'd be like "Boo Yah!" (which I can totally pull off) but I'm not completely in love with it.  And for how time consuming it is, and for how crazy impossible it is to get into the corners, I'd really like to love it.

So that is where we are now.  I really don't know what to do.  What is it I don't love?  Richard thinks the pattern is too busy, and he thinks a darker gray WOULD look better.  Maybe he is right?  I don't know.  We looked at wallpaper, but didn't find anything, and looked at some more stencils online and found some we liked, but will we like it when it is done?  I don't know!  It actually looks quite nice in the picture.  Maybe I am stressing myself out for nothing?

So what do you think?  Should I keep going with this stencil?  Should I repaint and start over?  Should I give up?  Should I light the house on fire like I want to?  What would you do?   I should point out, after you give me your heartfelt opinion and advice, that I probably won't listen to it.  Please give it to me, just don't be hurt when I completely ignore it, which I will.

Ah bathroom, my old foe, will we ever be friends?