Today I went grocery shopping.  I do that sometimes.  And today I figured we would get some icecream cones while we were there, to make a party out of it.  Icecream can do that.  So I got a tiny little baby cone for Colin, and a slightly bigger cone for Harrison and a monstrously huge one for myself, but Harrison-the-weirdo said that he wanted the little tiny baby one.  So I gave it to him and the bigger one to Colin and on we shopped.   And because of all that, Harrison and I had long since finished our cones when Colin was still sucking on his and it was oozing all over him and he started mostly just sticking his fingers in it so I TOOK CHARGE! and filched that dirty cone and reassigned it into the depths of the nearest garbage can.  Success!

But he was super mad at me.  Not screaming at the top of his lungs mad, more like taking it out on his surroundings mad.  He squealed and hit his brother with his tiny hands and smacked the cart and tried to smash the groceries.  It is sad when your fury makes other people laugh.  Cuz that is what I did.  But it did get pretty annoying and he was NOT getting over it, so I found some potato mashers for both the boys to play with.  Soon, though, Colin was only happy if he was holding BOTH of them, and Harrison finally gave his to Colin just to shut him up.  I thought that was pretty nice, so we made a little stop in the toy aisle so that he could play for a while.  And I found a few goodies.  No, wait, that wasn't said with the right amount of enthusiasm.  Let me try again:
I FOUND A FEW GOODIES!!!!

There.  Now I've captured my emotion.

I took a few pictures, because those toys are just funny. 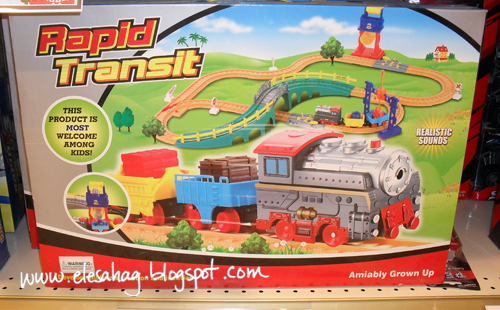 Sure looks like a fun train set!  Please box, tell us more!! 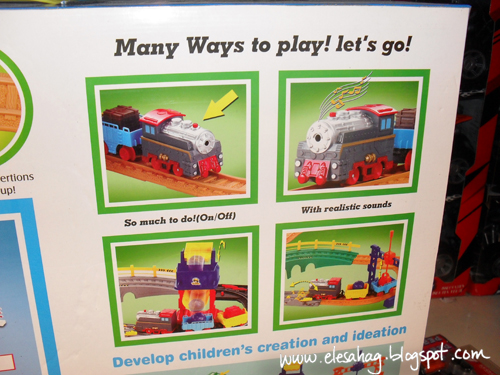 Whew, I don't know about you, but On and Off are just about more than I can handle.  This toy might not be appropriate for children under 13.  Use Caution. 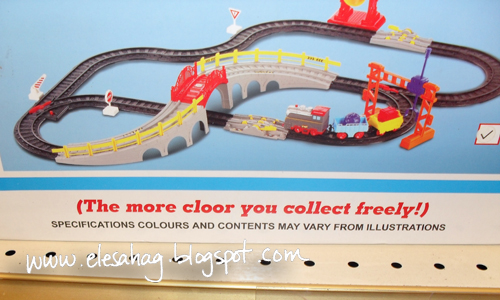 Translation: The chemical composition of the plastic may cause you to break out in Cloor* Boils, (a painless side effect of all the ideation and fun!)

Aand THIS version is cool, 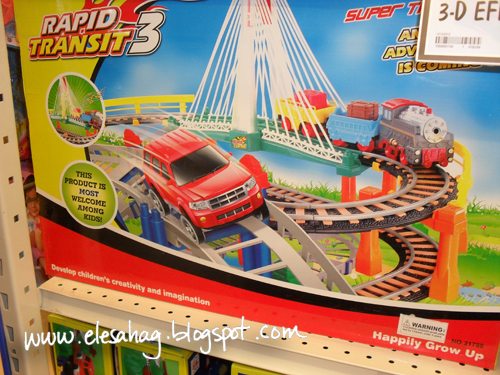 cuz I'd rather be happy than amiable, it comes with a car, AND it does this: 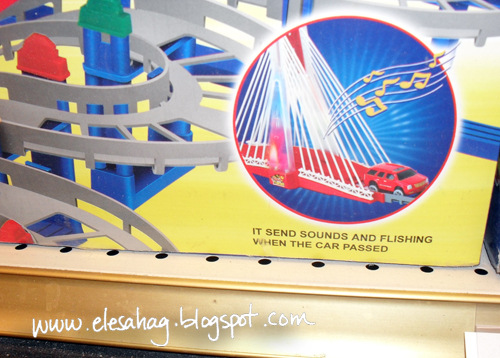 Boy, I know I've passed a few "sounds and flishing" in my time, if ya know what I mean.  But never in public.  I AM a lady.  Even when I am giggling uncontrollably in the grocery store.  Decorum, always decorum.  That is why my children are so well behaved.

*a rare strain of the bubonic plague.
Labels: Translations & Interpretations