I do not have a cat.  I do not want a cat.   Not that I have anything against cats.  My problem is with pets.  I don't want one.  And I wish the cat mafia would stop trying to give me one.

A couple months ago someone left a kitten, complete with litter and food in the back of my husbands truck one night.  Who DOES something like that?  If I wanted a cat, I would have one.  I don't want one forced on me by someone who doesn't have the nerve to take responsiblity for it.  The kitten stayed with us for about a week until we found somewhere else for it to go.   Harrison LOVED it and followed it everywhere but it frustrated him to no end because he just wanted to play with it, and kittens aren't puppies.  I don't know if you knew that.

So we got rid of the cat and told Harrison it went home.  He was sad but mostly got over it, though he still talked about it whenever he saw a cat.

B) Our backyard always has its fair share of cats.  I don't know if they are strays or belong to the neighbors and just like to hang out in our yard cuz the hunting is so good.  Either way I usually just ignore them, and they run away from me.  But in the last few days one of them has gotten increasingly friendly, until one night I came home to find him sitting on the door mat.  Harrison got all excited and said "My Cat!  My cat came home!"   which made me feel very sad.

If I go outside that cat starts rubbing against my legs like it is in love with me and it spent all night pacing back and forth outside the back door.  Scratching and trying to get in.  Where does it think it is?  Does it know that it doesn't live here? 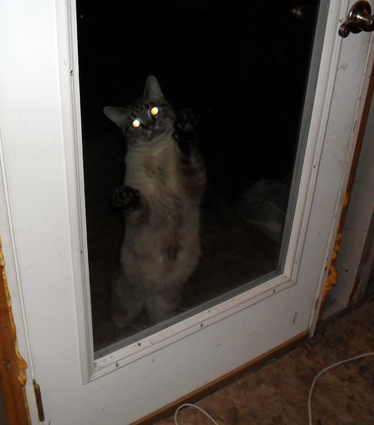 I think the Feline underground has had some wires crossed somewhere along the lines.  Cuz when they are leaving their little hobo-cat markings on the fence posts, the ones outside our house seem to be saying "This is a good place to get food."   And it's not true!  Just ask my husband.

Now, 5 days later, the cat is STILL sitting on the back porch.  Sometimes he paces back and forth in a frenzy, but mostly he just sits there, unmoving.  Watching me with those wide, staring eyes. That seem to be saying "Wait till Martin comes." 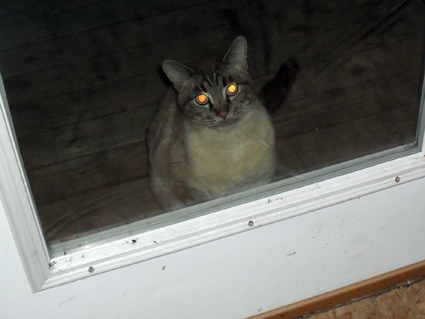