I want to thank you all for your helpful words of wisdom and advice in regards to my baby problems. I can proudly say that I tried every one of your suggestions, and it turns out that a careful balance of all of them works the best. I can't tell you exactly how to balance sucker-punching with lying next to them in their crib. That is something each parent has to work out on their own. I can only say that things are improving around our house.

And now Harrison won't stop eating. He has always been little. Well, he was average when he was born, but quickly dropped to "TINY" and hasn't been above 10% on the size charts for his age since. (Though one time, at a Bridal Fair I think, a lady said to me "How old is he?" and I said "He's about 9 months", and she said "Wow! He is SO big!" I just stared at her. Didn't really know how to say "No he's not ya loony!" so I just smiled indulgently and left her to her delusions.) I've always thought that part of that has to do with his eating habits. He just never ate much except milk and was short and skinny because of it.

So now that I have weaned him, he eats all the time. Half an hour is about all it takes for him to digest and he is ready for more. I don't even know how to keep up with him. Thank goodness for goldfish and cheerios, cuz it's not like I am going to cook 10 meals a day. Come on. That is just totally unrealistic. I feel pretty good about cooking one, and I would really like to keep it that way.

So anyway, I keep expecting him to suddenly get fat. Just blow up like Harry Potter's Aunt Marge. 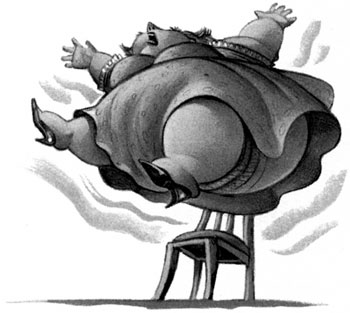 Of course that would really be quite unfortunate, but I always think about it anyway.

Still, 2 weeks of eating like a pig, and I don't think he has gained a pound. I would blame it on the running around, which he does, but he is really more of a explorer than a marathon runner. I am starting to think that mess making might actually burn more calories than anyone has ever suspected.
Labels: Family