If Arnold Schwarzenegger Can Do It, Why Can't I?

The Challenge was to go to your picture folder on your computer. Find the 6th folder. (If you are having a hard time locating it, remember, look AFTER number 5.) Go to the 6th picture of the 6th folder. Post the picture on your blog and describe it. So here it is: 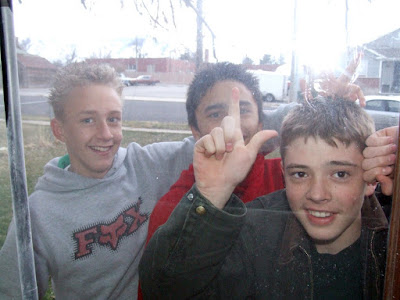 Hmm. It feels a little weird to post this picture. This is 3 boys from my ward, taken about 3 years ago. Is it wrong to publish this picture online? If anyone thinks online is over the line, please let me know.

So, why do I have a picture of three 14 year old boys? In case you can't tell, this picture is taken through a window. From the inside. So, yes, they were standing on a couple of cinder blocks in the middle of my flower garden, staring through the window. My husband had recently been put in the Young Mens, and I in the Young Womens, and for months these three rode their bikes to our house after school with the sole purpose, as far as I can tell, of annoying us. That is, afterall, what 14 year old boys do best.

We invited them in from time to time, but they were always trying to steal Richard's fireworks, and they really seemed to prefer staying outside anyway, finding new ways to drive us crazy. I took this picture so that I would have some proof of their weirdness.

Not to worry though! I got a little bit of payback. One day they leaned Richard's bike up against the house so they could stand on it and look through the kitchen window. And they just stayed there. Richard went out and invited them in, but they preferred to be as creepy as possible and stand there with their faces pressed against the glass. It is pretty hard to just carry on with your day knowing that you are being watched. I certainly couldn't finish washing the dishes. (Ha ha! Yeah Right! I wasn't washing dishes!!) So I snuck upstairs to my bedroom, quietly opened the window in my closet and climbed out onto the kitchen roof. Then, with the stealth of a ninja, I inched my way carefully toward the edge. There they were, as clueless as could be. So I pulled out Richard's airsoft gun and shot them in the head!!

They looked up, screamed like little girls, and ran. Ha ha! It was awesome! I felt so cool, like Arnold Schwarzenegger in Commando. 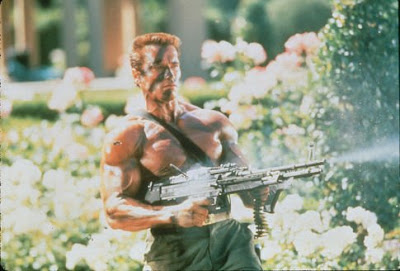 Except, you know, with a shirt on.

After the shooting and the running, they scattered around my back yard, hiding in the trees. Richard distracted them by firing off some more shots from the kitchen door, to be sure they stayed where they were, and I ran out the front door, loaded all of their bikes into the back of our truck and drove away. HA! Take that, suckas!!

Needless to say, they liked getting shot at and it didn't help at all, but it was not without its lessons. I learned, for instance, that shooting people from my roof is super, super fun and I should find ways to do it whenever I can! Hooray!