CUPS (like "COPS", but without the cool theme song)

When we were kids, one of the things that made my dad crazy was half drunk cups of milk left sitting around the house. (You know, like the little girl in "Signs" who left cups of water all over the place. Only we left ours around more out of lazy forgetfulness than neurotic obsessions, and ours never saved us from an alien attack.) It made him furious. Now that I'm a mom, I'm pretty sure it would make me mad too. But no matter how much my dad yelled, threatened, bribed or cajoled, we still always got more milk than we could drink, and would inevitably leave the leftovers sitting on top of the TV, or on the back of the toilet, or, my favorite, stuck back in the fridge - like we were really going to drink it later.

So in an effort to save my dad's sanity a New Cup Order was introduced. All the existing cups were replaced with smaller cups. This way it was almost impossible to get more milk than you could drink in one sitting. It was also almost impossible to get as much milk as you wanted in one sitting as the cups were about the size of those used in the sacrament.

Things have been this way in my parents house for so long that I just didn't think about it until I got married. Course, Richard didn't say anything at first. It doesn't do to insult the cups of your in-laws right off the bat. But eventually it came out. The same way Richard doesn't like little spoons, he doesn't see the point of little cups. I remember him asking me once why all of my parents cups were so small. I said "I don't know. I guess they aren't very thirsty people."

My dad tried to satisfy Richard's needs for oversized dishes by finding him what was, admittedly, a pretty big cup. Richard appreciated that, but apparently it wasn't big enough. So Richard found some HUGE 64 ounce red plastic bucket somewhere and brought that to my parents house. It is stored in a special place so that he will always be able to use it whenever we come over. So Sunday we sit around the table, all of us drinking out of thimbles while Richard drinks from his giant tub. It is a funny sight, and I think it makes Richard happy. 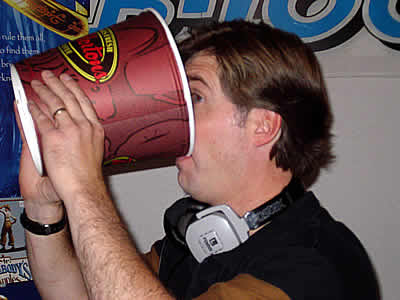 This isn't Richard, but it IS a big cup. If Richard sees this picture, he is going to want one.
Labels: Thoughts