How To Turn Weeds into Lawn in just 99 Easy Steps

1. Get rid of your old Septic Tank.

Think you don't have a Septic Tank? Well, maybe you don't. Maybe what you have is just a ghetto cavity deep in the ground that your toilet waste has been pumped into for the last 15 years. I don't know. Your sewer set up is really none of my business.
Wanna see a picture of OUR hole in the ground? 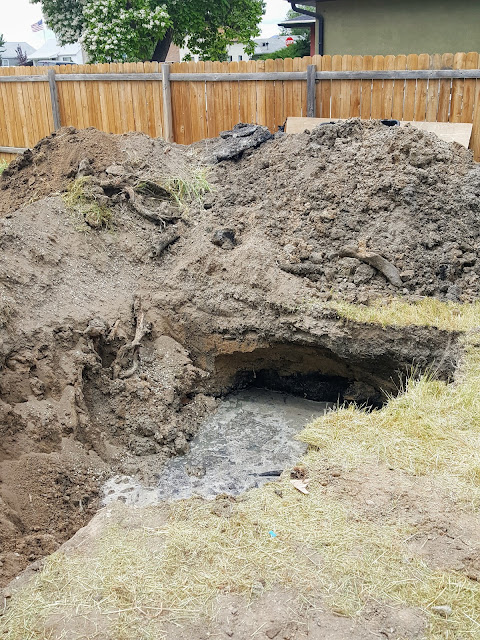 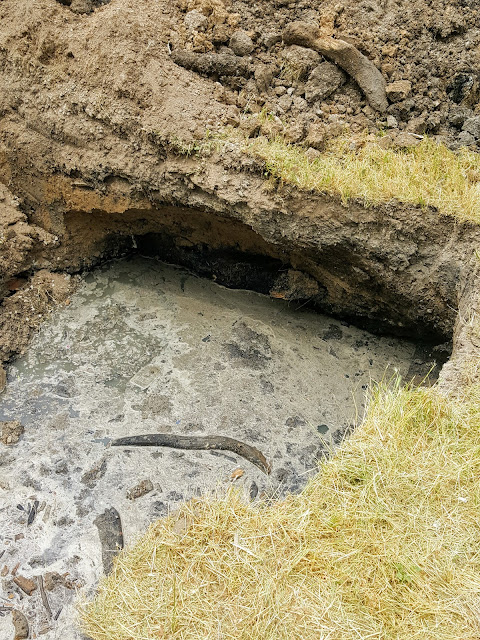 Those are actual wooden logs floating in it, FYI. We used a backhoe to dig it up. When we cracked through the slab of asphalt with that was laying across the top, the smell slammed into us like a stinky slap in the face, but after a bit it wasn't so bad. Probably because the smell floated into all our neighbor's yards. It's fun to live in our neighborhood.
Anyway, get that sucker pumped out and filled in and move on with your life as quickly as possible. Then you'll be ready to get to the actual yard work.

2. Chop Down Some Trees.

I mean, you don't have to. But if you are going to chop down any trees, NOW really is the time to do it. You don't want to tear up your pretty new grass during the massacre. This big ol' tree in front of our house was really close to the foundation. It also grew directly over the gas line. And, like half of the trees on our lot, it was growing into the power lines, so every couple of years the city came and hacked the top off. With so many strikes against it, we decided maybe it was time for this tree to move on. Good thing we still had the Manlift! 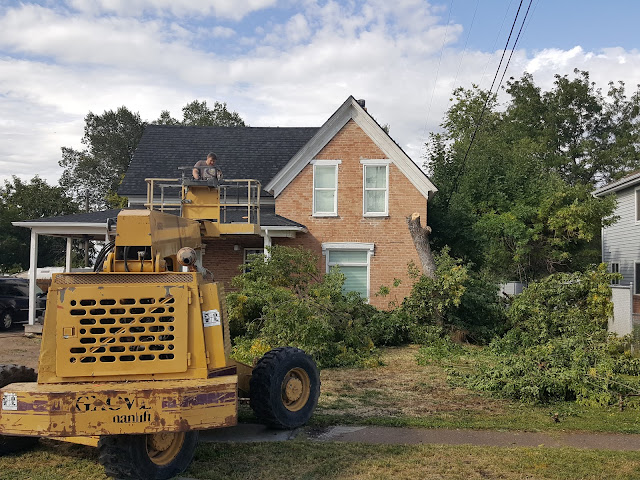 It started raining on us but I bribed Colin's friends with plates of cookies if they would help us drag all the branches into the backyard and we managed to get most everything cleared up. 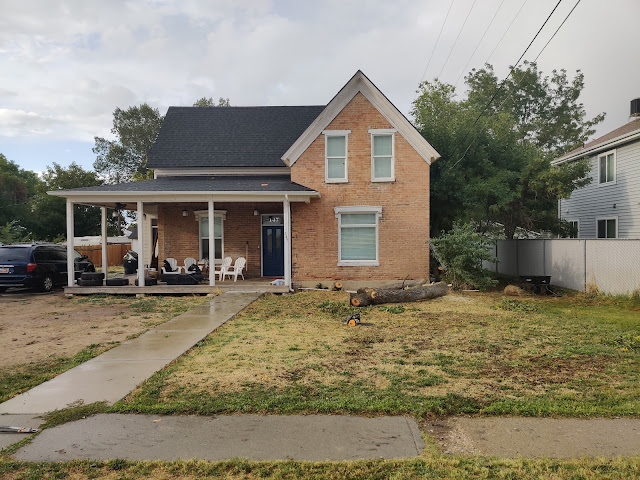 Right next to that tree there was a plum tree and a snowball bush that we tried to save, but in the end, they didn't make it.

2. Remove all the Weeds.

First I used Vinegar to kill my weeds, cuz I had read somewhere that it was the best thing to do. It killed a few weeds, but apparently vinegar doesn't kill the roots, so it really doesn't get you much in the long run. So next I used a deadly weed killer and sprayed the heck out of my weeds. A few of them died, but I think my weeds are some kind of super strain, because mostly they just mocked me. I finally gave up and had the front lawn tilled. I found some guy on KSL who was just trying to make enough money to justify the tiller he had bought. 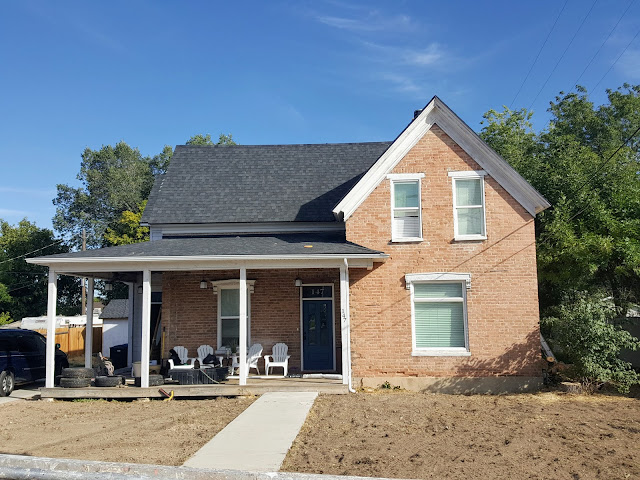 2. Remove all the rocks.

There is no picture for this, but I think you get the gyst.

3. Remove all the rocks.

4. Remove all the rocks.

Nope, you still missed some more.

5. Plan out your sprinkler system!

For this, we used Richard's brother, who planned out the whole system for us. If you don't have a brother-in-law with sprinkler skills, I think Sprinkler World will also work up sprinkler plans for you if you buy your parts from them. 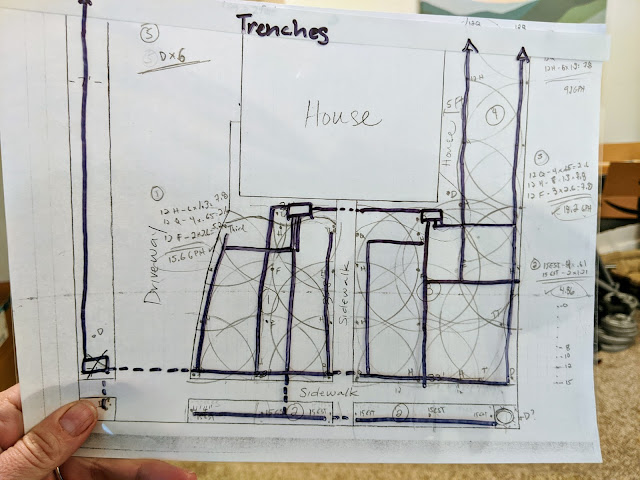 We rented this bad boy. 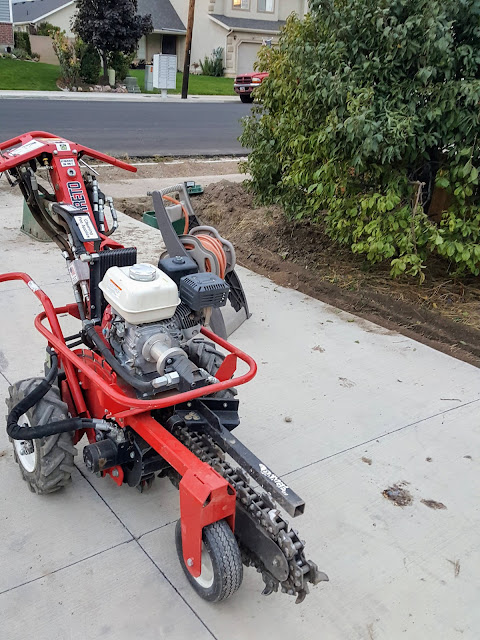 It made the work easier, but it was still exhausting. And because of poor planning, there were still a couple of trenches we had to dig by hand. I swear, digging will be the death of me. 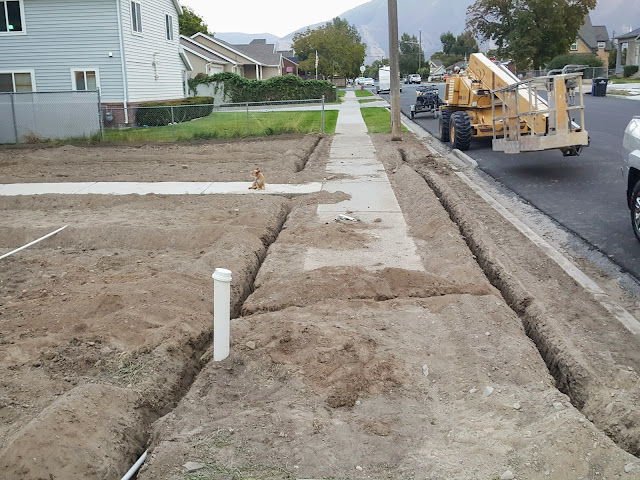 I know you think you already did this, but apparently you didn't, because there are still SO MANY. Good luck finding somewhere to put them.

Use your brother-in-law for this too, if you can trick him into it. 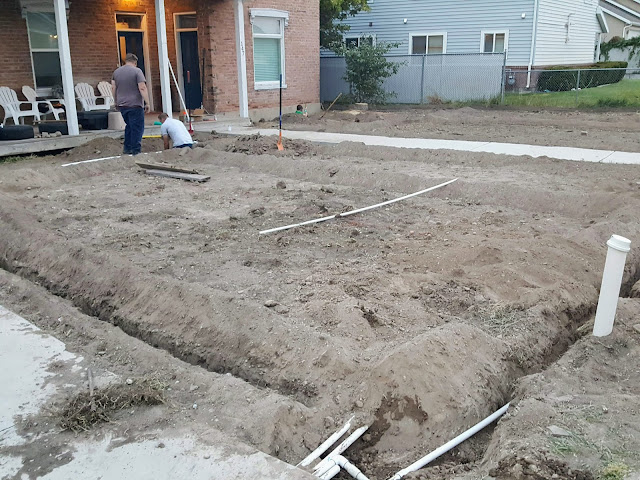 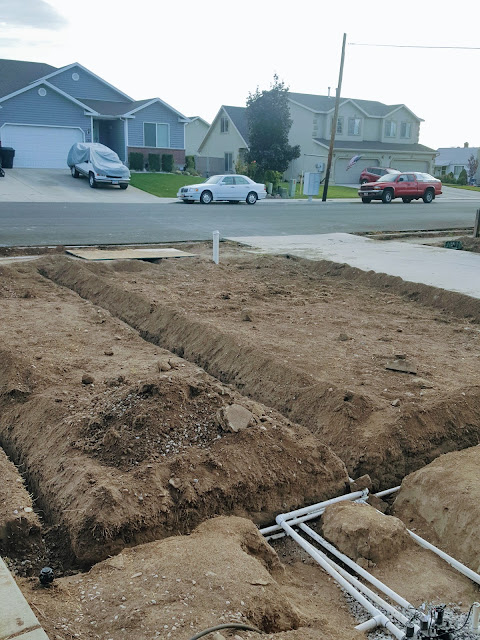 11. Bake your brother-in-law a cake. Or cookies. Or maybe a pie. Or he might never talk to you again.
12. Fill in your trenches and rake everything smooth again.
13. Remove all rocks. You are really bad at this. That's why you have to keep doing it over and over.
14. Wait all winter long because someone at the hydroseed place told you didn't need to call to get on the schedule until October 10th or so, but when you call on the 10th you find out that they stopped spraying hydroseed on October 1st. Try not to be too bitter about this. But pick a different company to use when its time.
15. It is Spring! Time to kill the weeds again! Good luck! They are even more resistant to weed killer than they were last year!
16. Remember just in the nick of time that you also need to get rid of the stump leftover from the tree you cut down last fall. Pay a tree service to grind it out for you because you've learned the hard way that removing stumps yourself is virtually impossible.
16. Rake the soil smooth again.
17. Remove all the rocks. It is possible that someone is sneaking the rocks back into the soil when you are not around. 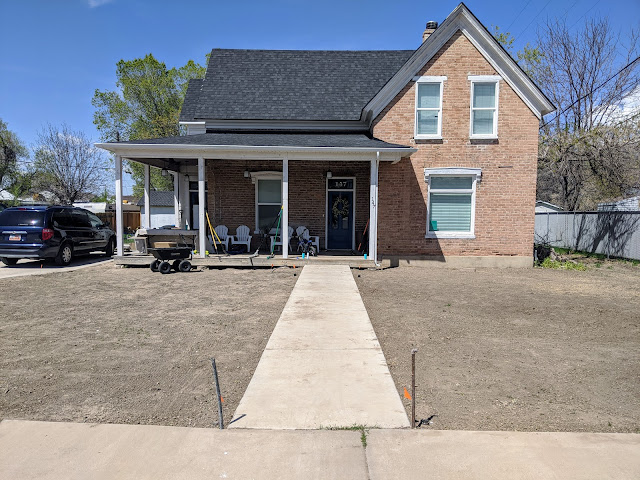 We had our topsoil delivered from Topsoil.Rocks. That is the name of the company. https://topsoil.rocks/wp-content/cache/all/index.html The price was good and the delivery was free and they left us with a big pile of dirt in the road. Good times. 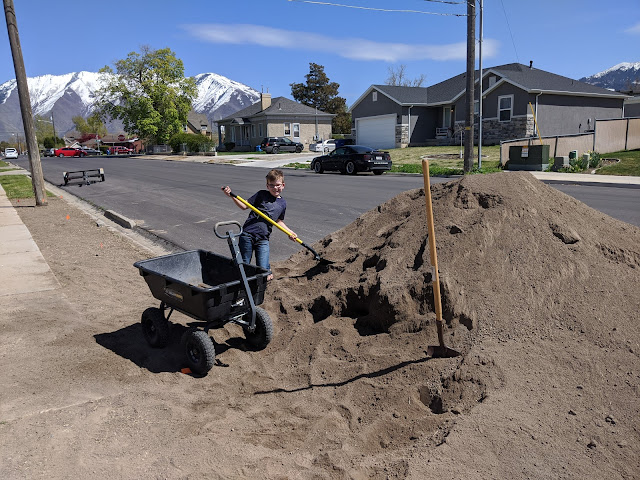 I spent ALL DAY with my boys shoveling dirt into the wheelbarrow (wheel barrel? I don't know what it is called! I could look it up but I don't care!) and dumping it in piles around the lawn. I made it about a 3rd a way through the pile. So the next day we rented a machine to help us because we wanted to not spend the rest of our lives shoveling dirt. 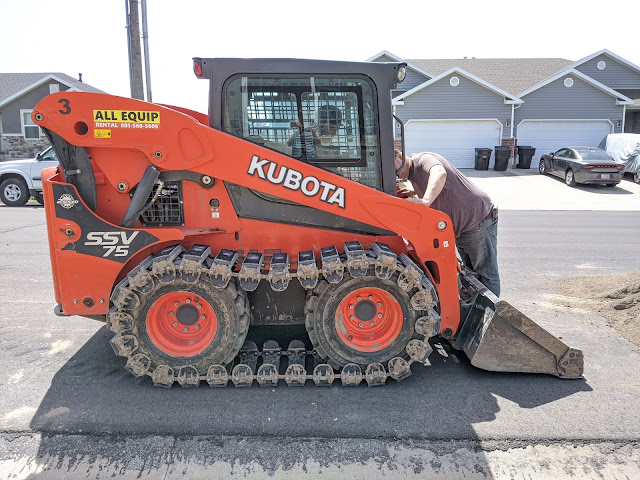 We wanted to rent a bobcat, but that big thing was the only one we could find on a Saturday. Those stupid tracks tore the crap out of everything. We tried to fill in some holes in the backyard, and it is now a total disaster. 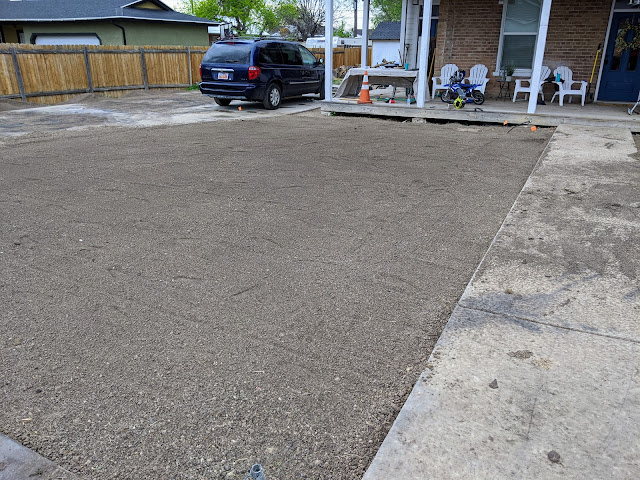 Actually, maybe I should swap these. Do some research. I don't know if it is how all concrete curbing is done, but the guy who put ours in made the curbing really tall. He told me specifically that the curbing should go in after the top soil, but I really wished we had put the curbing in first. So, I don't know. Educate yourself on the process more than I did and plan accordingly.
Curbing is sold with a minimum. The guy I used charges for at least 100 feet. Some people require you to pay for 150 feet. So we figure if we were paying for it anyway, we'd put in as much as we could. We were just going to section off space for flowers in front of the house, but we decided to extend it all the way around the side of the house while we were at it. It came out to 90 feet. 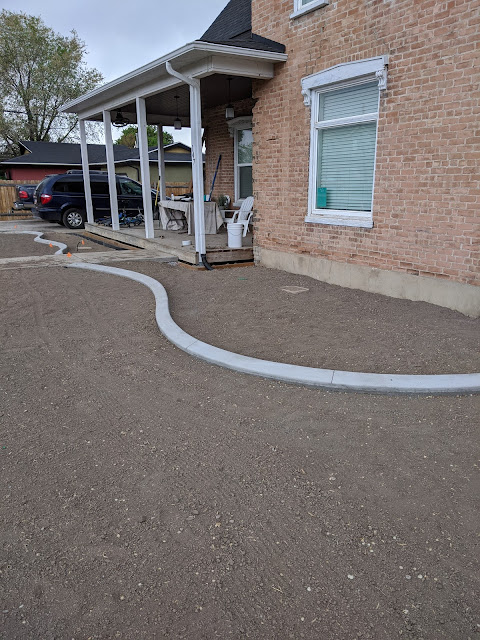 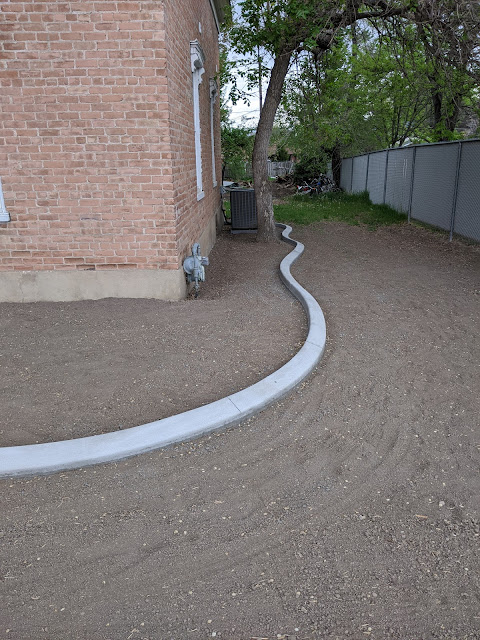 The lines looks so wiggly from a distance. I wanted them wavy. But do I like the way it turned out? I'm hoping once it is full of plants the wiggly lines won't be as noticeable.

48. Get angry at the weeds that think they own the place and dig them all out by hand.
49. Rake the yard smooth. Despair of ever getting it smooth.

Curse rocks to the deepest trenches of hell. Shake your fists at the sky as the rocks mock you, and recruit all their friends to help ruin your life. Refuse to give in. Never give up! Never Surrender! You will be victorious!

We chose Hydroseed primary because of cost. I think I got a quote for sod once. It was in the thousands. I don't remember. Lots of money. The cost for Hydroseed for the same area? $180.00. 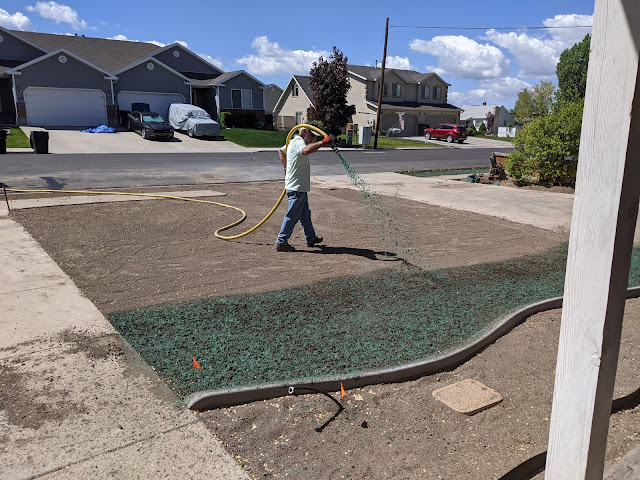 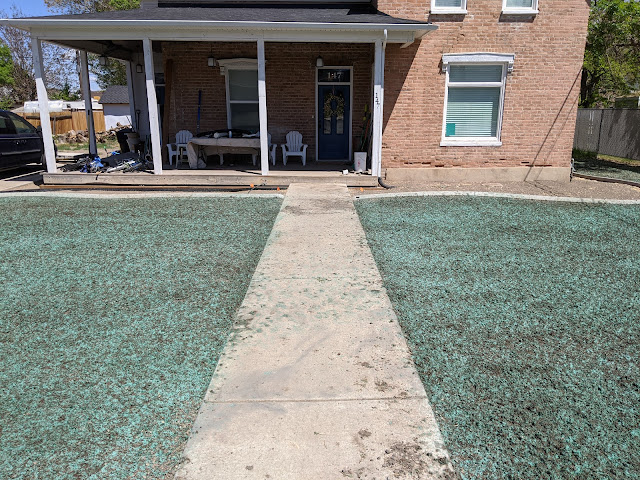 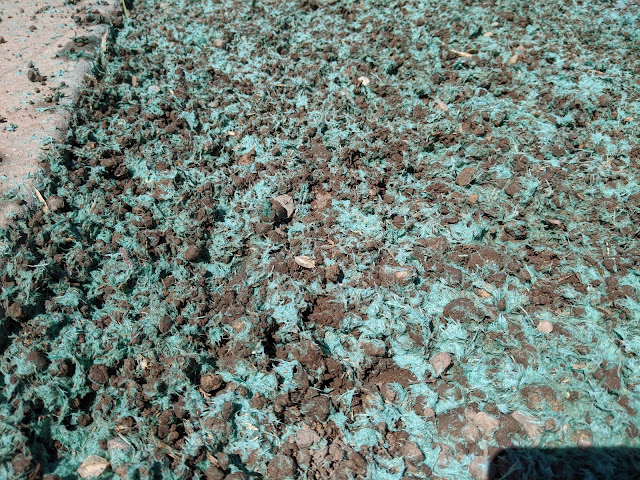 Rejoice in the grassy future that awaits you!
97. Cry into your pillow when the city shows up two days later to replace the sidewalk in front of your house, trampling the hydroseed all to heck. 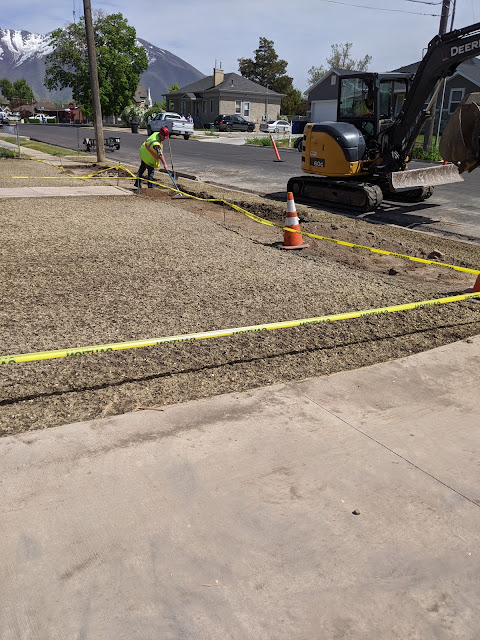 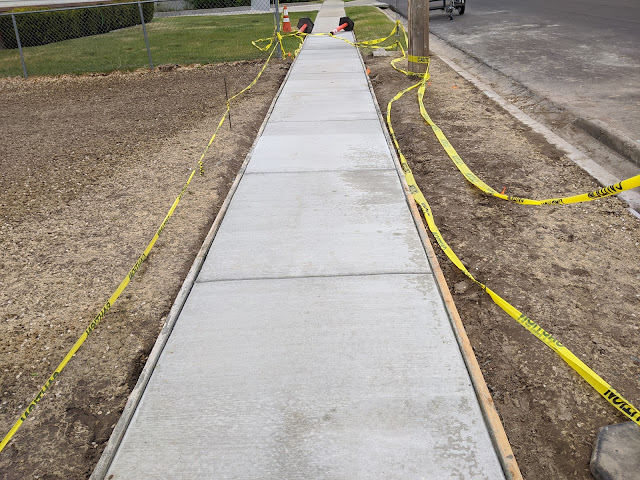 98. Sit Around and Watch the Grass Grow.

Hydroseed is cheap, but it comes at a cost. The first week especially we constantly worried that we were watering it either too much or not enough and had no idea if we were doing either one. But One Week later we had tiny blades of grass shooting out of the ground! 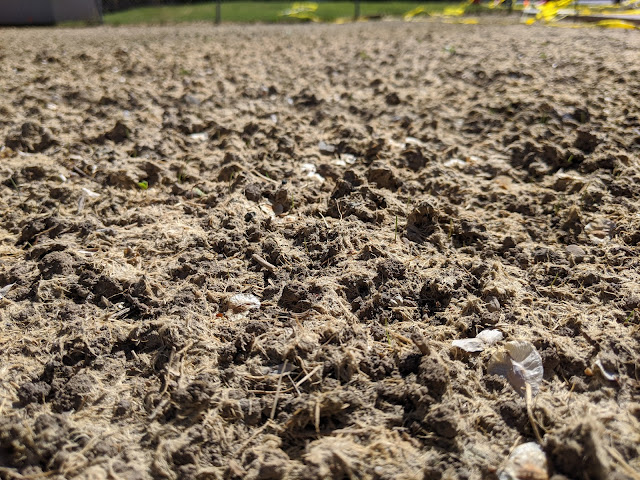 Look closely. They're there. 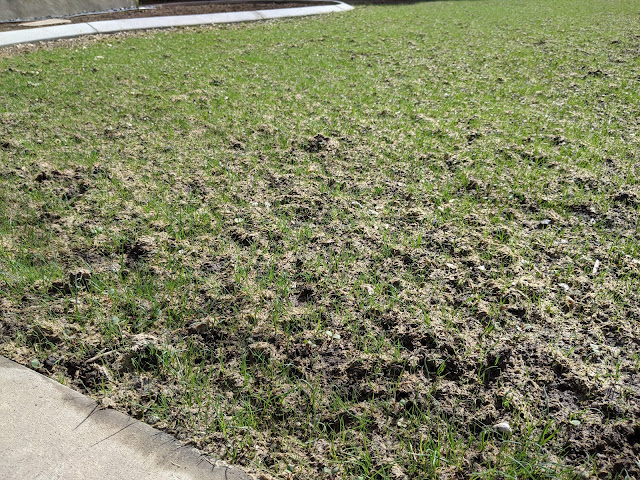 It looks like grass! It really does! And what the heck is that round thing pushing up out of the ground? 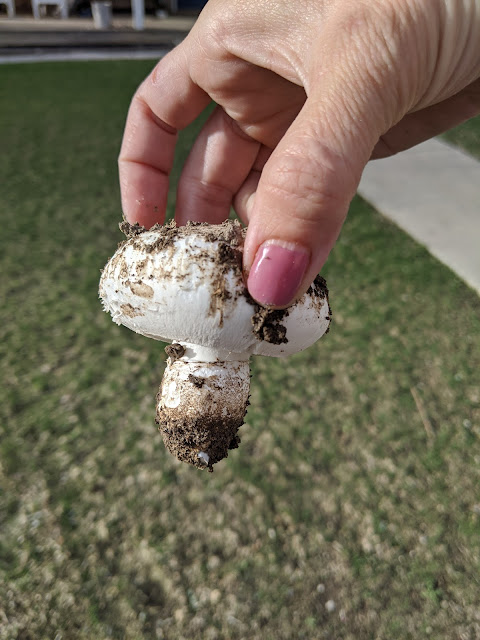 Why are you here, giant mushroom? 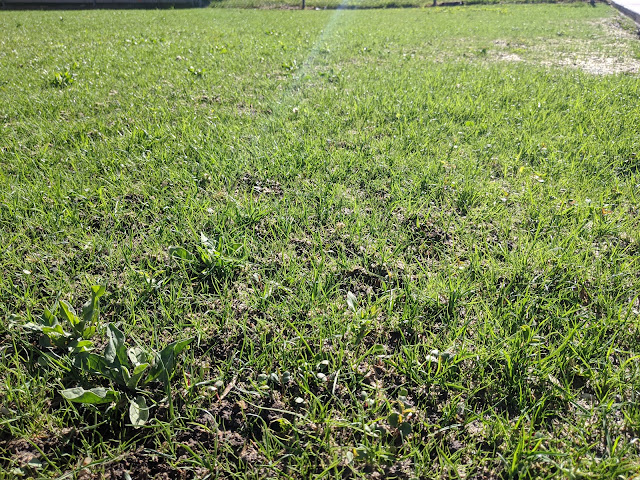 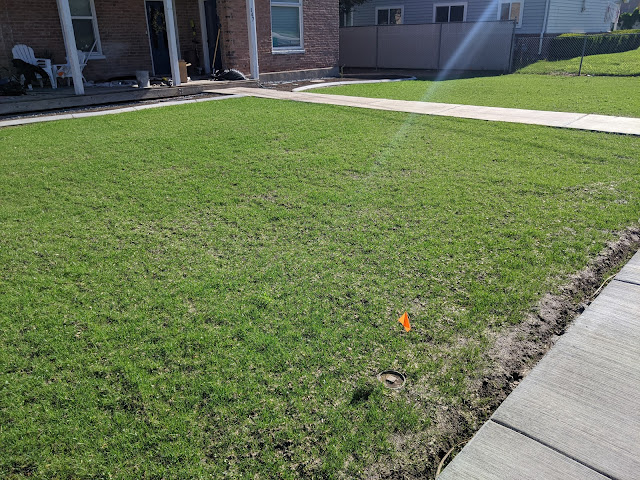 Hot dang, would you look at that? There have been several more mushrooms pushing up from the depths of the soil, but I eat mushrooms for breakfast, so they were no match for me.

During week three, we got to mow the lawn and put down fertilizer. Exciting times! 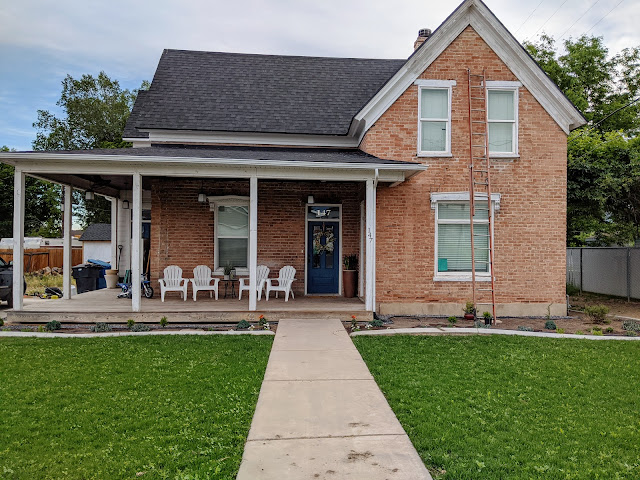 Folks, we have grass. We also have weeds. Lots of weeds. But enough time has passed that we can put down a broad leaf weed killer. And weeds are normal in the first year, but hopefully by next year the grass will be strong enough that it will choke out the weeds. You know what they say: The best defense for weeds is a healthy lawn.

So, that's about it. You too can have grass by following these simple steps.

Here is a fun before picture. This is from Google Street View right after we moved back in to our remodeled house. I especially like how cute and tiny the minivan looks in this picture.

And here is how it looks today! 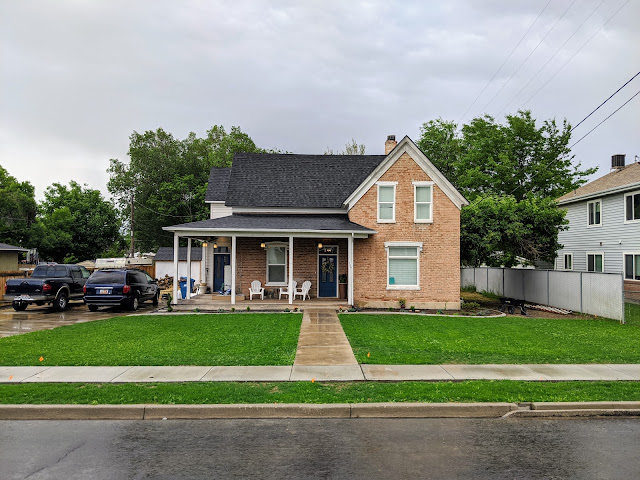 Here is the WAY BEFORE, just for reference: 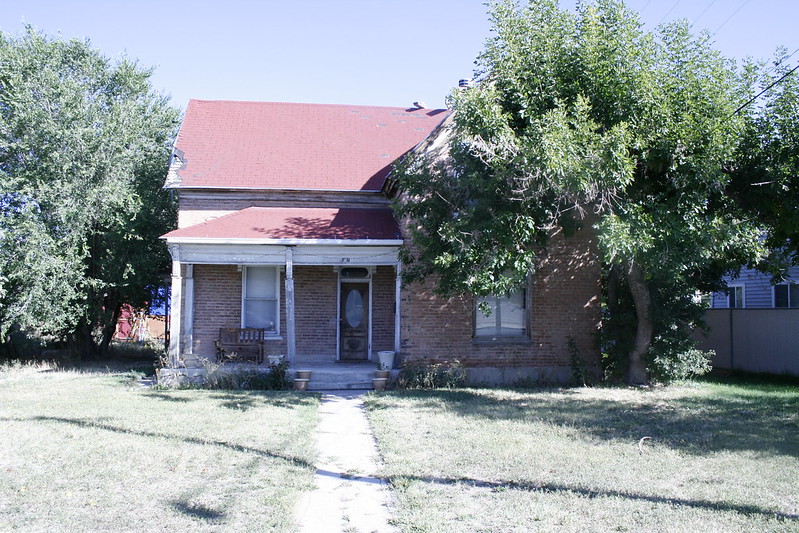