Travel Trailer Electrical, and Other Things That May Bore You

First, the other things. Remember this backsplash? 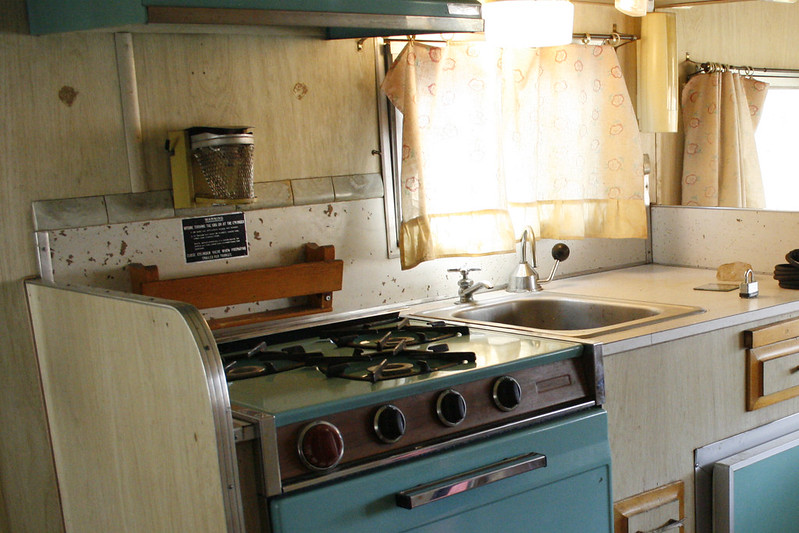 The countertop is a white laminate with gold flecks, but instead of carrying that up onto the walls for the backsplash, they used some kind of particle board with white paint on it. Or something. And then, they topped it off with what appeared to be plastic, marbled, bullnose tile. Of a sort. The picture doesn't really capture their beauty. Because they have none.

So I pried it all off!

The particle board came off easy. As the glue was no longer sticky at all. The plastic tiles were hollow, and filled with some kind of adhesive putty. It was committed to sticking to the wall. 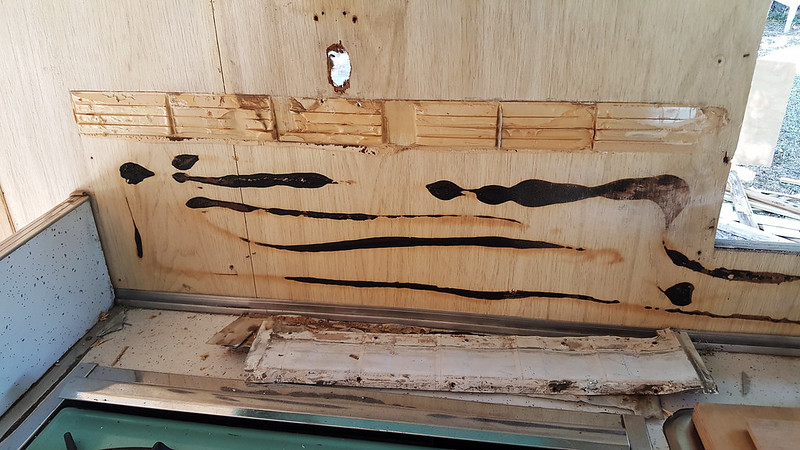 First I tried chipping away at it with a putty knife. Ha. It laughed in my face. Then I tried sanding it off. It completely ignored me. Then Richard told me to just go get a chisel, already. So I did. 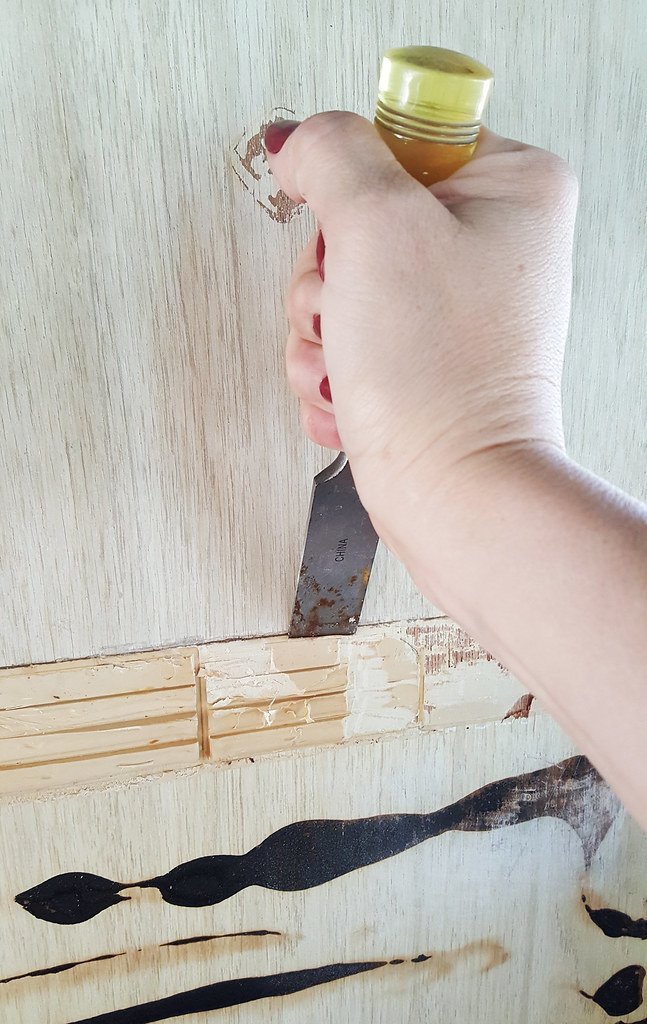 I started out hitting the chisel with a hammer, but I kept going too deep and taking bits of wall off with the putty. Eventually I figured out that it worked best if I just used the power of my hand, and pushed straight through the putty. It came off in a few sliced layers.

Anyway, a very rambly way to say I got all the crap off the wall. Yeah. Told you you'd be bored. 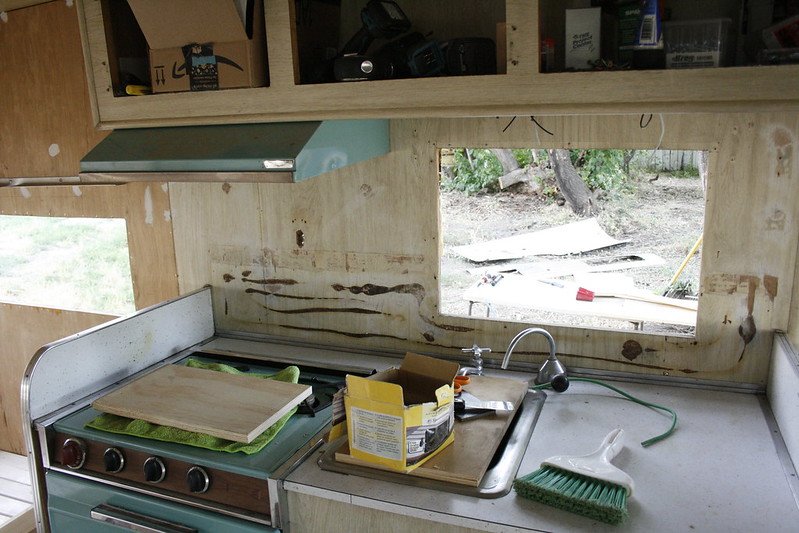 And then someone stole my camera! 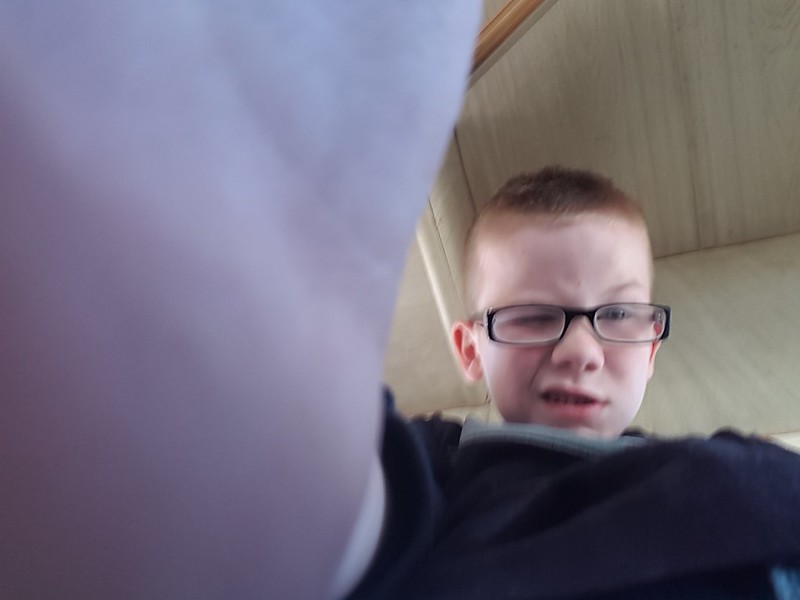 So, wiring. I can tell you what I know, which isn't much.

Since the siding is STILL off the trailer, it made it really easy to work on the wiring.

Here is how it works. (I think. I keep having to ask Richard how this works because it refuses to stay in my brain.)

A/C is the kind of power our houses run on. Current goes in both directions (i.e. Alternating Current.)
D/C is the power that comes from Batteries, which only supply current in one direction. (i.e. Direct Current). Honestly, I have no idea what that means. But if our Travel Trailer is wired for D/C, the stuff inside of it can run on batteries.

A car battery is 12 volts, and they make light fixtures and fans, etc. to run on 12 volts, since that is what RV's and boats use. So.

Originally our trailer had one D/C light in it. So if we were out in the middle of nowhere, running off a 12 volt battery, we would have one measly light. The rest of the lights required A/C, so to use those we'd have to be hooked up to A/C power, with an extension cord or whatever.

So we rewired all the lights to run off D/C.

This is where the original D/C light was. 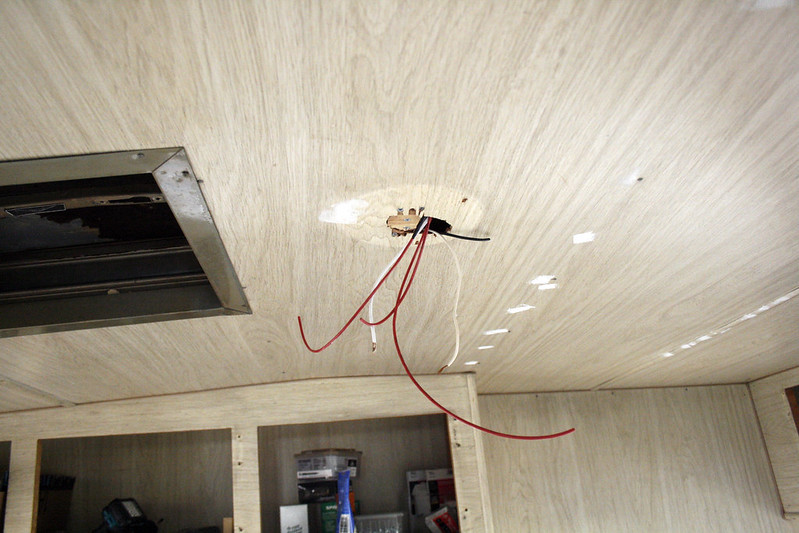 The black wire is power coming in, the white is the ground, and the red is running to other light fixtures and a light switch. These wires are all 14 gauge, so you can use all the different colors for whatever you want. This is just what worked for us.

We are adding another light about 3 feet to the left of this one. 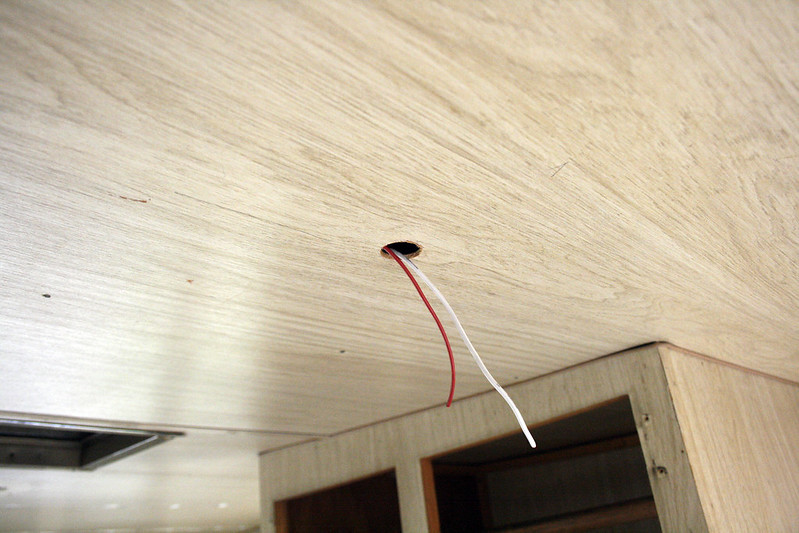 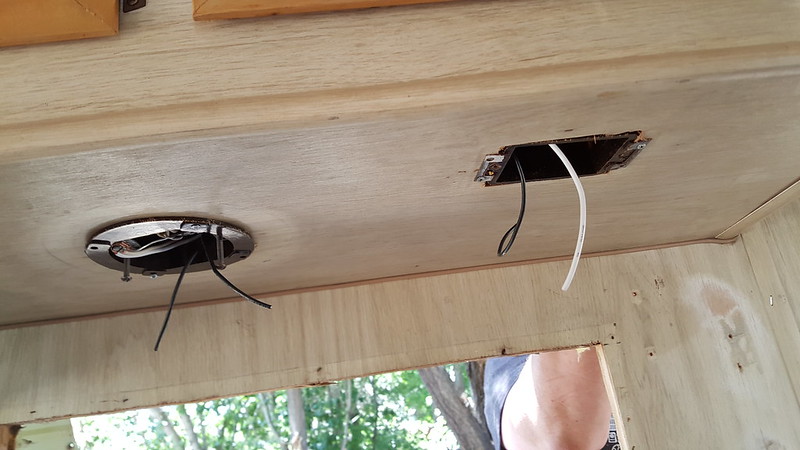 Above the sink was a light we rewired, and an outlet we re-purposed.  We're sticking a USB outlet in its place. I gotta admit. That gets me pretty excited. 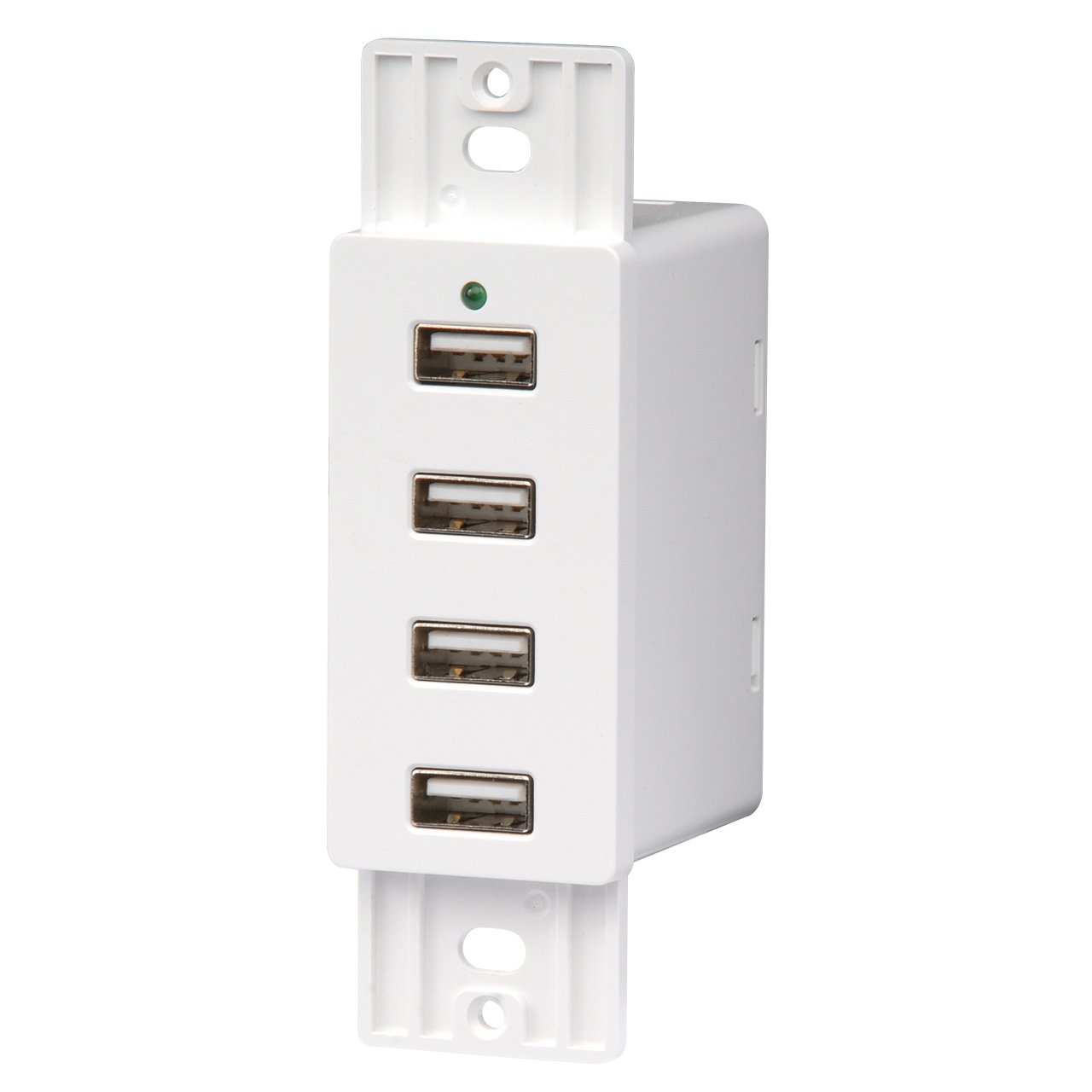 We got those on Amazon, but there are probably lots of similar options out there in the world. Accessing the wiring for those boxes is no problem. Just lift up the board in the cabinet above them: 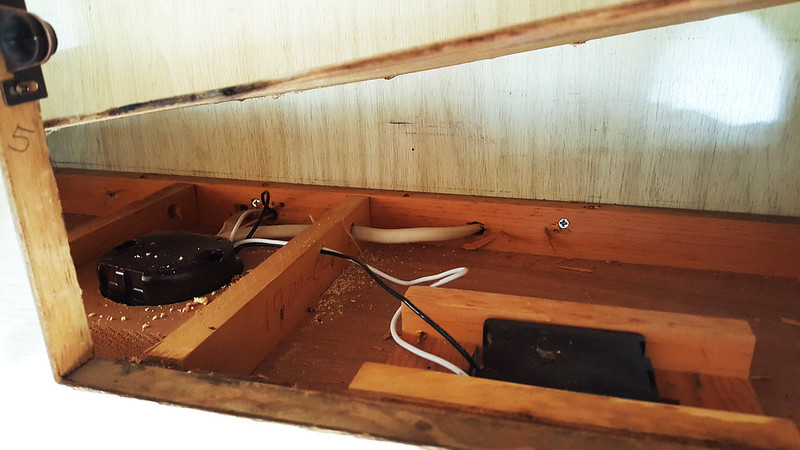 And there you are.

There is another light over the dinette and two sconces on the back wall above the bench. We're putting another USB charging outlet back there. I could include pictures, but I think you've got the gist. Colorful wires sticking out of holes. Good stuff.

Then Richard installed this fuse box. 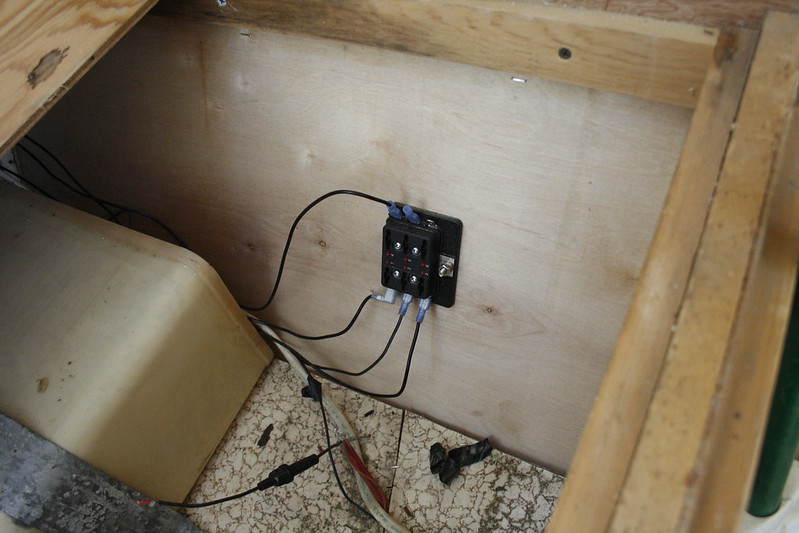 Which sits under one of the benches. It works like the fuse box in your car. I don't know how the one in my car works. But I do know that if the fuse blows, you replace it.  So all the interior lights, (and the fan we are going to install!) run into here. The Trailer's running lights--those on the outside that are on while you're driving--are hooked up directly to the car's power.


A few of the light fixtures we are using are specifically designed to run on 12 volts. But the 12 volt light fixture community doesn't have the biggest selection in the world. But don't despair! There are other options! You can also buy 12 volt LED light bulbs. 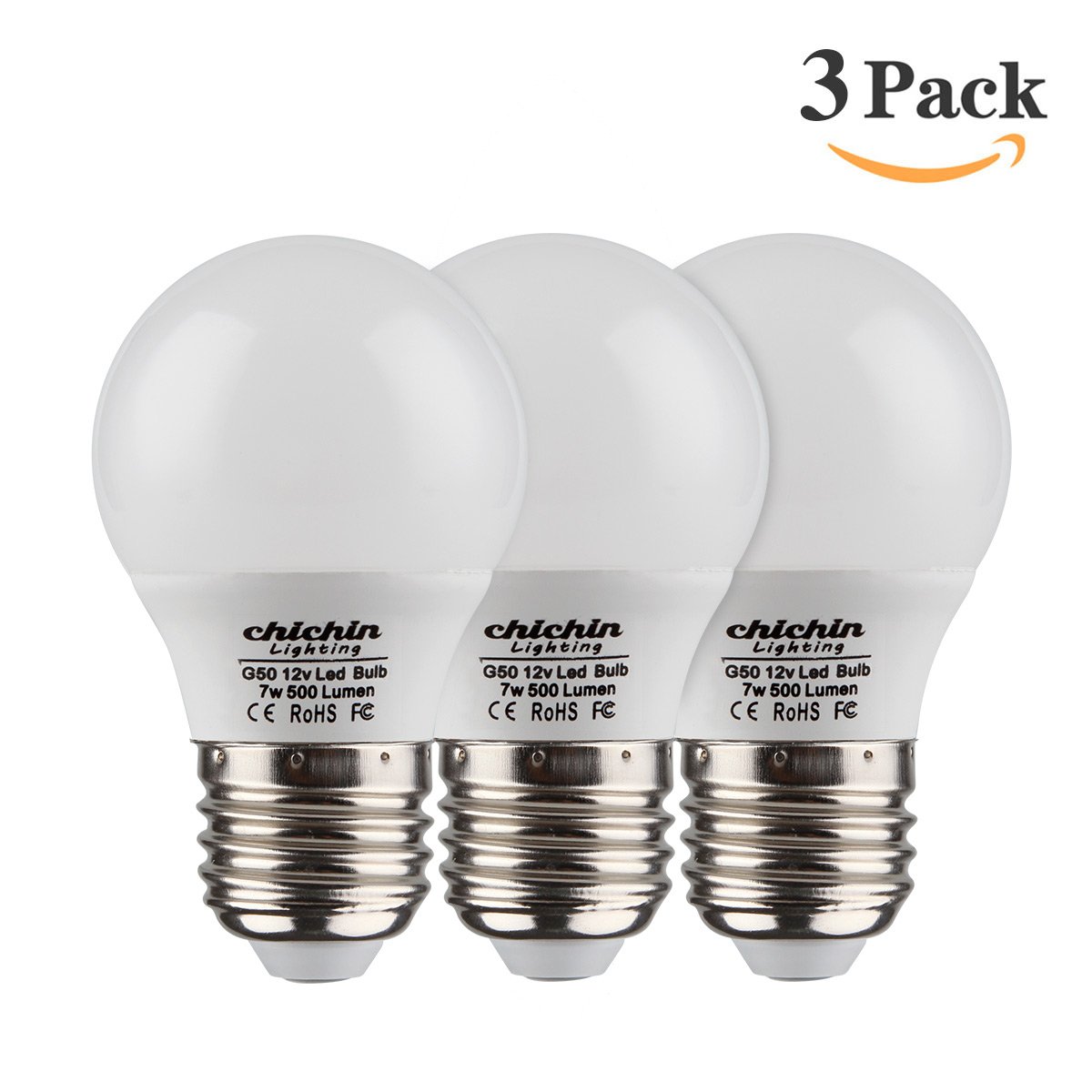 You can use these in a regular old light fixture and get the same effect as a 12 volt light fixture. Pretty cool, right? So that is what we are doing over the dinette.

Both batteries and light bulbs have improved a lot in the last 50 years.  Using his magical brain, Richard calculated
that even running all the lights in our Travel Trailer 24 hours a day, one 12 volt battery should still last us four and a half days.

So, yeah. Pretty awesome. And that is all I have for you to day. Tune it next time for whatever other drivel I throw at you! Good night!