Back in January we went on a vacation.  We were tired of being cold, so we planned to go to St. George, which was supposed to be like 3 degrees warmer than here.  We would be there 3 days, and two nights.

I told the boys to pack a bag, listing the things they would need:


Pretty straightforward. I also warned them that it would be cold and they needed to be prepared. They happily ran off to pack and proudly brought their bags back out to me in no time.  Before we left I went through their bags to make sure they had what they needed.  You know.  Just on the off chance that maybe they were missing something. Just in case.

The Contents of Harrison's Bag:
2 pair of socks, and several additional socks that had no mates.
2 pair of shorts
2 T-shirts, one of which belongs to Colin
1 pajama shirt, belonging to Colin
1 sweater
11 pair of underwear 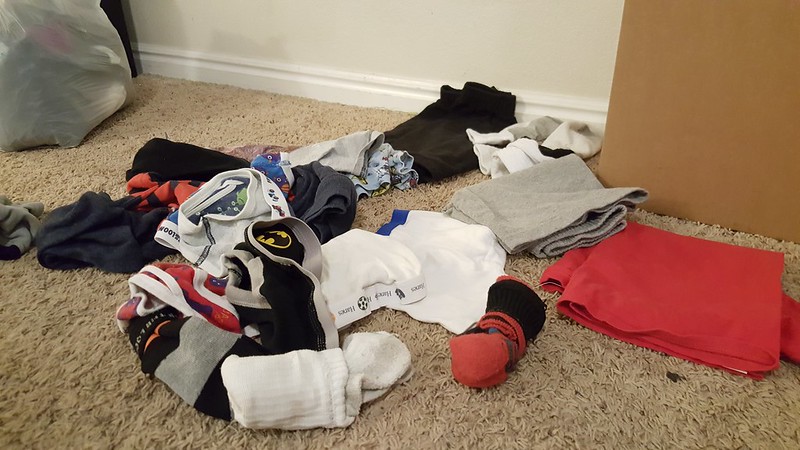 The Contents of Colin's Bag:
6 pullups
1 pair of underwear
1 pair of socks
1 T-shirt
1 pair of pajamas 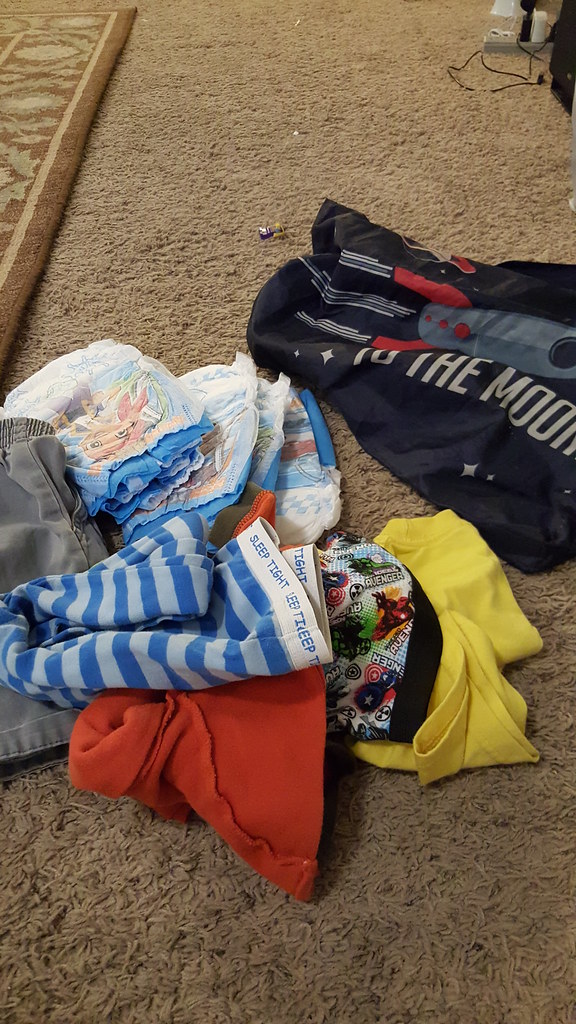 When I saw what they had packed I had to start writing it down but before long I was giggling so hard I could barely dictate it to my phone.  And so instead of repacking for them like I had intended, I just packed ANOTHER bag, with all the things they were missing.  I had considered just letting them live with the repercussions of their actions, but sheesh, Colin is only 5.  And I know my children.  Not having a shirt to wear if some stain type situation had happened to the only one they had with them would have led to a Full Metal Meltdown.

When we got to the Hotel the boys found some drawers in the TV Table next to the mini fridge and gleefully dumped their bags into a drawer each.  All was well. 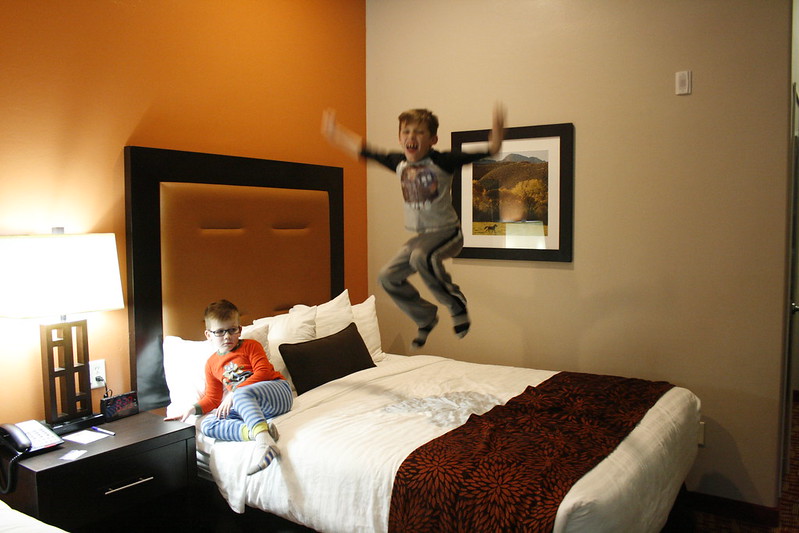 (someone isn't too happy about taking turns.) 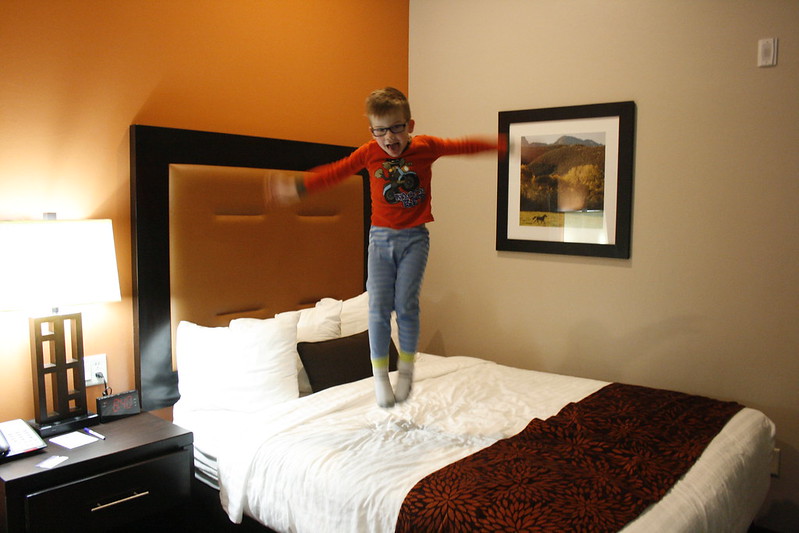 All was well, that is, until the next morning when it was time to get dressed.  I was still lazing about in bed (I think it was all of 7:15 am at this point) listening to my little boys' conversation.

"I only have one underwear!  I forgot to get more!" Colin said in dismay.
"I have a lot of underwear." declared Harrison proudly.  "You can use some of mine."
"Thanks!  But that is my shirt, Harrison!  It is too small for you!"
More rummaging ensued and Harrison said "Oh no.  I only have shorts to wear."
"I don't have any pants at all!" said Colin.

I was snickering into my pillow at this point.  It was all happening just as I had foreseen.  And when Harrison said, "Wow!  We are really bad at packing!"  I burst out into a loud, "HA HA HA!" and then they jumped on me.  Vindication!  We don't get a lot of emotional validation as mothers.  Sometimes a little vindication is the best you are going to get.

And because I ALSO packed them the extra stuff they needed, we had us a real swell time. 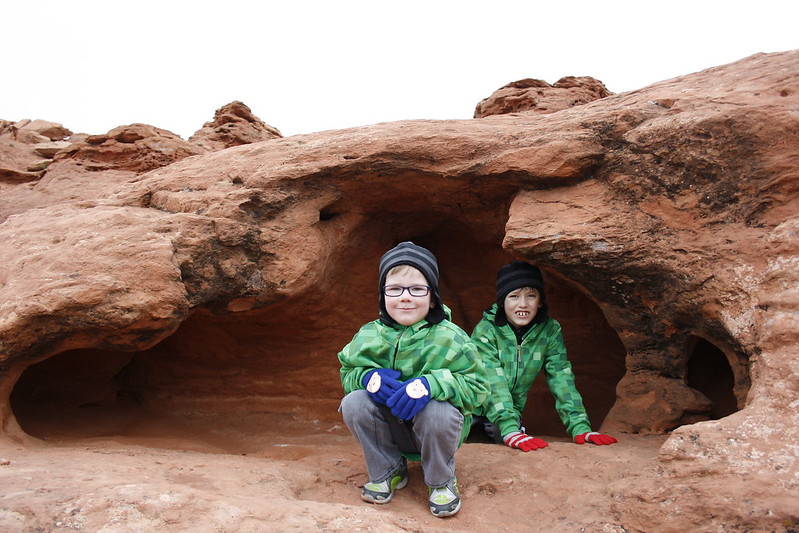 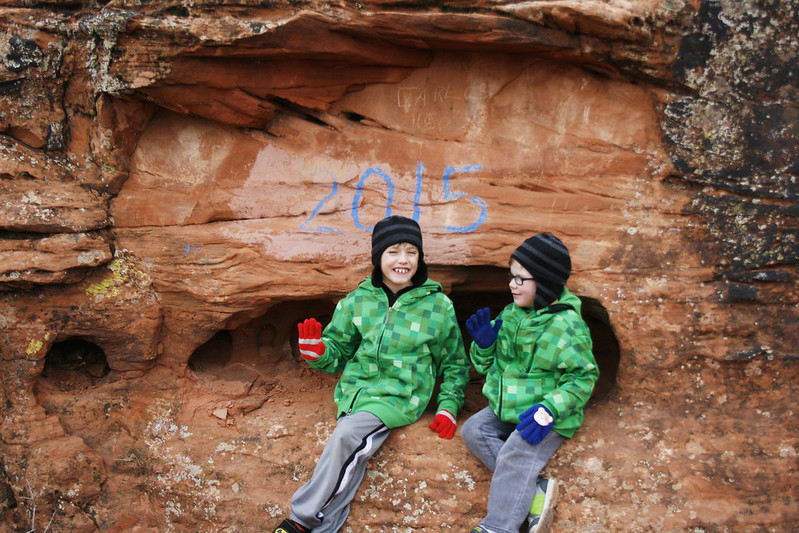 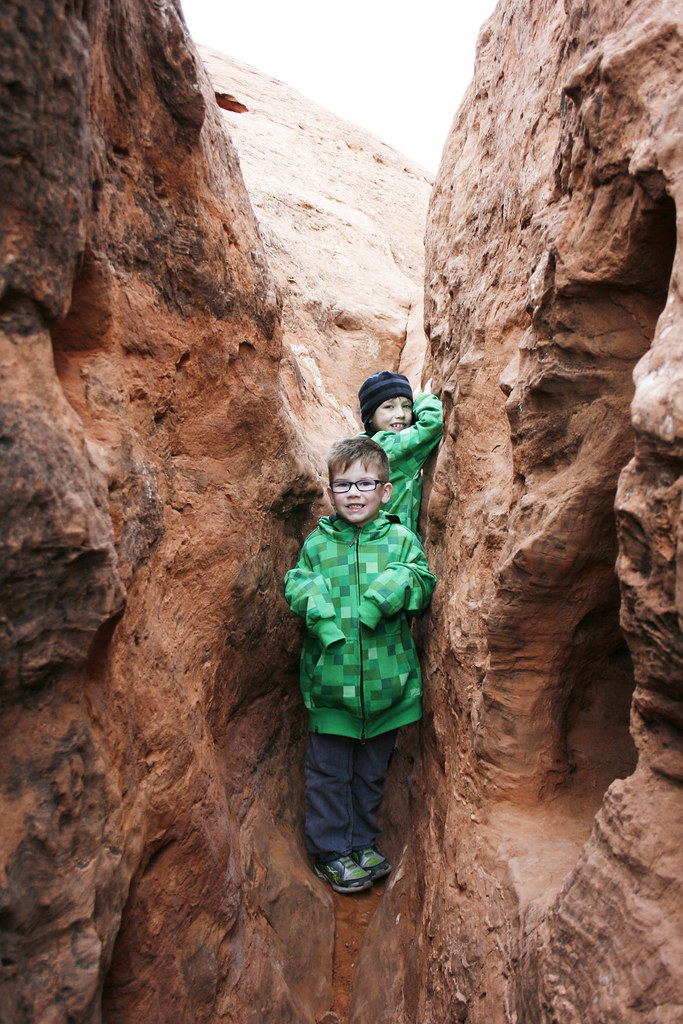 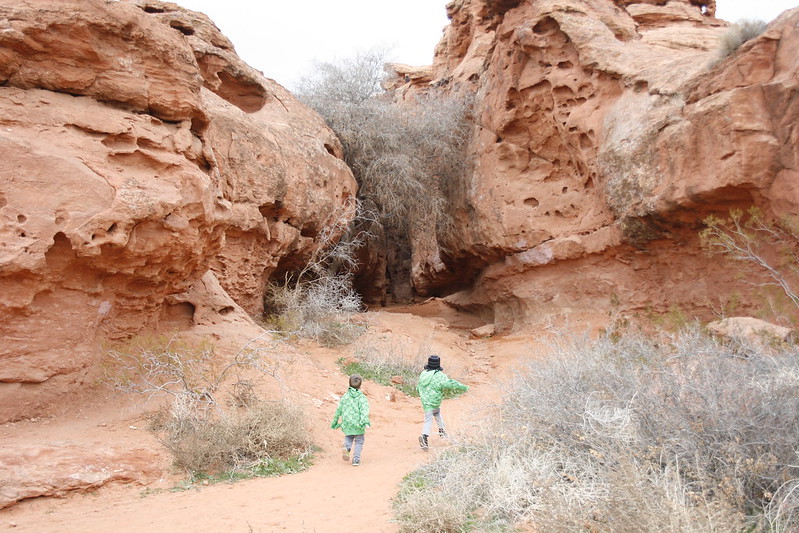 Do you see that happy skip of Harrison's?  That is a boy in his element.  He would happily climb on rocks and explore caves ALL DAY LONG. 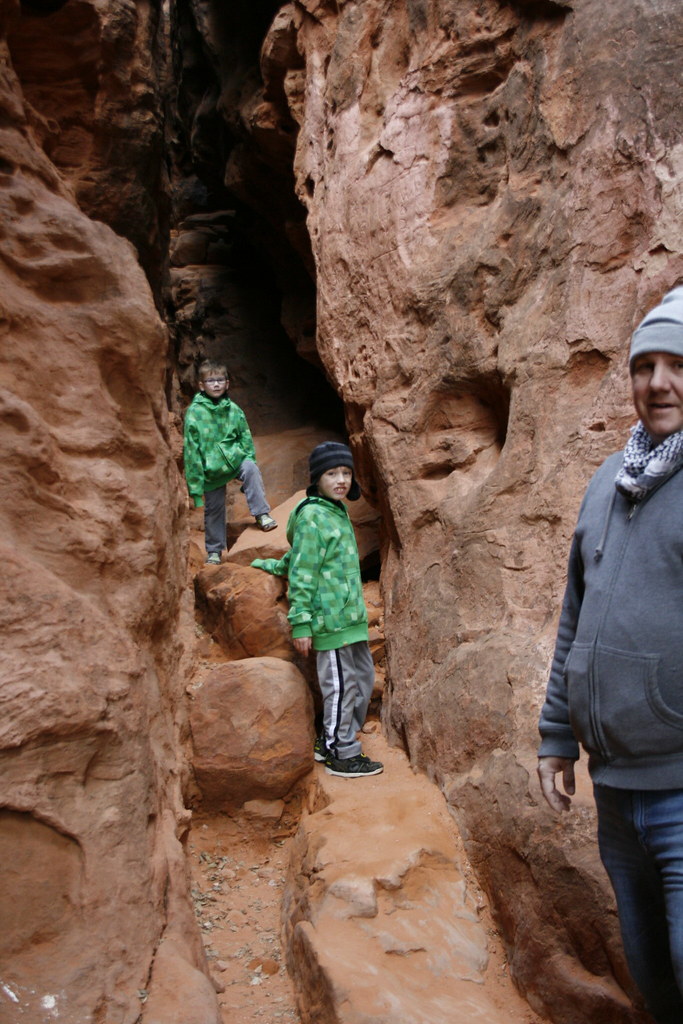 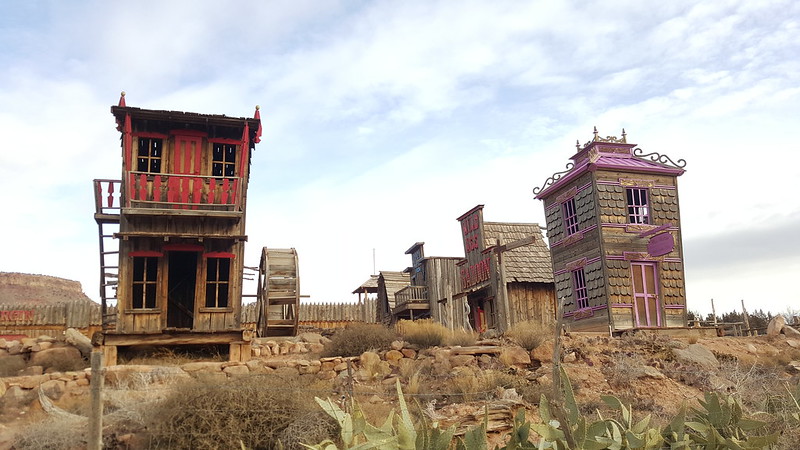 I don't know what this place is, but I totally want to build a village like this in my backyard. 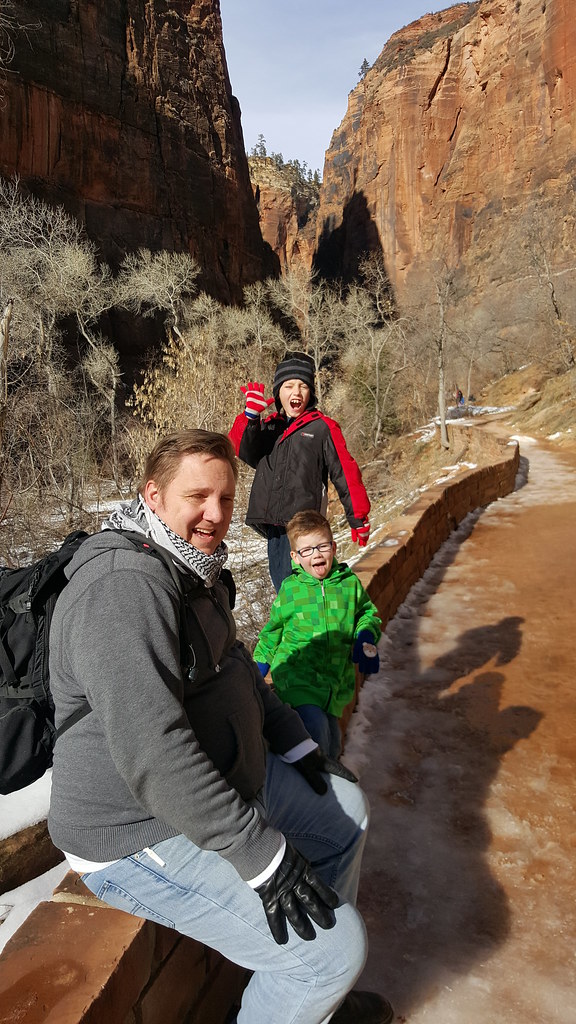 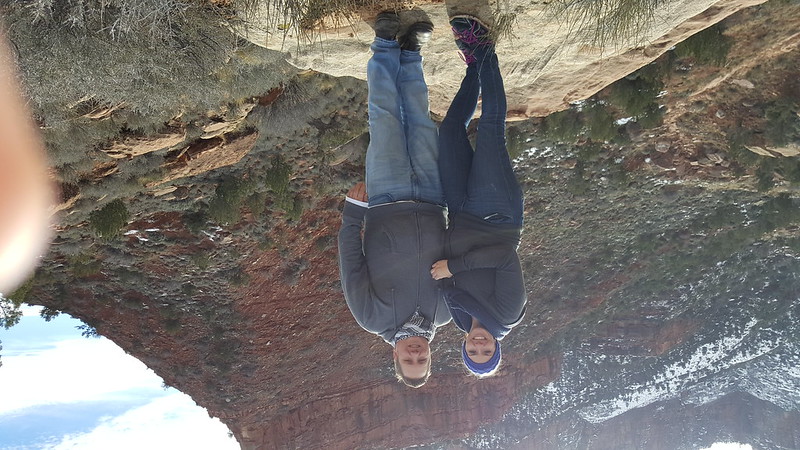 Colin took that picture.  And I think maybe upside down really works for us.

Thanks for stopping by!