The title of this post would probably be more accurate if it was "Kitchen Designing BY Dummies" because I don't know what I am doing. Planning my kitchen is both exciting and terrifying.  And stressful as anything.  I've come up with a few arbitrary things that are important to me that the design is based around, but I'm afraid that as soon as the kitchen is put in, other more important things will become obvious and painful and we will be kicking ourselves for not having the foresight to plan for them.  I've tried to think of everything.  I know that I have failed.  And I am always second guessing myself, but at some point we'll just have to pick a design and run with it.

Here are some of the things that are on my kitchen mind.

1. The ideal for the kitchen triangle (which may not be as important as we've always been told) would be to put either my oven or my sink in the kitchen island.  I don't want to do either. At all.  I don't want my dirty dishes stacked on the island.  Period.  Cooking on the island might be nice, but I'm looking forward to a big stretch of uninterrupted counter space, for rolling out cookies, painting masterpieces with my kids. cutting fabric, or just filling up with clutter and stacks of stuff that I haven't found the energy to put away yet.  Which means the island is off limits, leaving me two walls for fitting everything on.

2. The mudroom enters the house right through the kitchen.  This might be annoying. I'm hoping it will be bearable, because it is too late to change our plans now and it really was the only viable option anyway.  But I want to prepare for the fact that there will be more traffic through the kitchen than I am used to.  I don't know HOW to prepare for it.  But it is surely something I should keep in might, right?

3.One wistful day we spent an hour looking at counter depth refrigerators. And then suddenly realized in a moment of brilliance that since we are still in the construction phase, we can build a recess in the wall and set the fridge at whatever depth we want.  Instead of paying more for a smaller fridge, we can have a big fridge, and have it counter-depth too.  Win Win Wahoo!.  This is my favorite idea for the kitchen so far, but it does effect where we are able to put the fridge.  There is a large support beam that runs through the wall right where I had been planning to put the fridge all along, which means I'll have to put the fridge somewhere else.  That alone is messing up my plans more than anything else.  I had everything where I liked it.  I am doing this all on instinct (which may not even exist, by the way.  I don't know if a sense of most correct kitchen layout comes naturally to me or not).  I keep making up a drawings in Google Sketchup, and hoping that when I see the right one I will know it.  So now I have to come up with another drawing that feels ok to my sense of kitchen rightness. It is proving difficult.

I know I have been fretting over more than just 3 things.  But I have no idea what they are.

Richard said we have to decide on the layout tonight, because he wants to run all the plumbing for the kitchen tomorrow.  But then he went to bed.  It stresses me out, but he is the one who actually has to RUN all the pipes, so it is fair to say he is more stressed out that I.  Which is a huge relief.  I'd hate to be the stressedest.

So here is my favorite layout at the moment.  Hopefully you can tell what is a sink and what is an oven.  The dishwasher is right next to the sink.  And next to the fridge is a tall, deep cabinet.  The countertops are dark, with white upper cabinets above.  Making sense?  In this picture the fridge is built into the wall in the utility room, which really is a great place for it.  But will the fridge feel too far away?  How will I know until it is built and way too late? 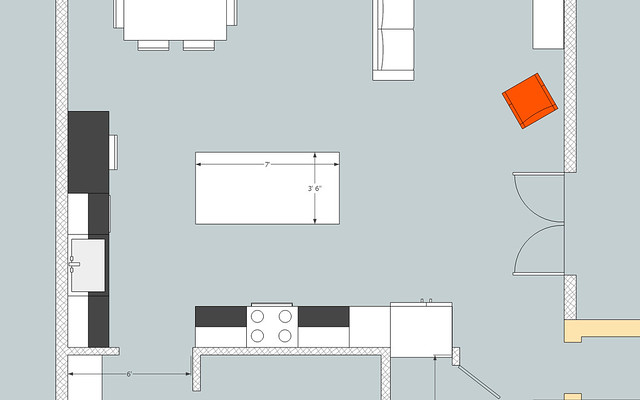 I like the sink being over on the left wall, but the opening just below that goes into the mudroom and I have some concerns about children running by while I'm washing dishes.  Will it really matter though?  No matter where I put the sink, the children will find me.

So that is where we are at the moment.  My tiny little brain is about taxed to the breaking point.  It is just too many decisions for my simple mind to make.  To sleep!
Labels: Remodeling