Here is where things stand at the house as of right now. 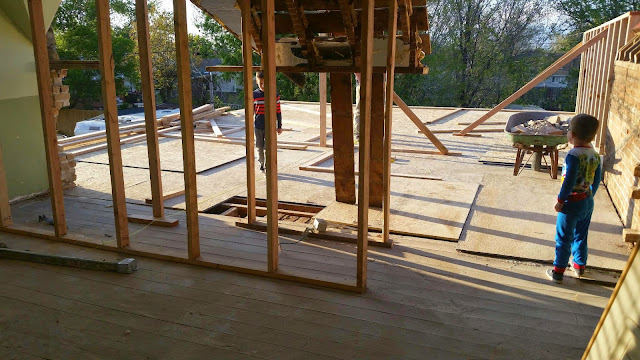 That brick wall that was halfway torn out last time we talked has been completely removed.  It wasn't really "supporting" anything as it was.  So they tore it out and are going to frame in a new wall.   You might be thinking that things should be moving along faster than this, but tying a new build onto an old house comes with a lot of special circumstances and snags along the way.  For instance, when they knocked out the wall to make the hallway from our old master bedroom to our new master bedroom, they found that the new floor and the old floor aren't even.  It is flush on the west side of the room, but the floor in the original house slopes down about and inch or so and they didn't realize it until they knocked the wall out.  So that is an exciting little development that they have to find a way to deal with. 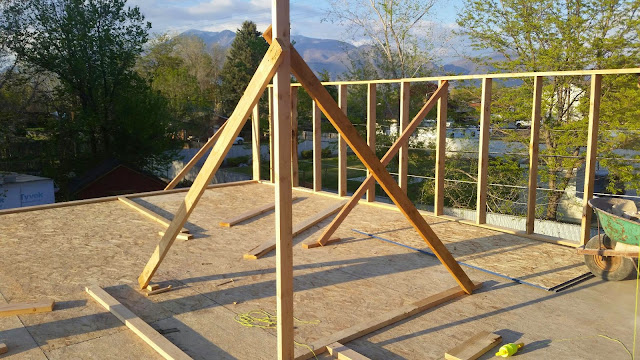 There is one wall up on the 2nd floor.  And this Teepee you see in the above picture is going to help them build the roof or something?  I don't ask questions anymore, so I don't really know. 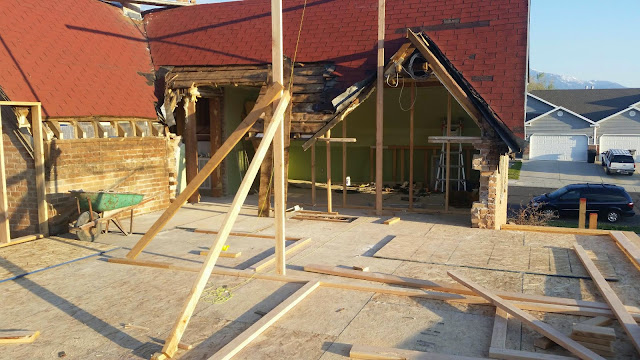 So, yeah.  That is where things are.
Fun fact!  Lani the builder is going to New Zealand for 3 weeks on Saturday.  So things are going to come to a grinding halt very soon.  He had hoped to finish all the framing and get the roof on before he left, but what with uneven floors, and falling apart brick walls, that is not going to happen.  Richard's job while Lani is gone is to do all the electrical and plumbing.  Which isn't totally possible without a ceiling, but he'll do what he can. You know, I actually thought that once the building finally STARTED, that all my stress would melt away, and we could just sit back and watch the new house materialize before our eyes.  Ha ha.  I am so naive.  The stress NEVER ENDS. Unlike this post.  Which is over.  Goodbye.
Labels: Remodeling