I know all moms claim that they don't know what they are doing.  I sure hope that is true. Frankly, I am counting on it.  Knowing that everyone else is just as lost as I am is the only the thing that keeps me going sometimes.  Still, I always kinda suspect that I am a little more clueless than everyone else.  Or maybe everyone else is just better at ACTING like they've got it all together.  I'm not sure which.  Not that it really matters.  All I can do is try stuff and see if it works.  Usually it doesn't.  But I keep trying stuff anyway, cuz what choice do I have?

On Saturday, I made Biscuits and Gravy for breakfast.  Apparently, this was a bad idea.  Harrison DIDN'T WANT BISCUITS AND GRAVY FOR BREAKFAST!  HE WANTED PANCAKES!  HE HATES BISCUITS AND GRAVY!    It was 8:00 am and that wasn't the first or even 2nd time I had been screamed at that morning and I wondered how there could be so much screaming in my life when half of the world was still asleep?

So I sent him to his room, to which he did not want to go.  To make sure we understood this, he opened his bedroom window, pulled out the screen, and chucked everything in his room out of it.

Hadn't even had breakfast yet, and already 1/6 the contents of my house was sitting outside in my flower bed.  My poppies didn't survive.  Forgive me if I sound like I'm whining.  I AM whining.  It was a very angry morning for everyone.   Especially me.  Sometimes I feel like the rage starts to seep out through my eyes and skin, until I'm a pulsating ball of fury which takes out anything in its path.  (It's fine though.  I'm sure it is nothing to worry about.)

So this time, I channeled my anger into a garbage bag.  I had already been feeling for a while like my kids just have too much stuff: more toys than they can play with, more clothes than they can wear, more than they need and more than I can stand to pick up off the floor 5 times a day.  So I took that garbage bag (5 of them, actually)  and I filled it with all the clothes they never wear and kept only my favorites.  I filled it with all but a few pairs of pajamas for each boy (because for some reason Colin has about 40 pair, which Harrison insists on wearing),  And I filled it with Every Single Toy in the house.  Every toy.  Every single toy we own went into a plastic garbage bag and I locked them all in my bedroom. 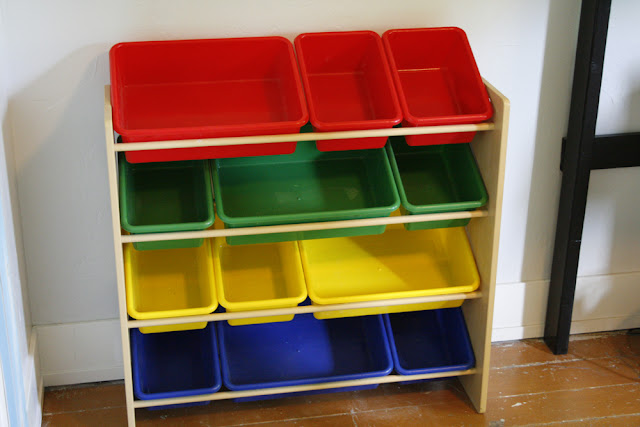 Harrison was upset, and he was really worried I was going to throw them all away, but after he finally ate some breakfast he and Colin went outside to play and forgot about the Great Toy Confiscation of 2012.   And my temper finally burned out and I turned back into a normal person.  Still, I decided to leave their toys  in my room for a while, just to see what would happen.

So NOW what?  NOT cleaning up after them is one of my very favorite things to do.  So I can't give the toys back.  Where before I would have thought "I can't get rid of this.  He loves it so much" that just doesn't seem to be the case.    I've already got my toys on a rotation system, where half of them are in a box and I pull those out and put the others away every 3 months, but clearly I can do more.  Maybe I'll get rid of all but their most favorite toys.  Maybe 5 a piece?  Maybe 5 in storage and 5 out to play with, which can then be rotated?  It feels a little crazy.  Can a Mom actually DO something like that? Like I said, I really don't know what I'm doing but despite what we have been led to believe, our children don't actually need toys to survive. Or to be happy.  It might just be possible that, unless we are talking about whipped cream, less really IS more.
Labels: Thoughts