I was going to wait to do a big reveal once all the finishing work was done, but I really don't know when that is going to happen.  So let's just look at it now.  Richard put the light fixtures in and I am just too excited not to share.  No doubt you get as excited about light fixtures as I do.

If you want to add a little pizzazz to the moment you could close your eyes for a minute, then make an exciting noise, like "Bum Bum" (which could sound like drums if you say it right, but if you say it wrong sounds more like an insult by a 4-year-old ) and open your eyes really fast.  Go ahead and sprinkle all the magic on the moment that you want to. 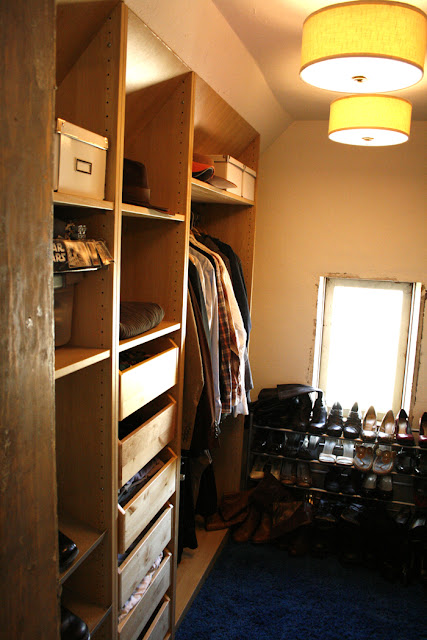 The lights came from Lowe's and they take fluorescent light bulbs with these really funky bases.  I don't know why.  There are as many different light bulbs in the world as there are fish in the sea.  I do not understand it.  Sure, they may want to encourage people to use CFL bulbs, but since regular incandescent bulbs are going to be illegal eventually anyway, can't they just make all the CFL bulbs with regular bases so I can buy all my light bulbs at Walmart?

Anyway, he hooked the lights up, and switched on the power and the lights started flashing like strobe lights at a rave and that is when we realized those bulbs can't be used with a dimmer switch, which is what we were using in the closet.

You might now be thinking "Dimmer switch in the closet?  What the tarnation do you need mood lightin' in there fur?"    And while, yes, I do like to pick out my clothes in the half dark, it is not for mood lighting.  It is because those dimmer switches come with remotes, and being able to turn off the closet light without getting out of my bed?  THAT is not a luxury we had any intention of compromising on.  Richard said "We'll just have to change it so that it takes a regular light bulb."  I said, "Is that possible?"  And he said, "It is if you're an engineer."  He was only a little smug when he said it.

So he fixed it.  He spent an evening and changed out the port the lights plug into and we only tripped the circuit breaker a few times, and only blew out one light switch and Richard only got one small electric shock and I only screamed and fell on the floor one time and now my pretty light fixtures take bulbs with regular bases.  Awesome. 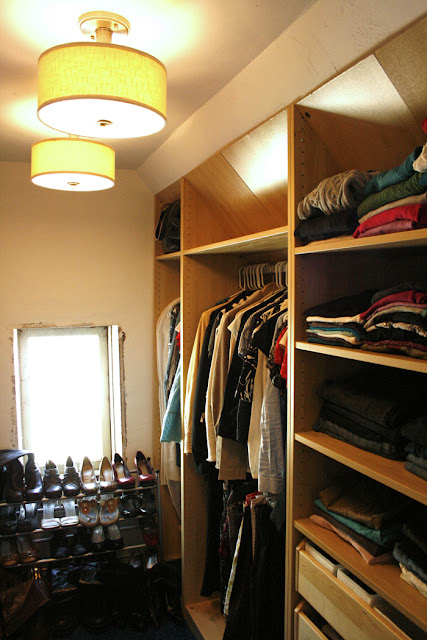 So I've still got to put up trim around the window, but first the window and the window frame has to be replaced, and that takes time.  It does.  You don't know.  And we've talked about maybe moving the window a little, because it is so low and off center.  So, yeah.  Time.  I also need to put a shelf above the window for my boots to go on, but first we've got to put something in this little section on Richard's side of the closet.  There are pipes back there, 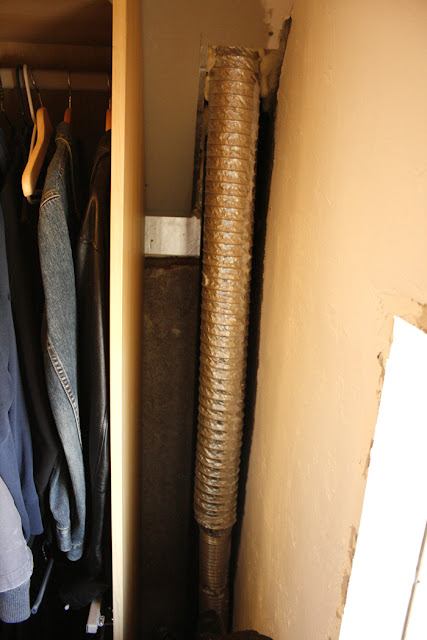 so the closet couldn't go all the way to the back wall.

I'm so glad we went with the Ikea closet system in here.  We had planned to build it from scratch, but I can't even fathom how long that would have taken, whereas this we put together in a few evenings.  And lots of it I did by myself.  And it really was pretty easy to custom fit to our angled walls.  Using Math!  (oh, and notice how the walls behind the closet are not finished or painted?  Yep,  that is called "LAZINESS" and that is how I roll.) 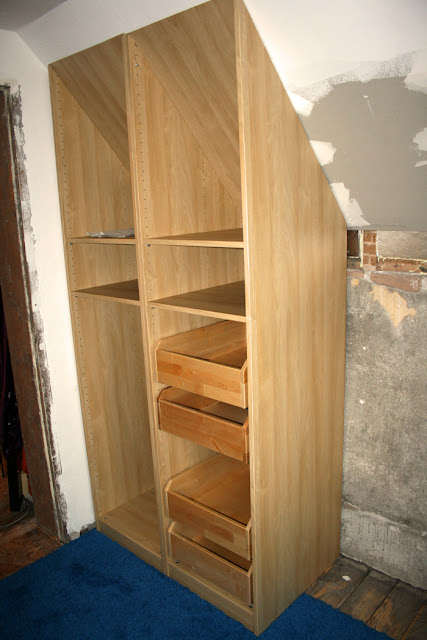 First we made a cardboard template that fit just right and then traced the angle right onto the closet pieces.  We just cut them with a skill saw.  Then we put the sides and bottom together, measured exactly where the angle was, and scored the back piece and carefully bent it on the score mark.   That sort of worked.  It really wanted to break. 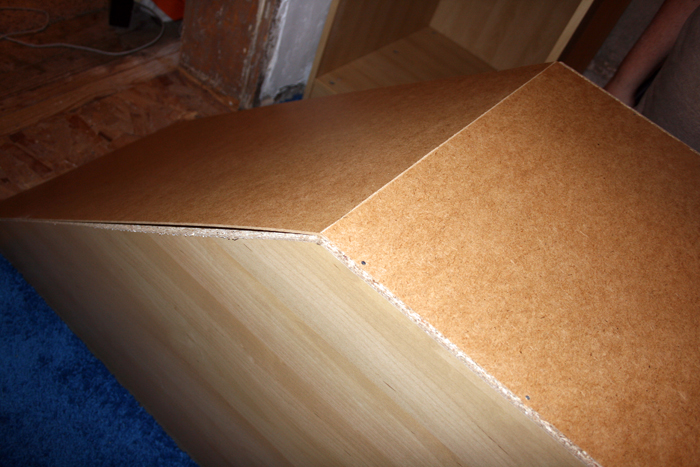 See?  It was kind of a pain, but not nearly as much pain as building it all from the ground up would have been.

I can't believe how much room there is.  We did purge a little when we cleaned the whole thing out, but mostly the system just seems to be utilizing space so well that the whole thing feels roomy. It feels twice as big as it did before. It is awesome. 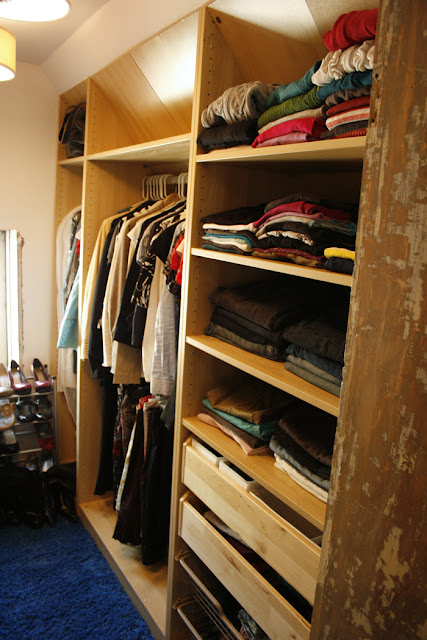 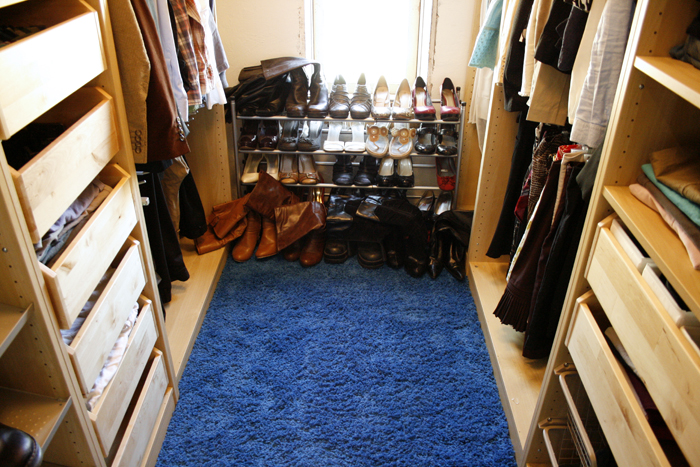 I painted the room white, because we have lots of white paint.  I don't mind white, but I really don't like it in there.  Maybe because the finish is "Eggshell".  It is so flat, it just looks like drywall mud on the wall with no paint.  I also don't really like that shaggy blue carpet, but it is technically temporary, so Whatever.

1 nice feature is this drawer where I can keep my scarves and belts.  And also all the extra hardware and junk that came with the closet system that I figure I will keep for a couple of years, then throw away, and then the next day realize we need another screw and plastic doohicky that I just threw out. 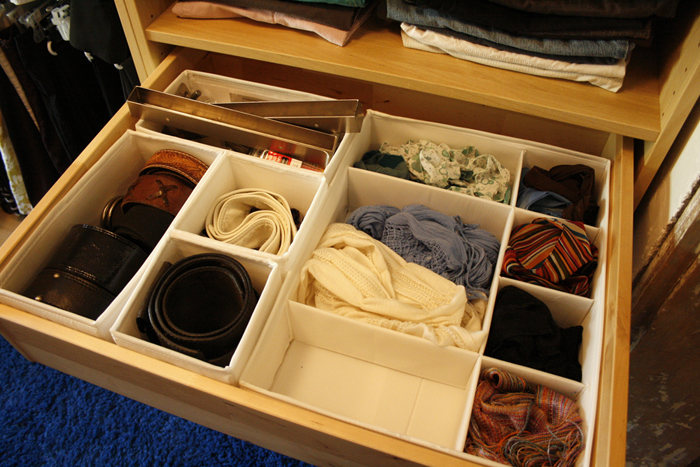 Richard's finally got a spiffy drawer for all his ties.  And a shelf for his sweater. 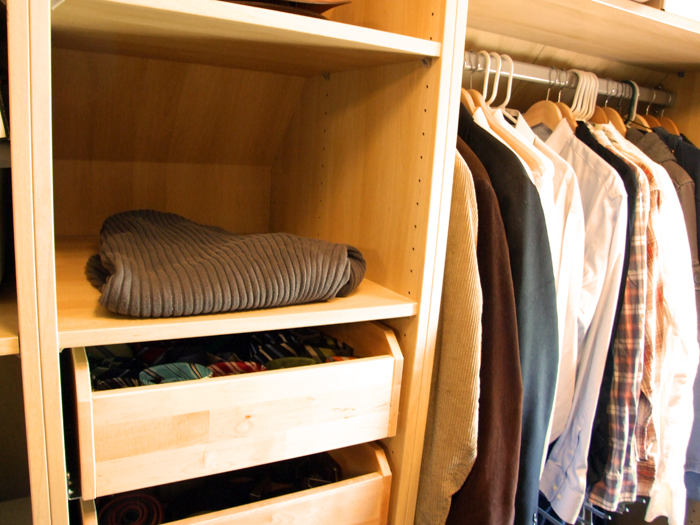 And let's not forget the most important part, somewhere to keep Legos. 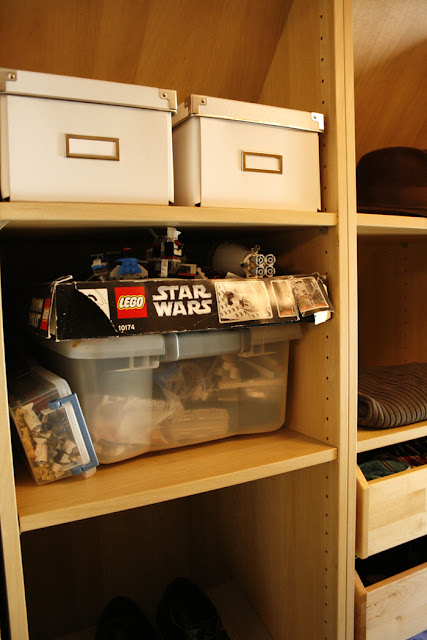 And just to refresh your memory, lets see the before and after shots again: 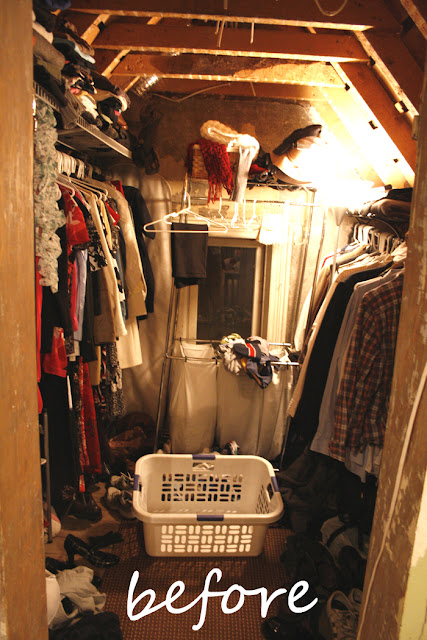 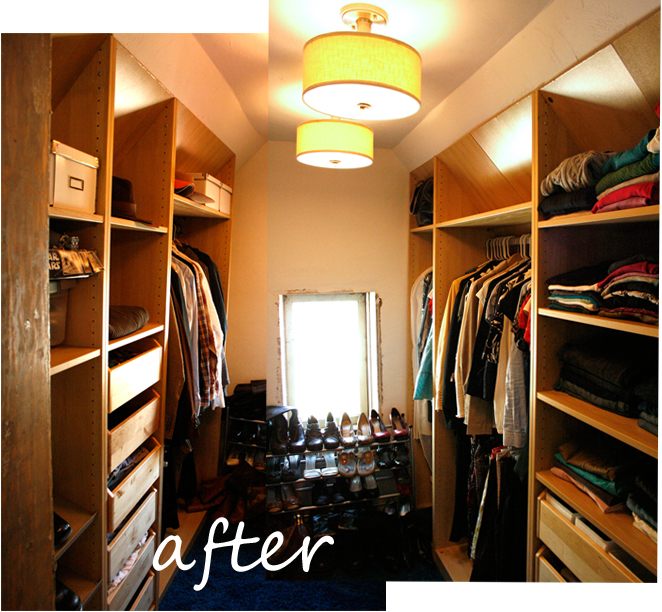 I even labeled them for you.  Lest ye get the two confused.  And that is it!  As good as it is ever gonna get!
Labels: Remodeling