What I Won't Miss About My Closet

Boy, I pushed one little button by mistake, and suddenly my rough draft became my final draft and everybody is like "B minus!  There are spelling errors!"    Calm down.  I fixed them.  THIS is the final draft, ok?


We decided that instead of having me suffer Death By Remodeling, maybe we should give me something to do. Not that I don't have things to do, but. . . well, I don't.  So Richard agreed that the closet in our bedroom could be my "little project"  He always says it with quotation marks like that.  In kind of a high voice, like I'm going to deck it out in glass unicorns or something.  Maybe I will.  So, the closet is mine.  We figured that I should be able to do just about everything in there on my own, since Richard's time and talents are better spent elsewhere.

Here is how it looked when we bought the house. 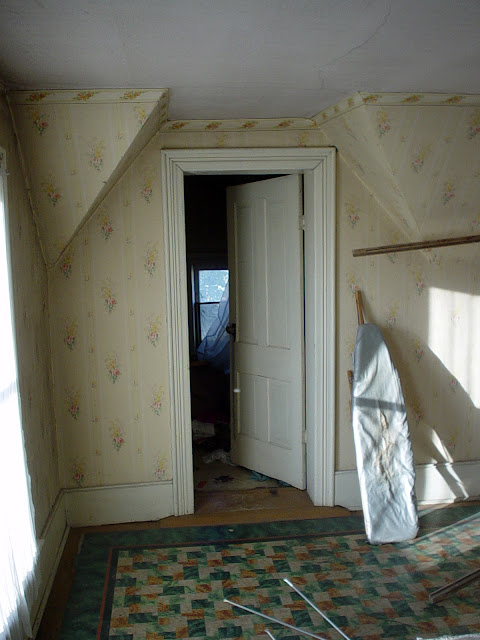 Uh, sorry.  That is a picture looking into the closet from the bedroom.  I don't seem to have an actual picture of the closet itself.  You can sort of see inside.  See how it has a window and lots of junk in it?  You'll have to use your imagination for the rest.

The closet is the very first place we started when we bought the house.  After we signed the papers we went and got a pizza and sat down in that closet with some work lamps and went through the stuff.  Boxes of papers, mostly.  We really thought we might find some treasures--stacks of cash, some stock in AT&T from 1905, or maybe we'd find something more wonderful than we could even imagine!

And I guess I never took a picture of that closet.  Not until October, 2005, when we had been in the house for almost 2 years. 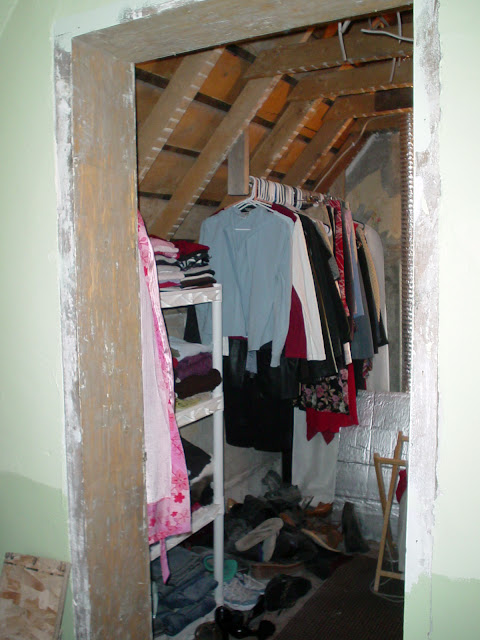 And that is how the closet has been for 7 years.  Every once in a while Richard would surprise me by mounting some bar or other to the wall for me to hang my clothes on, instead of those crappy temporary closet systems we were using, but his side has always been the same.

This is how the closet looked 2 weeks ago: 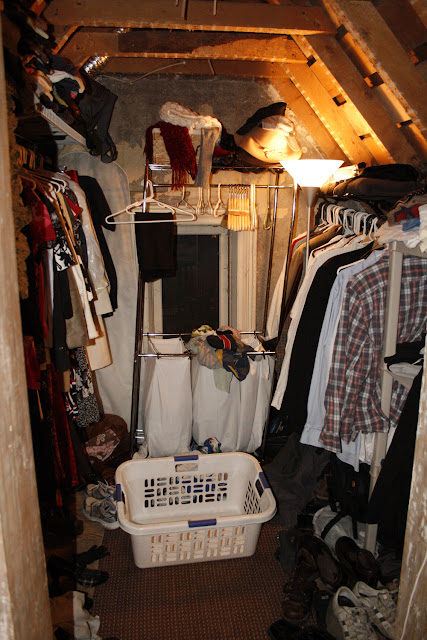 Same Closet.  More Crap.  It probably goes without saying that finishing up this closet has not been that high on our priority list.

So a couple weeks ago I pulled out all the clothes and now they are stacked and piled up all over our bedroom.  Fun!  I like to roll around in them and pretend they are nice clothes.
Here it is, all cleaned out and looking ready to have the RE  modeled right out of it.

I must have done something wrong though, to make the room split in half like that.  I clearly don't know my own strength.

The first thing that needed to be done was removing the chimney. 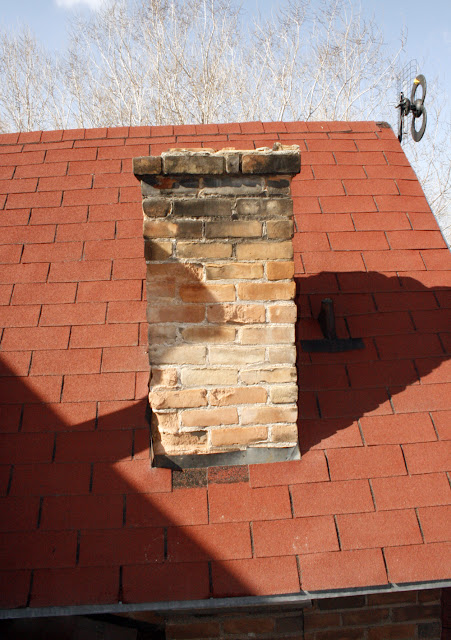 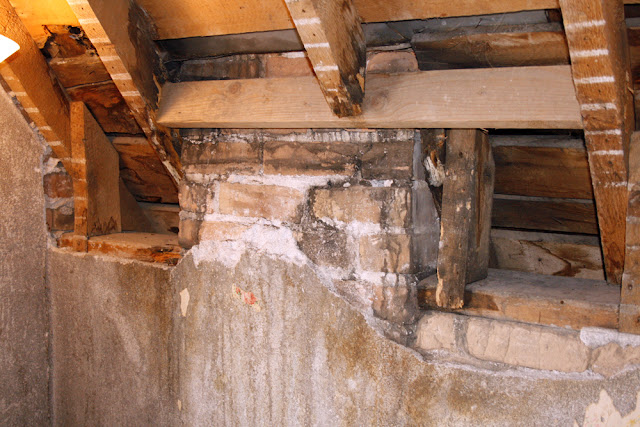 This house was built before the days when a person could just pop a DVD in their dvd player and watch a video of a fire burning in a fireplace for hours.  They actually had to build real fires in all the wood burning stoves that were in every room of the house.  Anyway, that chimney comes up from the dining room downstairs.  It was time for it to go.  So on Thursday, while Harrison was at school and Colin was taking a nap, I climbed out on the roof to see about taking the chimney apart.  I was all set to beat it mercilessly with a hammer, but those bricks were pretty much just resting there.  The mortar holding them together stopped holding anything years ago, so I just lifted the bricks off, easy as you please.  No prob.  Then I threw them into a pile in the back yard.  That was the time consuming part.   I pretty much spent the afternoon standing on the roof, chucking bricks.  It was like Highschool all over again.

I was actually very worried that I would accidently drop a brick on Richard's car in the backyard, or maybe throw one wildly and break the window of the Motorhome.  If you've ever gone bowling with me, you know this was a valid concern.  But I was very careful and I didn't break anything that didn't deserve it.    And I made this beautiful hole! 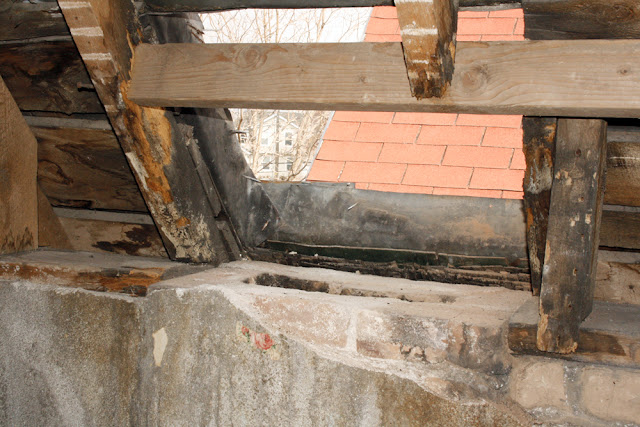 Then, however, we reached a standstill.  You can see all the wood around the hole is very rotted and falling apart after a century of water leakage around the chimney.  The wood was going to have to be replaced and Richard decided he was probably going to need to fix it himself.  I was glad, cuz the magic of velcro can only do so much, and replacing rotten joists and roofing is a bit beyond me.  But when would he find the time???

He shoved some insulation in the hole and then it snowed and I was in all kinds of suspense wondering how long we would have to live this way.  Luckily Richard took pity on me and stayed home from work yesterday and fixed it.  He cut out the rotten wood, put good wood in and then had to put 3 layers of 3/4 inch playwood on it to make it level with the roof and the 6 layers of shingles on it.  No exaggeration. 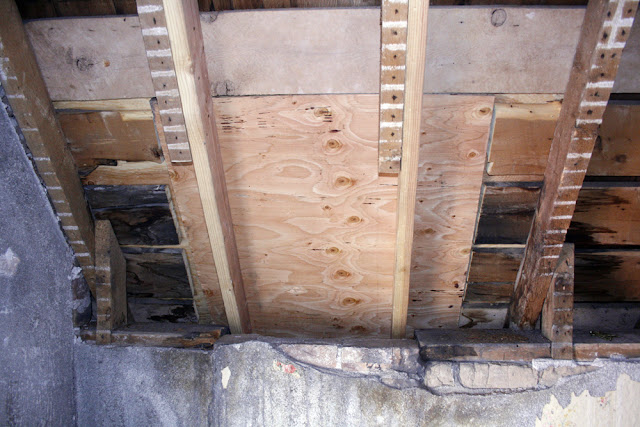 Then, yesterday afternoon, he watched the kids and I put the shingles on.   The weather report said it would rain last night, so we were kind of in a hurry.  I mean, we went out to a movie, but after that, it was really crunch time. I did it though.  I finished up just as it was getting too dark to see.  And I really should have worn gloves.  I think there is fiberglass or tiny porcupines in the shingles that gets under your skin and hurts like the dickens.  Next time any of you do some roofing, take my advice.  Wear gloves. 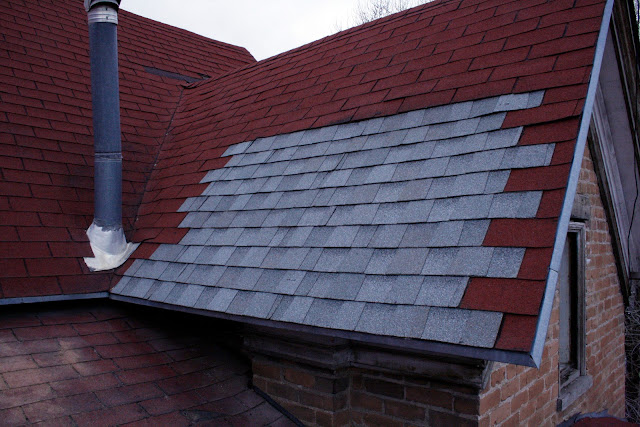 Yeah, it doesn't match.  Nobody cares.  That whole sad roof is going to have to come off before too long anyway.

So someday, in the not-too-distant future, this closet will be all done, and I won't miss the old one at all.

Yes, right now it is unfinished and dusty and ugly and not all that functional, but the number one thing I won't miss is the lack of insulation.  It is COLD in there.  Breezy, even.  I cannot wait until it it insulated and drywalled and WARM. I have been far too cold for far too long.  So stay tuned.  There is more to come.

You made it!  This is the end!  Thanks for hanging in there with me.  Ha!  Get it?  Hanging in there?  Just like hangers do in a closet?  Humor!
Labels: Remodeling