Forever ago I saw a cake stand on Bakerella that someone had probably given her for being awesome or something and I fell in love with it, but though she told us where we could get one ourselves, it was way too expensive.  So I have been waiting these long years for someone to give me one, but I'm afraid that I too will have to become awesome first, and I think it might just be time for me to give up on that dream.

But then, on some clever person's blog (I CANNOT remember which) some girl made a cupcake stand by gluing stuff together and I realized I could do that too!!  So I went to DI.  And I found the following: 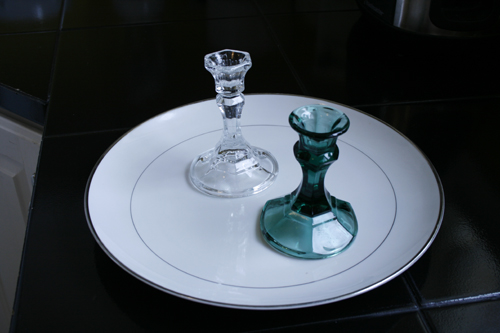 For only like $25!!   Ok, it was probably closer to $4.00, but even that was more than I thought I should have to pay.  D.I. has way too high an opinion of their junk if you ask me.  Not to mention the completely arbitrary pricing.  That china platter was $1.00, but I also could have bought some ugly plastic plates for $2.00 a piece.

Anyway, I pulled out some newly purchased gorilla glue.  Cuz that is what you use, right?  And I started gluing.  I have never used gorilla glue before.  So I wasn't expecthing this: 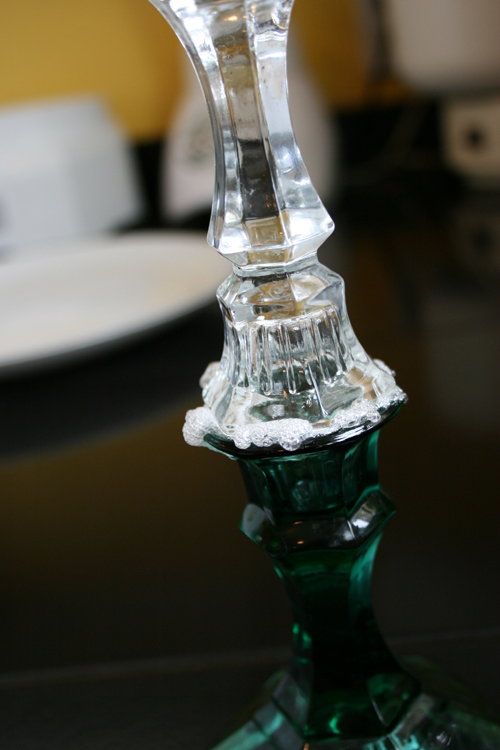 I showed Richard and he just nodded and said "Yep." like that is exactly what he expected to happen.  I trimmed off the bubbles with some kitchen shears as best as I could and sanded the rest off with an emery board, cuz it is what I had handy 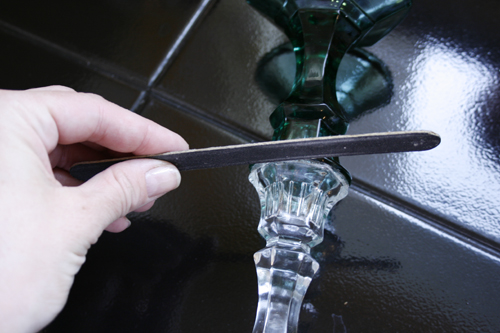 That pretty much worked, so I glued the platter on, using a lot less gorilla glue this time: 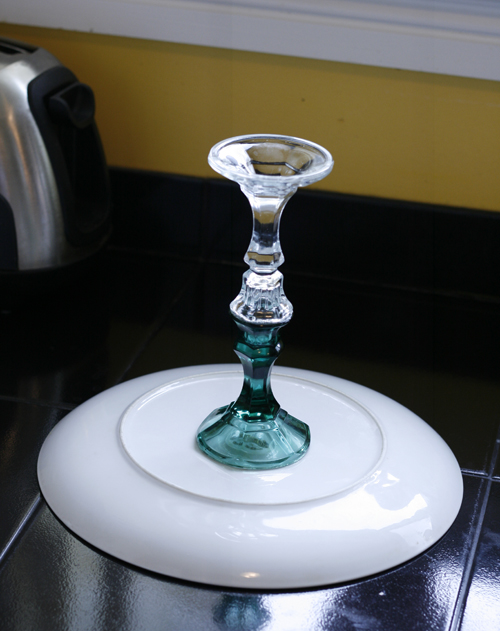 Which is where I got stuck.  What primer do I use for glass?  I searched online for what felt like an eternity, and both the websites I read just said to use "primer made for glass".  Thanks.  That is incredibly helpful.

I finally broke down and went to the local, tiny little hardware store and asked them.  The 2 guys working there were anxious to help.  So I said
"What primer would I use for glass?"
Guy 1 said "Glass?  What do you want to paint glass for?" in a very are-you-a-crazy-person? tone.
I said "For fun?" and he just looked at me, concluding that yes, I probably WAS crazy.
Guy 2 said, "I don't think you need one."  He looked at the cans of spray paint on the shelf and said, "Nope, none of these say they are for glass.  If it was me, I wouldn't use one.  Save yourself a step."  Again, very helpful.

Now I may not work at a crappy hardware store, but I'm pretty sure that if I paint strait on glass, when it dries I'll just be able to scratch it off with my fingernail.  But I don't argue with paid employees so I pretended like I thought they were right and was glad of their insight.  They finally left me alone and I picked out some KILZ Interior Oil-Based primer, which says it can be used on glossy surfaces after they are scuffed.  Then, because I didn't want them to think I was completely disregarding their sage advice, I bought some colored spray paint too.  I grabbed a very happy yellow and told Guy 1 who was now at the register that I was painting a bed too.

He said "Someone is ambitious today."  "Yep." I said, (cuz, yeah.  2 cans of spray paint.  I'm a busy, busy bee.  They obviously don't get a lot of people in there who are doing. . . stuff.)  "Why?"  He said, again questioning my sanity.  How do I answer that?  What kind of question is that for a guy who owns the hardware store to ask me?  He should be singing my praises.  I'm probably the only customer they had all day.  But then he kept talking and to make a long story still pretty long what he said is that all this rain isn't normal and I think it might be my fault.

Oh yeah, my cake stand.  Are you still here?

So I  sprayed a bunch of thin layers of primer. 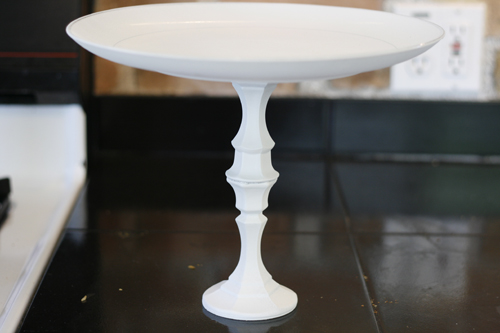 sanding away any rough spots.  Did you know you could sand primer?  I sure didn't.  I had to read it on the internet.

And then I painted a bunch of coats of blue and a few coats of a clear gloss laquer and had this: 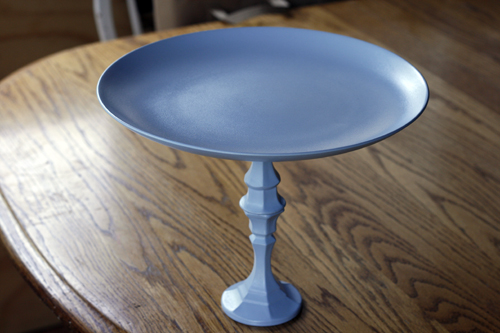 Ok, so here are a few things I learned: 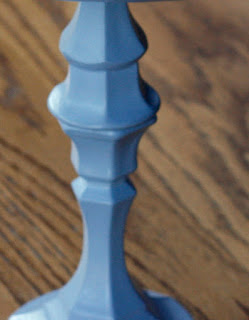 
In any case, painting the glass seamed to work.  I tried scratching it a bit with my fingernail and it seems to be strong enough to withstand them.  I need to find a shinier top coat though.  I do love things that are shiny.  Boy, I sure don't know how to stop talking.  Maybe you should just go.  I'll run out of steam eventually, don't worry.
Labels: How To's & DIY's