I'm Happy Where I'm At

Prepositional phrase be hanged. (or is it a dangling participle?)

As you can probably tell, I give my blog posts lots of thought before publishing them.  I don't just pound out some drivel, hit publish, and move on.  I think it out.  I plan.  I write draft after draft after draft, scrap the whole thing and start over again and then write several more drafts before each post is ready for publication.  Each post is, by anyone's standards, a short masterpiece and I wouldn't have it any other way.

Today though, I am just going to write it.  I've already typed in my title, which means I have a general idea of what I want to say, and so I am just going to start saying it, and see what comes out.  It should be a pretty exciting exercise.  Sort of like Jazzercise.

I am 33 now.  I am officially "Getting Old", there is no denying it.  The other day  I was thinking about guys that I used to date.  I totally do that all the time.  I was always into very active, outdoorsy guys, who like hiking and rock climbing and snow boarding, sitting in frozen lakes, or running directly up the side of a cliff or jumping out of a helicopter into a swimming pool.  Stuff like that.   Which is fine.  Whatever.  The problem was I just wasn't so much into that stuff.  I mean, it is fun to do sometimes.  Who doesn't love a good run up a cliff now and then?  They just aren't my passion.  But I felt like they should be.  So I always had to pretend like I actually cared about hiking boots and bike tires and stuff that I don't even want to type because it bores me so much.

Take What's-His-Name, that I dated in college.  He always acted like the day was a total waste if he wasn't out living it to death, by driving around in the mud in his truck, or riding his bike down the side of a building.  He had even arranged his schedule specifically so he could go skiing twice a week.  Which really doesn't sound bad in writing.  Richard, on the other hand, was working so hard in school that he barely had time to look at me.  What's-His-Name was trying to find a major that required the least amount of work, and always said he hoped his wife would want to be the bread winner so that he could stay home all day.  Gosh am I glad I didn't marry him.  That guy was a ding-a-ling.  And I mean that in the nicest possible way.

I should probably be completely honest at this point and say that me and What's-His-Name never actually dated.  He never kissed me or even held my hand or anything.  I think he might have been just a little bit gay, cuz look at me, I was gorgeous. 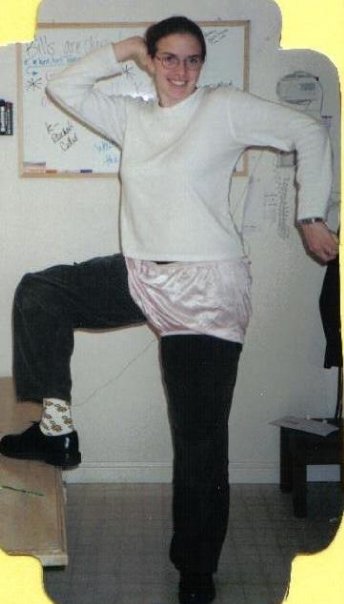 I guess the point is that I didn't really know what I was looking for, so I am so glad I just happened to find it.  I would have been miserable married to one of the guys I was usually interested in.  All of our money would have been spent on expensive crap from R.E.I and I would have had to spend every weekend carrying a 97 pound backpack through a river filled with alligators.  I admit these people do some very exciting things, but it exhausts me just thinking about it.   And yes, Richard would love to spend a lot of money at R.E.I too, but what he loves is camping, which for me means sitting around a campfire eating the food that HE cooked.  Nothing wrong with that.

While it is true that sometimes I wish I weren't quite so lazy, mostly I am just so glad that I get to be.  I like my husband and I'm glad he's mine and even though my house is messy I'm happy where I'm at.    And that is a nice place to be.
Labels: Thoughts