Style that is Out of This World

As you all know, I like to keep things fresh.  "Fresh as a baby's bottom", the saying goes.  And that level of freshness is getting harder and harder to maintain these days, what with the world and all of its things and changes and government policies.  I think you know what I am getting at.  "How can this be?" I ask myself a hundred times a day, which gets really annoying, but what what I REALLY want to know, is
Why don't Aliens wear pants?


Ok, yes, some of them do.  Lots of them do, I guess.  The ones who look Human are usually fully clothed and I guess most of the humanoid ones like to stay modest too, but certainly not all of them.  i.e. this guy: 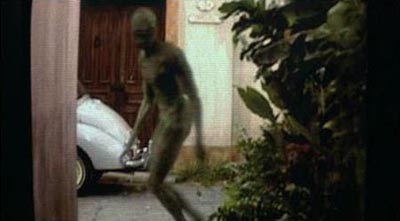 Besides, most of the ones pretending to be human are only pretending to wear clothes, which really doesn't count.  I might pretend to wear pants with all my heart, but that won't change the fact that my bloomers are showing.

It's shocking, right?  Who do these aliens think they are?  Are their races so technologically advanced that they believe they have progressed beyond the need for clothes?

Cuz I would have to disagree.  No matter how "sophisticated" they think they are, they are still teleporting around the universe in the buff and I think they would get just a little more respect if they put on a nice suit, or maybe a dramatic hat and cape.  Even a bandoleer can work wonders.

Take this guy, from some early episode of Star Trek, who is wearing a futuristic little onesie.  He is the very height of fashion, and all set to go out and hunt a human for a while.

Makes all the difference in the world, doesn't it?  Maybe dressing for success isn't such a backward, human notion after all?  I just don't quite understand a civilization that doesn't include clothing yourself as an important part of your daily activities.  (though I think my husband definitely disagrees with me).

Still, of all this alien immodesty, I find nothing upsets me more than male aliens who run around naked from the waist down.
What in the world is that about?

And obviously, it goes without saying that I don't have permission to use any of these pictures.