Sock it to YOU!

It goes without saying that my husband is Practically Perfect in Every Way.  He's like the male Mary Poppins, with more singing.   oh wait.  Not singing.  Guns.  Guns and knives.  Yeah, Mary Poppins with guns and knives.   I would watch that movie.  Well, as part of this perfection he suffers from, he frequently takes his socks off while sitting at his computer and leaves them there.  Later, I pick them up. It is a little game we play. Except Richard doesn't know that we are playing and also I have to pick up socks all the time, which I loath.

So one day, I decided to conduct an experiment.  What if I DIDN'T pick up his socks?  What would happen?  It was too intriguing an idea to let slip, so I carefully put my secret plan into action, and scheduled time to covertly NOT pick up his socks.  It was a complicated scheme.  One that required putting on the biggest glasses I could find.

It was so complex, in fact, that what with all the hullaballoo I forgot to document day one of my experiment!  Curse me and my forgetful ways!

Here we have The Space Under Richard's Desk: Day 3 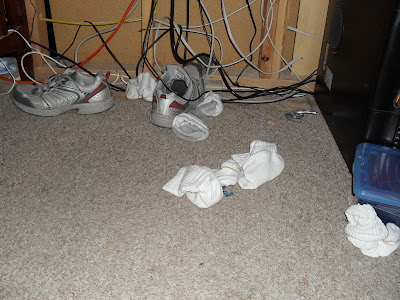 I'm assuming it is day three because there are 3 pairs of socks under there.  One for each day.  Are you following me?  The results thus far are exactly what was anticipated. 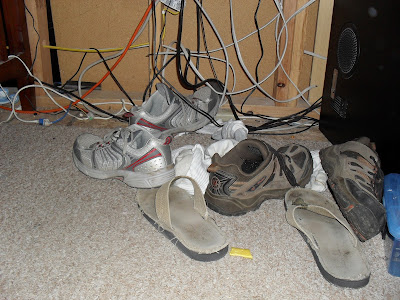 Very interesting.  There are a lot more shoes down there than I would have expected.  There are so many shoes that I can't even count all the socks, so we can only postulate that there is a pair for each day.   It looks like there is also a small piece of cheese under there, but don't worry, some mouse will find it.

Things in our little experiment got really very exciting after this, because I forgot all about it.  Nothing passes the time like total memory loss!

Several more days passed without a word from Richard.  I'm sure he had no idea what was transpiring beneath his desk, though he would have had to fish out shoes from there from time to time.  Things can get pretty darn messy around here before he even notices.  It is one of my favorite things about him.

But two weeks into our experiment he finally realized something was up.  From the kitchen I heard him exclaim  "I've got a sock farm growing under my desk!"    My response was "Wait, wait, wait, wait!  Don't touch it, don't touch it I've got to take a picture!"    And I snapped the following. 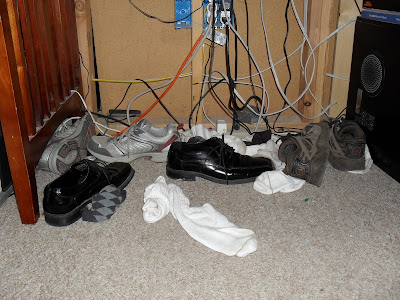 So.  Indeed. There we have it.  Left to its own devices the socks and shoes beneath Richard's desk will multiply until they reach critical mass (being in this instance 3 pairs of shoes and 12 socks), after which they will remain in a stasis wherein the number neither decreases or increases until acted upon by an outside force.

So, my top secret experiment was over.  The End.

I think Richard had really been about to pick up his socks when he noticed them under his desk, but I interrupted him at the pivotal moment, distracted him and then he forgot.   And so did I.  Then we left for fall break and didn't give the sock farm another thought, except to argue about why Richard didn't have any socks with him and whose fault it was (FYI - NOT MINE).

It wasn't until we got home that I realized that the experiment was far from over and all of my hypothesis had been so very, very wrong.  Beware.  What you are about to see may shock you.

The Deepest Abyss of Deskdom: Day 20 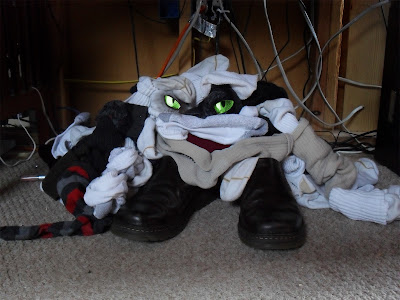 I was always afraid something like this would happen.  I always suspected my laundry was out to get me. But I never came up with a plan for what to do if the socks gain consciousness.   WHAT NOW?