A few months before Halloween I started thinking about what Harrison could dress up as.  I wanted to have him and Colin have coordinating costumes, because that is twice as fun. I gave it a fair amount of thought.  We could go easy and have him be Sheriff Woody, since we have most of the parts of that costume anyway.  Then Colin could dress up as Bullseye, ,the horse.  But one of Harrison's very favorite shows is Curious George, so then I thought of dressing Colin up like George the monkey, and Harrison up like the man in the yellow hat.  I thought he would like that.

Finally I decided to ask Harrison what he wanted to be.  I'm not sure why I didn't before.  Maybe I thought he might not understand?  I don't know, but one day I asked him what he wanted to dress up like for Halloween and his answer was:

Which I should have expected. He loves hot cocoa.  Wants to drink it in place of every meal, wants to carry it around in a bottle like a baby.  Asks for stories about it and wants me to sing him songs about it.  Of COURSE he wants to dress up like hot cocoa for Halloween.  But just to be sure I said "Do you want to be Woody, or the Man in the Yellow hat, or Hot Cocoa?"  And he said "Hot Cocoa!"  So I said OK.  Why not?

We got some foam at Joann's, wrapped it in felt, made a little handle the same way and voila. 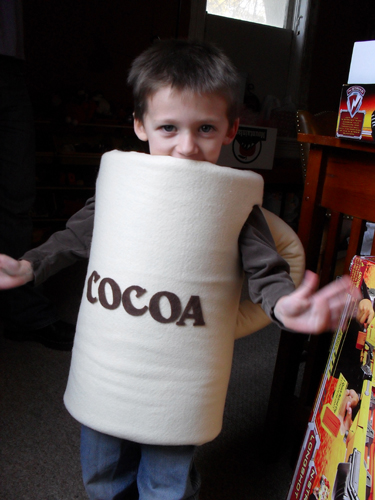 The cutest little cup of hot cocoa you've ever seen.
Then he walked around saying "Drink me!  Drink me!"  So I did. 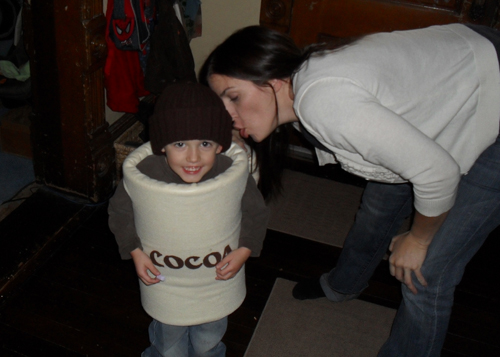 I decided Colin would make a pretty cute Captain Kirk.


So I bought a shirt pattern and yellow material and gold ric rac. 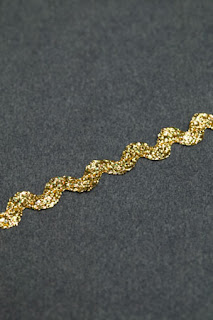 When I showed Richard the ric rac and said "Do you know what this is for?"  He said "Of Course!"

But then things went wrong.  The pattern was too big, which I knew when I bought it, but I thought I could pretty simply adjust it to make it fit Colin.  I had some problems though and ran out of material and would have had to buy new material and do more adjusting and I just ran out of desire.   So then I thought, "What could Colin be that would require almost no work on my part, that he has most of the stuff for already?"

And that led to this: 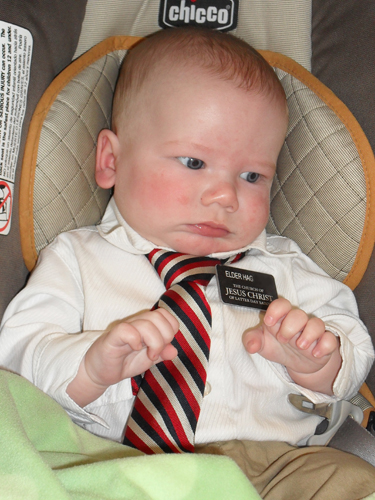 I made him a teeny tiny name tag and stuck it to his shirt and there you have it.  Who wouldn't want to hear the discussions from him?  He is irresistible! 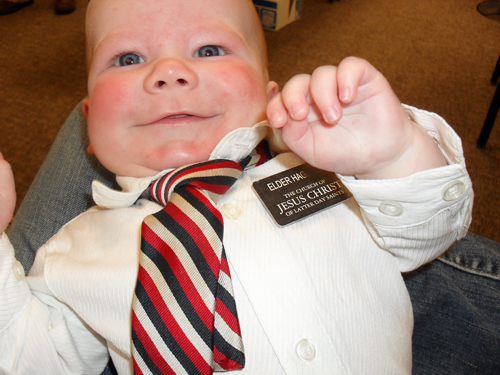