Cake Decorating for You!

I haven't wanted to share much about my cake decorating with ya'll, cuz i didn't want you to be like "WHAAAT?" and then I would be like "I KNOOW!" and you'd be like "DAAAANG!" You can see why i hesitated. But the new the blog policy (that's blogicy to you) is: if I experience it, YOU experience it" (which is going to make Burrito week really fun) so lets look at a cake, shall we?

Last summer, i watched a whole lot of "Amazing wedding Cakes". and being married to my husband, who is the Do-It-Yourselfingest guy i've ever met, i decided I wanted to try to make a pretty cake all by myself. And since I am so impatient, I decided to make a 3 Teir cake. Cuz, why not? And my sister Demi had a bridal shower coming up, which would be the perfect excuse to make such a cake, so with seredipity on my side, i got cookin.

I just did the cakes from a mix to save time, though I have since looked for and tried out a few cake recipes from scratch, with varying levels of success. I made two mixes since I was making three tiers, and it took forever since I didn't have enough pans to cook it all at once. I was working on those silly cakes until midnight.

I let them cool overnight and officially started frosting the cakes the next morning. Applying frosting is very similar to applying spackle, but without the benefit of sanding afterward. Not only that, but sanded walls are usually still covered with texture to hide the imperfections. No such luck for me. I did a few layers of frosting, (including a crumb coating), but I just couldn't get it any smoother than this. Not bad for Cake #1 I suppose. I still had no idea how I was going to decorate it at this point (clearly a common problem for me) but i decided to just take it one thing at a time. Or rather, just 4 or 5 things at a time. Whatever. 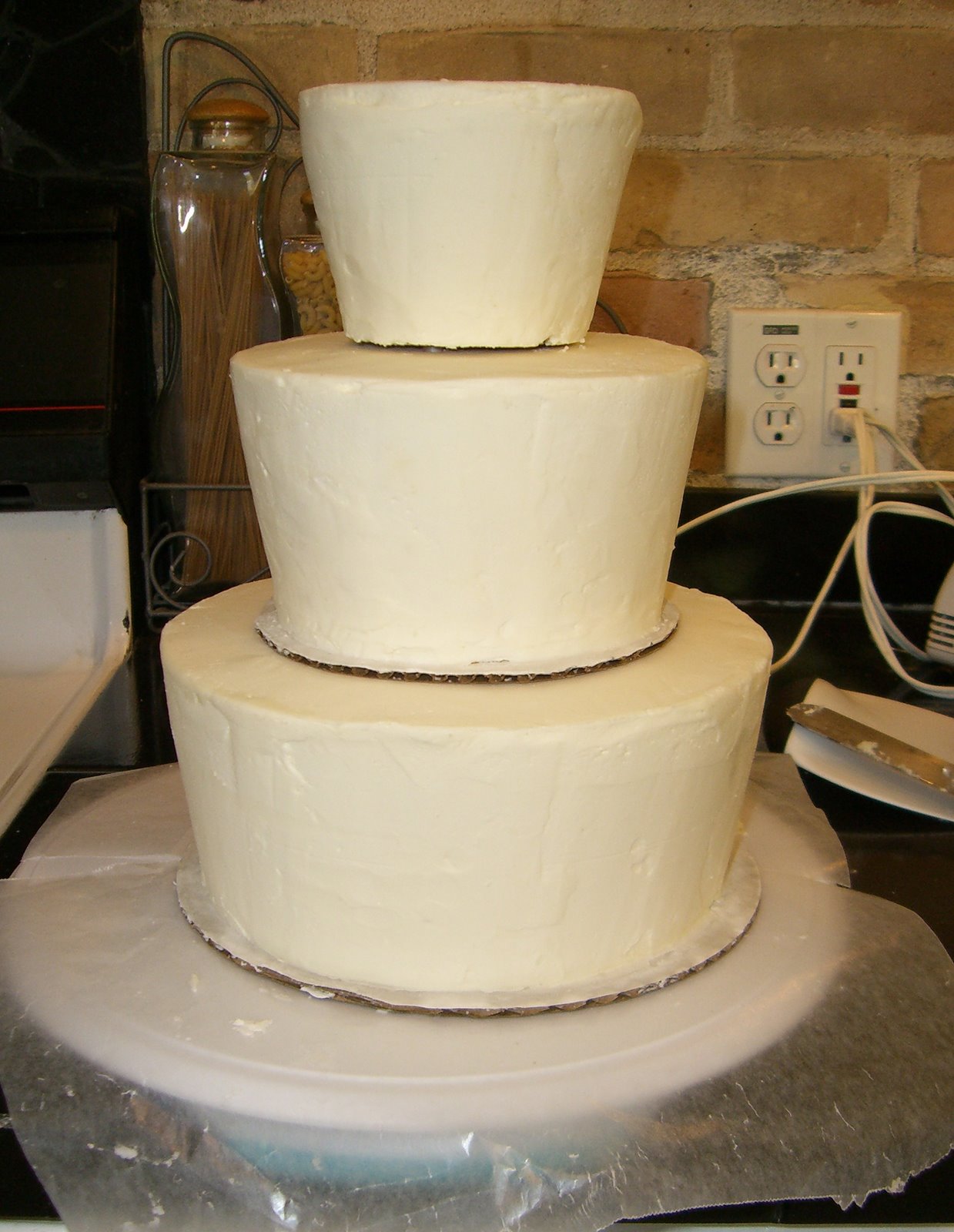 I carved each layer so that it was a little bigger on the top than on the bottom, just to see if I could. Then I stuck 4 straws in each of the lower tiers to be used as supports for the tiers above - so the cake itself wasn't supporting all the weight. Then I stuck a wooden dowel through the entire cake once it was assembled to keep the tiers in place. 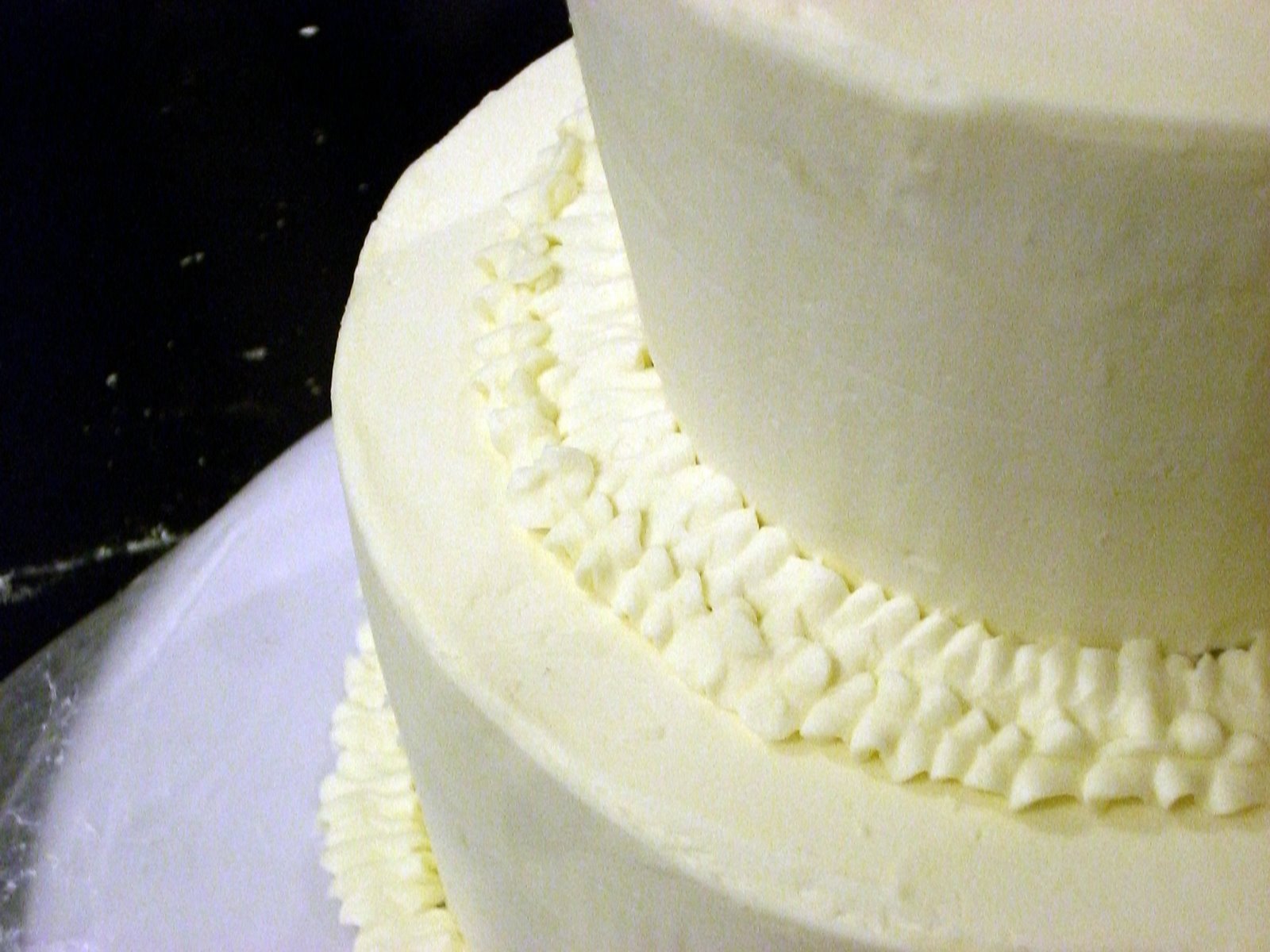 And then appeared this lovely ruffle. Things like this always seem to show up on my cakes. I beveled my cake, but forgot to trim my cardboard circle so I had to add a bunch of frosting to cover it up. Something about it reminds me of a very fancy Lei.

So, I wrapped each tier with a ribbon, (This would have worked so much better if the layer WASN'T beveled.) and not knowing what else to do I secured the ribbon with a strait pin. And thus was born the most excited of all shower games "Pins In the Cake"! And with an autumn theme for her wedding, I went to Joann's and found some autumny colored what-not and stuck it on the cake. And that was it. I just had to carry it on my lap all the way to the Bombay house. Transporting cakes is still something of a mystery to me. 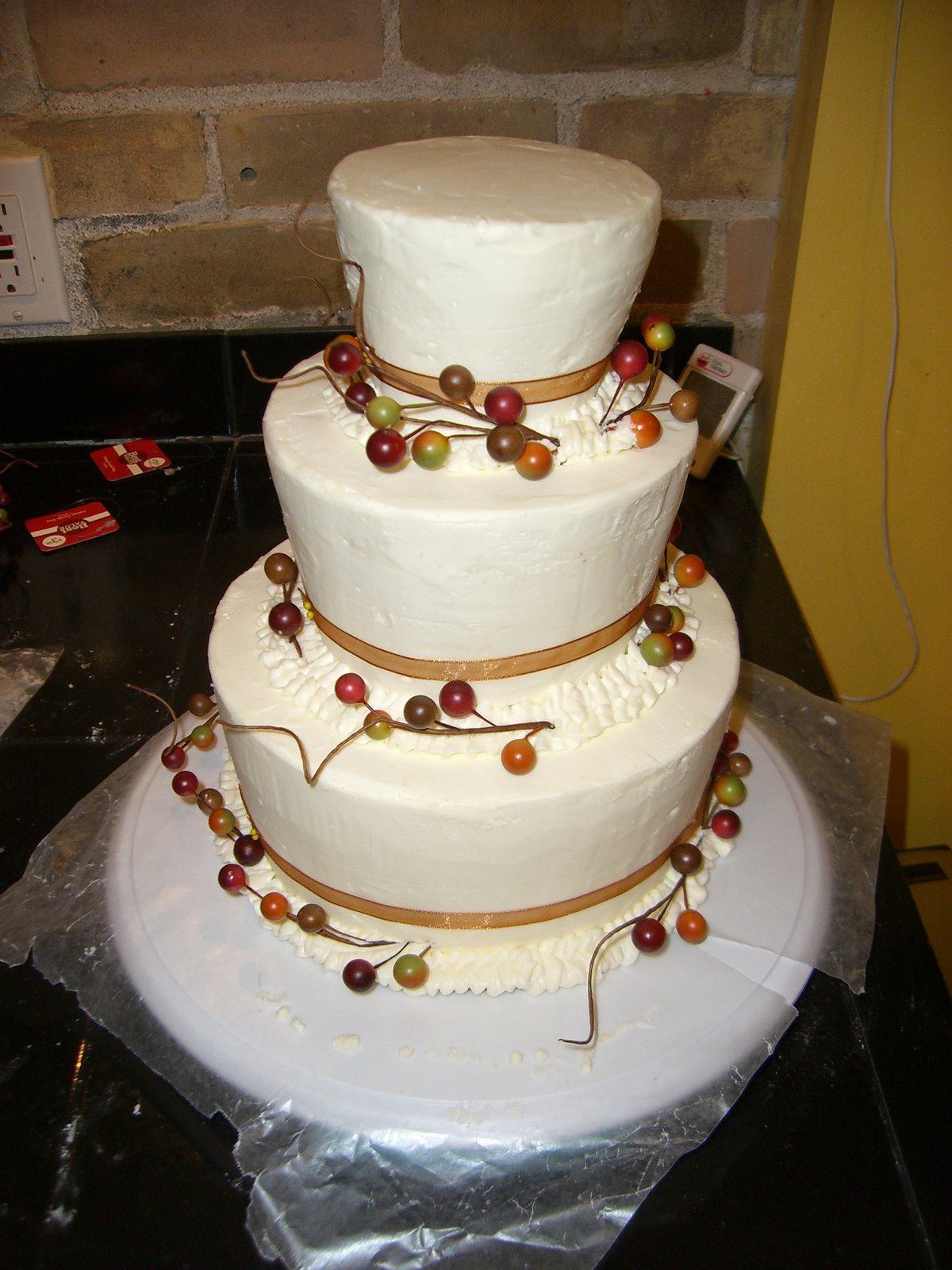 Ya know, it kinda looks like a really fancy hat. How awesome would it be to wear a hat like that? Though it would be even better to wear a hat that was really cake. Nothing passes the time in a long business meeting like covertly nibbling on your hat. And I'm sure this look is more than appropriate for all your business meeting attire. Cake goes with everything!
Labels: Cakes Food