In Regards to Books and What-Not

Today the Provo Library held the Children's Book Festival. Or Children's Literary Shindig, or Carnival celebrating the Written Word for Youngins or something like that. I could look it up I guess, but what good would that do us?

So I went, primarily because a friend of mine just had a book published, thusly: 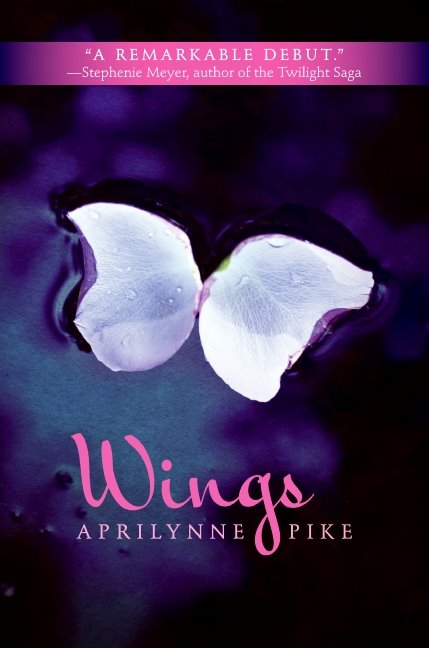 and she was there doing a book signing. And after looking at the list of other authors who would be there, I also grabbed my mom's copy of Princess Academy to get it signed as well. 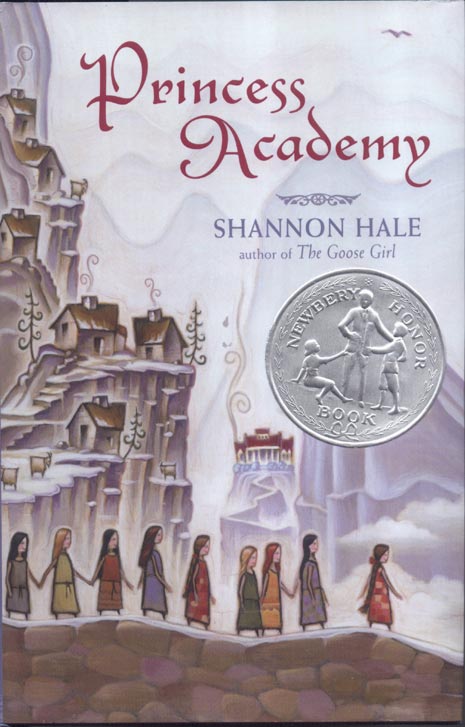 When we got there and I saw that Brandon Sanderson was there too I cursed myself for not bringing Elantris and ran down to the little bookstore and got myself a copy of Mistborn, which I haven't read yet, but want to. 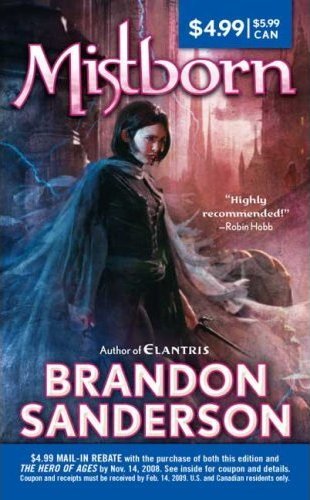 Boy, aren't these pictures helpful? You were probably reading along thinking "What is she TALKING about?" but then I stick that spiffy little picture in and all your questions are gone. That is why they say a picture is worth a thousand words, you know. or rather, up to 1000 words. And I'm only allotted 2000 words per post, so I am really saving space!

(By the way, the word on the street is that Mistborn is the reason that Brandon Sanderson was chosen to finish the Wheel of Time series, so that is pretty cool.)

So we had Aprilynne sign our books after waiting in line for a while (Now don't let the "we" at this point confuse you. I went with some friends that I haven't mentioned before now is all.) Then I got in line and had Brandon Sanderson sign my book. He asked if I wanted it personalized, so I asked him to write "To my very best friend in the whole world", which he did. I know many of you often sit around in those quiet moments wondering who Mr. Sanderson's best friend is. Well wonder no more!! IT'S ME!. Look. 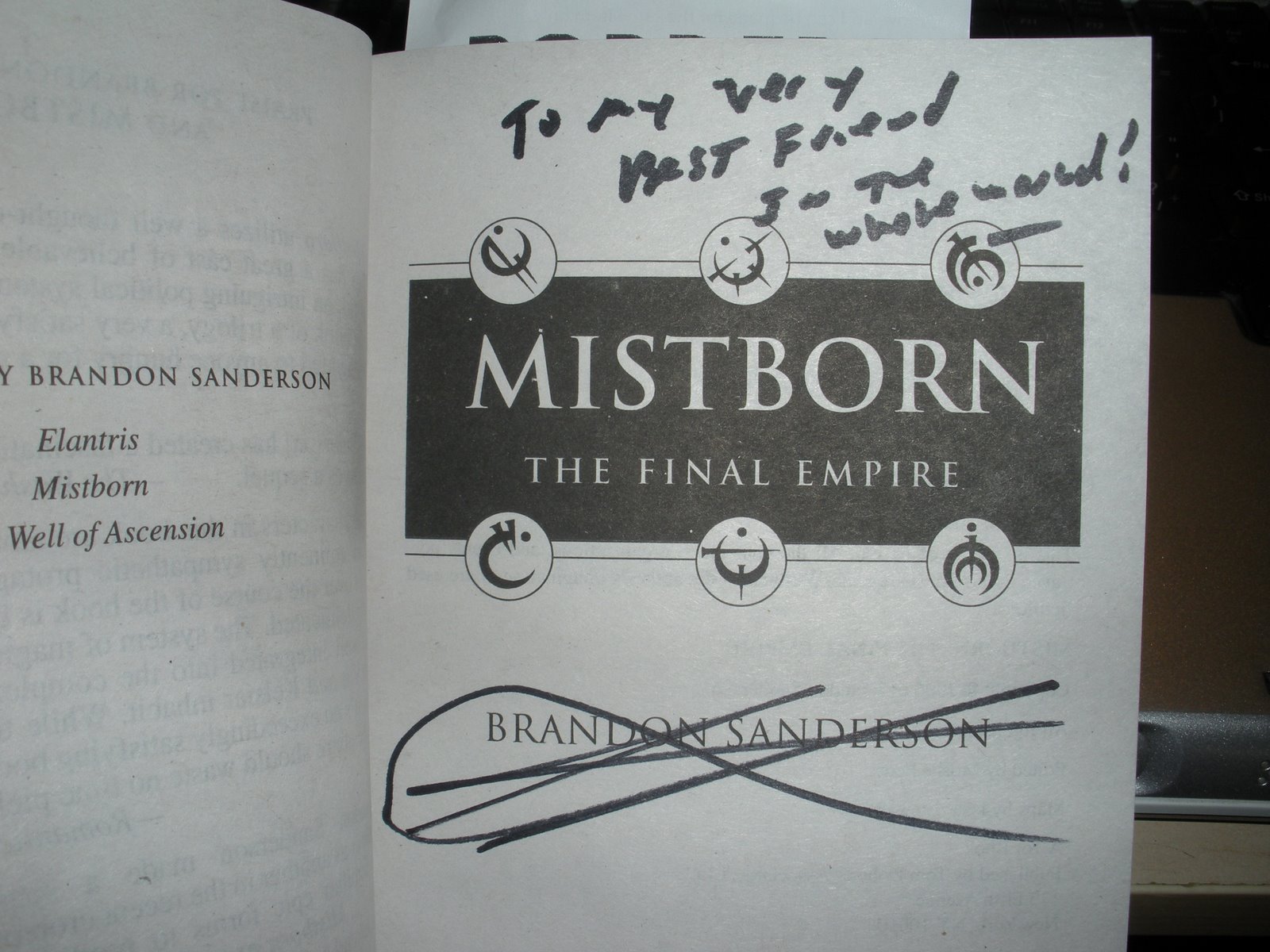 Irrefutable proof, that's what that is.

And so then I waited in line half an hour to get Princess Academy Signed by Shannon Hale. I borrowed it from my mom at least 3 years ago and I thought it might be a nice little surprise to return it to her signed by the author. So she opened it up to sign it and what did she find? 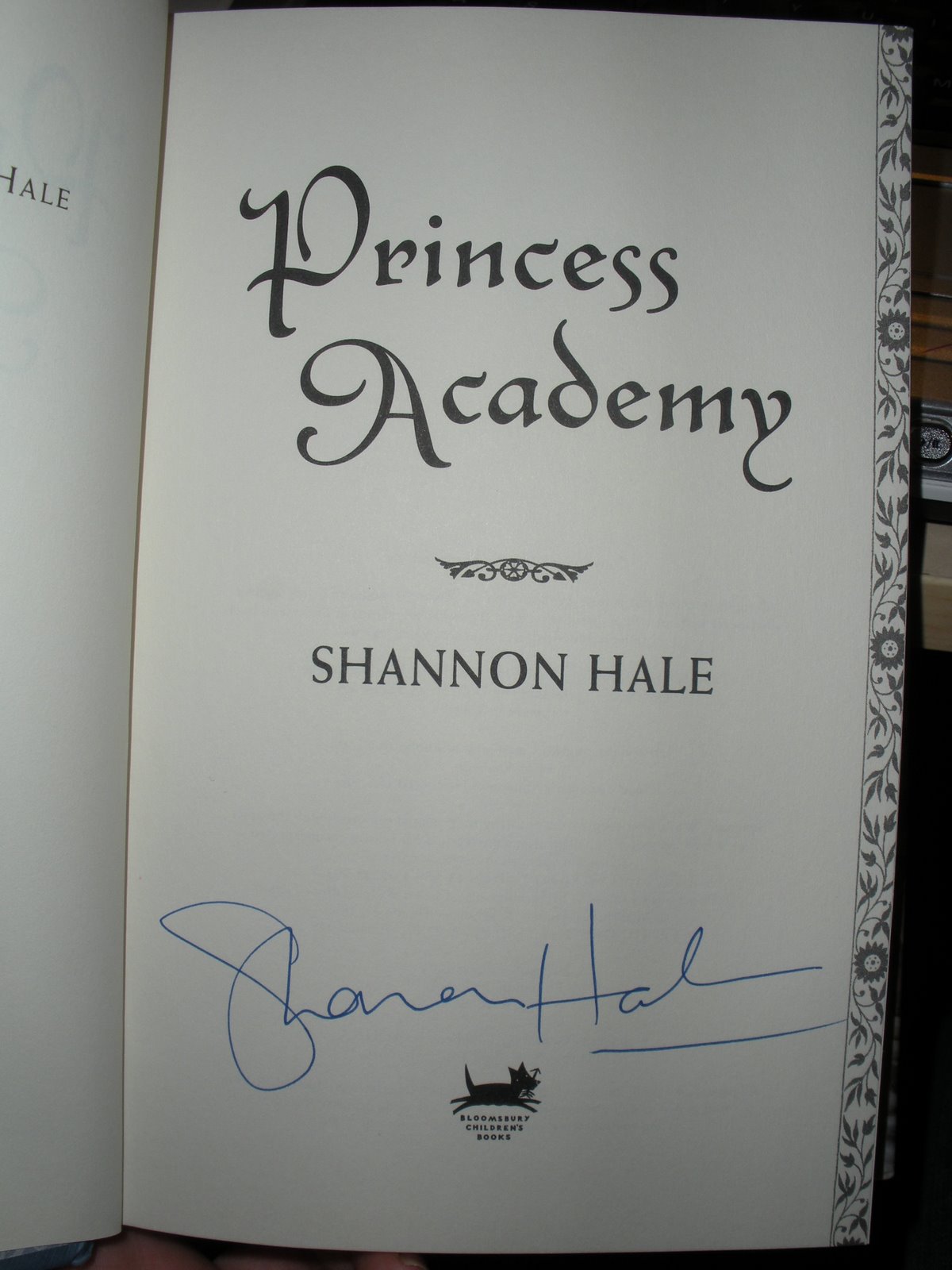 I said to her, "Uh, is that your signature?"
She said, "Yeah. This is a first edition. You could probably get a hundred bucks for this on ebay."
so I said "Oh, great idea. I think I will." And walked off.

Good times. I can only imagine what she was thinking. Wondering about the poor simple minded girl who wandered around and waited in lines to get books signed that already had signatures in them. Maybe I was like that in Highschool too, just asking the same football player to sign my yearbook over and over. I could have been like that for all I know. I don't remember so good.

So, uh... yep! That is the end. Books are fun and reading is swell! And oh my goodness I just remembered I am speaking in church tomorrow. Gotta go!
Labels: Thoughts