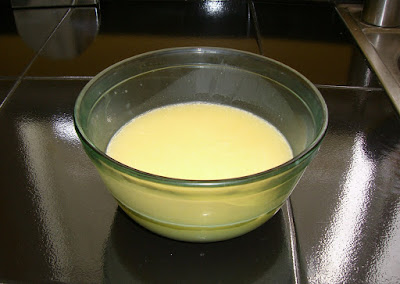 What you see here appears to be a regular bowl of pudding. But it ain't. This pudding is shrouded in mystery. Let me tell you why...

The other day I was rearranging stuff in my fridge to make room for a cake I had just made. I was going to have to clear off a whole shelf, but luckily my grocery shopping is more wishful thinking than anything else, so there is always room. I noticed, in the front of one of the shelves, a bowl of vanilla pudding. My first thought was 'When did Richard make that?' My second thought was 'Why would he make pudding when he knows I am making cake?' Then I closed the fridge and forgot all about it.

Later that evening, I came down from putting Harrison to bed, and Richard said "When did you make pudding?" to which I responded "I didn't make that pudding! I thought you made it!" Then we just stared at each other in freakish silence as we had one of those If-you-didn't-do-it,-and-I-didn't-do-it,-then-where-did-it-come-from? moments.

I have come up with 2 possible explanations.

1. A Ghost made it. We are being haunted, possibly by the spirit of the Lady who owned the house before us, and instead of rattling chains in the attic she has taken to leaving desserts in the Kitchen. It really seems like the best possible way to be haunted, now that I think about it. I wonder if she does Chocolate Chip Cookies?

2. Someone broke into our house. Some desperate robber broke and entered with a plan to rob us blind, but when he saw the state of things inside, he felt so bad for us he decided to leave us a little treat instead. That was really pretty nice of him. And he didn't break anything, so no hard feelings.

Anyway, we found the pudding on Saturday. Now it is Tuesday. We don't quite dare to eat it, since we don't know where it came from, but at the same time we also don't dare to throw it away. So it just sits in our fridge. I think part of me is waiting to see if it will vanish as mysteriously as it appeared. How long do you think I'll have to wait?
Labels: Food