It is time for a mission story. So sit back and get comfortable. Cuz you know how I can ramble. I just hope Sister Thomas doesn't kill me. She was my trainer. This story takes place on an Autumn Morning in New Hampshire. I had been out about a month (if that). It was the morning of District Meeting, and our District Leader, Elder Edwards had called and talked to Sister Thomas. He told her that they were out of consecrated oil and needed her to make some more for them. All she needed to do was melt down some Crisco in a pan on the stove and bring it with us to District Meeting. She is very helpful and reliable and she said she would happily do that for them.

I didn't know anything about this. We were done with our morning study, and I was in the bathroom doing my hair or makeup or whatever. Sister Thomas was bustling around getting everything ready for District Meeting. Suddenly, I heard Sister Thomas Scream. I ran to the kitchen and saw a pot on the stove with flames reaching at least three feet in the air. We grabbed some baking soda and put out the fire, but the room was already full of smoke, and then the building's Fire Alarms went off.

We filed out of the building with everyone else. Lots of people panicked when they saw the smoke and ran for it. We didn't try to stop them. What would we have said? Our main thought was, "How are we going to explain this to the Fire Men?" They cleared the building, made sure the fire was contained, and in the mean time the EMT checked our lungs for smoke and asked us what happened. I really don't remember what we told them. But I am pretty sure they walked away from there thinking: "Those girls sure were dummies!"

We were a bit late to district meeting. When we told them what happened Elder Edward's companion (whose name I can't remember right now) had to run out of the room because he was laughing so hard. We agreed that there was no harm done (except to the hood on the stove. That would need to be replaced) so we all had a good laugh and we thought that was that.

Except that that wasn't that, because when our Zone Leader called that night to make sure we were OK, he told us that he was pretty mad at Elder Edward's little joke. Joke? we said. What Joke? What ever are you talking about? Only then did we learn that consecrated oil is made from Pure Olive Oil. Nothing else. Elder Edwards had gotten this idea from a story one of the member's told about her mission, (except of course in her story nothing caught on fire) and thought it would be great fun to see if he could trick us.

Sister Thomas got a fair amount of slack for this story, since she is the one that did the actual Crisco melting, but I'm sure if he had asked me, I would have done the same. I mean, when your district leader asks for a favor, you don't expect it to be a trap, right? 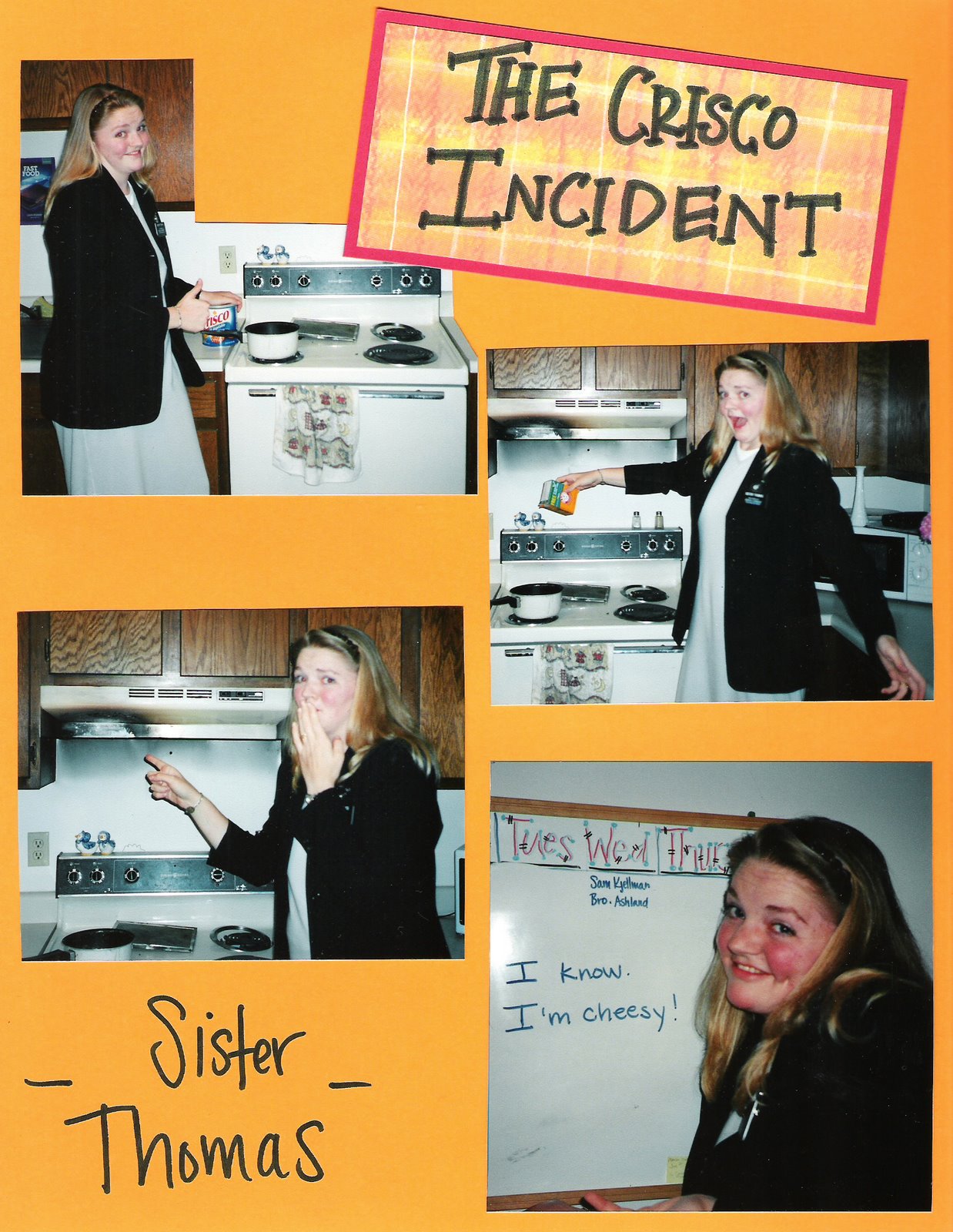 And yes, my scrapbooking skills are extraordinary. This is Sister Thomas' remarkably accurate reinactment.

So, Flashback lesson learned? "I always expect everything to be a trap. Which is why I'm still alive."
Labels: Thoughts