Ah Valentine's Day.  The National Holiday of Obligatory Love.  The Celebration of Pink and Doilies.  The day that isn't complete until someone ends up in tears.

Ours began on Monday night, making valentines for Harrison to take to school with him.  I had wanted to make them for family home evening, but it didn't work out.  We had to wait until the kids were asleep because Colin nearly has a seizure if he can see candy that he is not allowed to eat.  We decided to make those Rolos dressed up to look like Dynamite which you can see here.  They are so cute in such a manly way! There are 17 kids in Harrison's class though, and 3 Rolos per kid at $0.89 a piece would have been like $100 dollars, so we used Smarties instead.  Not as tasty, but good enough for kids.

Richard and I watched Castle, and put them together:  rolled the smarties in red construction paper, then taped 3 together using black electrical tape and stuck some black electrical wire in the top for the fuse.  It really is such a cute idea.  Until I actually looked at our pile of valentines. 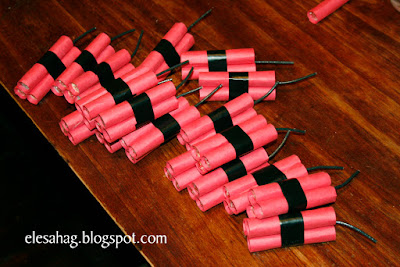 And I suddenly realized I was sending my 5 year to school with a backpack full of explosives.  I could just see him being tackled by school security.  Or at the very least me getting a concerned email  from his teacher.

So we stuck little tags on top - Harrison insisted they say "Kaboom" - and suddenly, they were cute again. 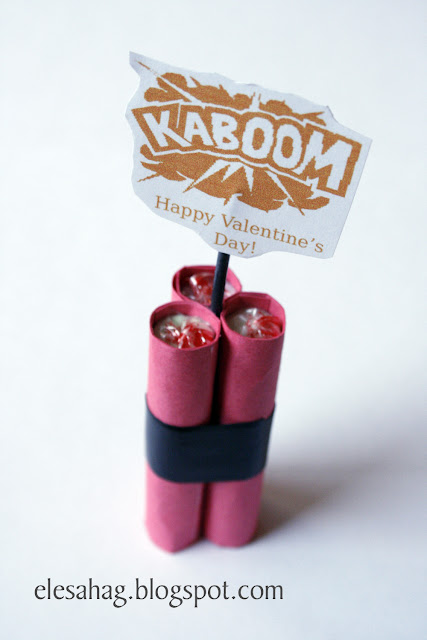 The "Kaboom" was made using the Sound FX font which you can download for free here.  Or you can use the tags that I made and not have to do any work: 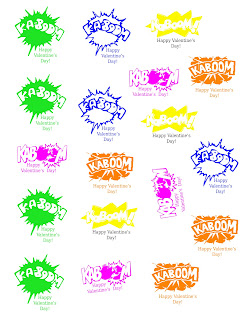 Click on the picture to make it full size, then save and print on card stock.

So, Valentines for school? Check.

The next phase of Operation: Valentine's Day! came at dinner time.  I made Tacos Al Pastor because it is one of Richard's favorite's.   Since I'm sharing junk, I might as well share that recipe with you too, because it is seriously delicious. 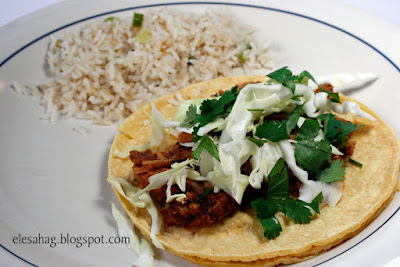 Tacos Al Pastor
(adapted from We Cook Here)
1/4 Yellow Onion, chopped
1/4 cup crushed pineapple
1/4 cup orange juice
2 Tbsp vinegar
1/2 Tbsp chili powder
3 cloves garlic
1 tsp coarse salt
1/2 tsp Oregano
1/2 tsp Cumin
1 lb Pork Roast
Put the Roast in a crockpot.  Puree remaining ingredients in blender.  Pour the sauce over the roast and cook for 7-9 hours on low.
When it is time to eat, heat up corn tortillas in the microwave until they are warm and very soft (30 seconds or more).  Then put the meat in the tortillas and top with cabbage, chopped onion, and cilantro.  My husband uses 2 tortillas at a time, cuz that is how they serve it at his favorite Mexican restaurant.

Then I made some sweet rice, which I adapted from a recipe I found on Recipezaar.  Which I have just learned is now Food.com.


Sweet Rice
1/2 Tbsp olive oil (or butter, or whatever)
4 green onions, sliced
6 or so Sprigs of fresh Cilantro, chopped (just use the leaves)
1 cup Instant Rice
1 cup chicken broth
2 Tbsp white sugar
Warm the oil in a frying pan.  Saute the onion for a few minutes, then add the chopped cilantro and saute a minute more.
Add the rice, cooking and stirring until it is light brown.  In a microwave safe bowl, combine the chicken broth and sugar until the sugar dissolves, then add the rice.
Cover and microwave according to the package directions (about 5-6 minutes).  Let rice sit 5 minutes until all liquid is absorbed, then fluff and eat.  (You can also do this last part in a sauce pan on the stove top if you are that sort of person.)


I also recommend eating this meal with THESE Black Beans cuz they are goood.
We also had some Sprite with Raspberry Sherbet to drink and candles to set the mood, so dinner was a complete success.   Harrison thought it was so fun to be so fancy at home, and pretend like we were at a "Real Restaurant!"

But the fun didn't stop there!  If you knew how much I sucked as a mom sometimes, you'd, . . . well. . . never mind.  It is none of your business.  But today I decided to stop sucking and come up with some kind of Valentine's Day activity and I found just the thing at Serving Pink Lemonade.  And so we had ourselves a little Valentine's Day Treasure Hunt! 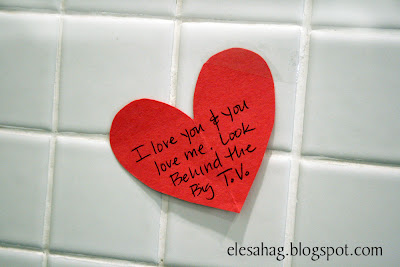 I used all of her clues, cuz why mess with genius?  Here they are, for your convenience.


Do you believe in magic wishes?
Head to the place that cleans your dishes.
Now I know that you're no fool,
This is where your drinks keep cool.
Maybe you have super powers
The next clue will be where Dad takes his showers.
Are you having fun with all these clues?
Look in a place that we keep shoes.
And then had to come up with some clues of my own, which aren't really clues so much as a little poem that tells you where to look:


I think you are getting cuter.
Look behind Daddy's computer
This heart is a pretty red.
Look under a tall, black bed
You're I.Q. is getting higher.
Check the place that holds the fire.
Valentine's is very groovy.
Look inside where we keep movies.
You're so smart it isn't fair.
Go look under Mommy's chair.
At the end was hidden some Hershey's Kisses, and Megamind on DVD, which we sat down and watched right then.

And Harrison loved it!  It was really too easy for him, but he still had so much fun running around and finding hearts.  I might just make this a Valentine's Day Tradition.

So, instead of waiting for hours to get seated in a restaurant on Valentine's day, and the stress of finding a babysitter on the one night when the rest of the world wants one too, we stayed at home and had Valentine's Day with our kids and it was perfect.  I really couldn't have asked for any more from the day.  Except, you know, to win 2nd prize in a Beauty Contest and collect $10.00.
Labels: Food How To's & DIY's