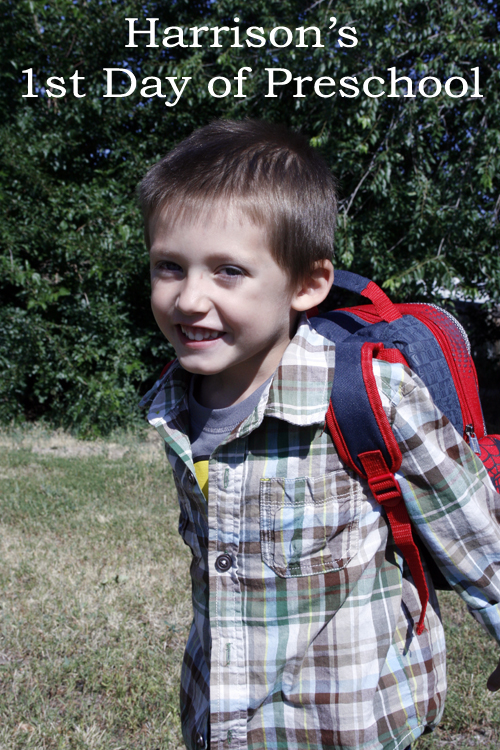 And Colin ate lots of hotdogs. 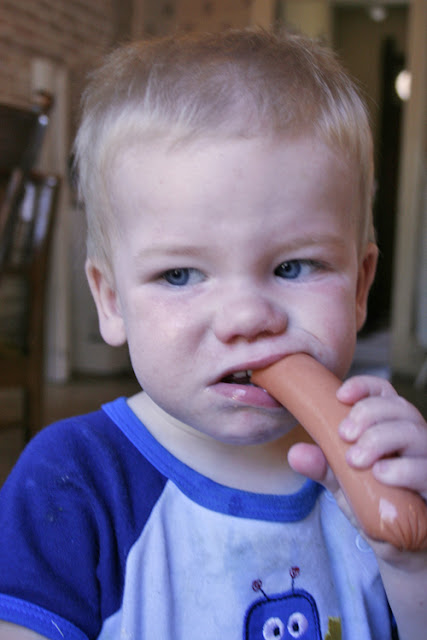 And he got very good at feeding himself with a fork.  He really is amazing at it. 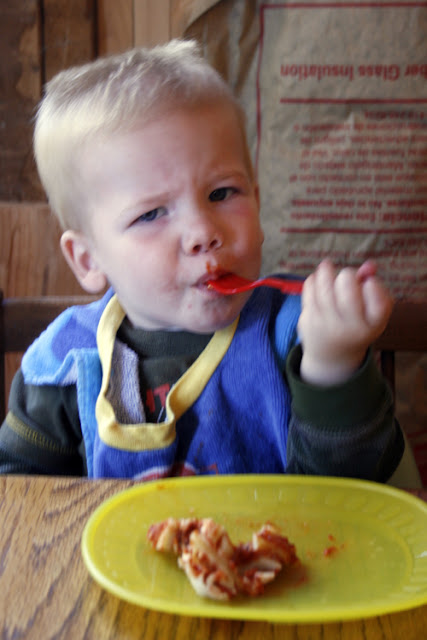 He likes to eat just about anything, but he LOVES vegetables.  They are always the first thing gone on his plate.  He'll eat all his veggies and ask for more (in sign language) before even touching anything else.  Not until ALL the veggies are gone will he finally eat everything else.  He can finish almost a whole can of green beans in one sitting, all by himself.

The NEXT big thing to happen was Harrison getting his new Backpack. 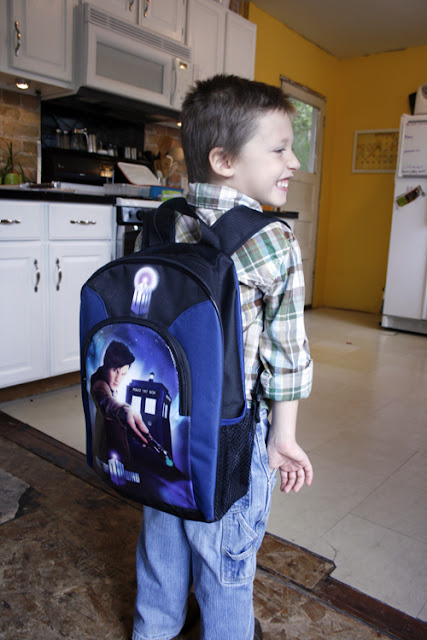 He loves Doctor Who, and was so excited when his backpack came and couldn't wait to wear it to school.  He said, "When all my friends see it, they'll say 'Yea!'".

With Harrison's new backpack, that meant that Colin got Harrison's old one. He will wear it for hours. 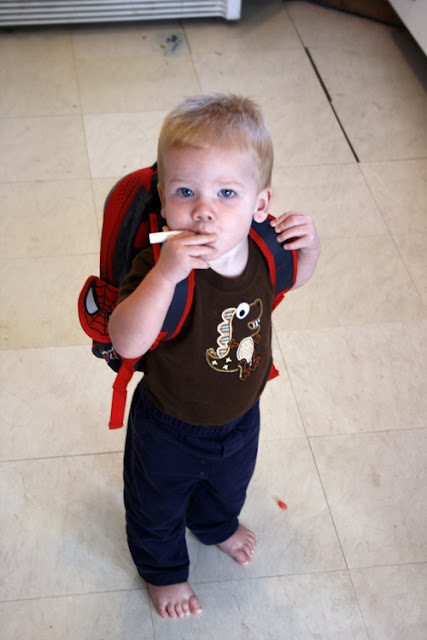 Harrison likes Doctor Who so much he had me make him a TARDIS out of Legos. 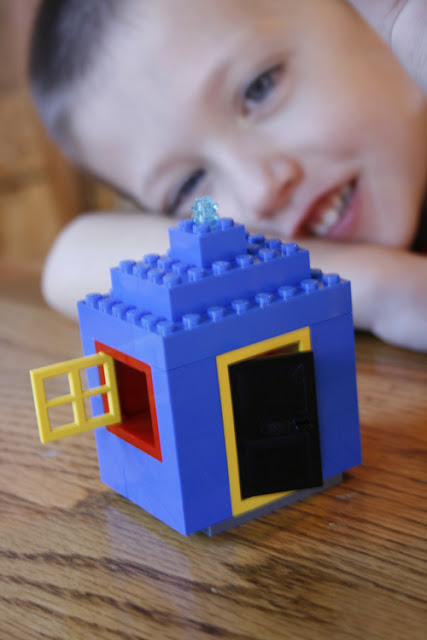 Here is the Doctor, standing on top, just like he always does in the show. 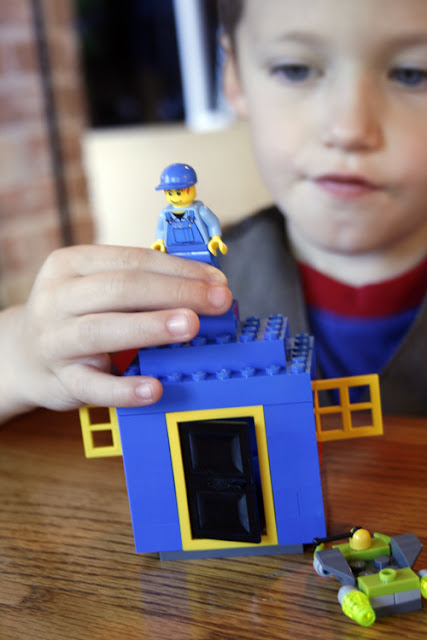 On September 14th I took some pictures for somebody.  Harrison and his cousin Sydney wanted in on all the picture taking, so I ended up with several of them.  Colin is now my child who won't hold still for a picture, so photos of him are pretty rare these days. 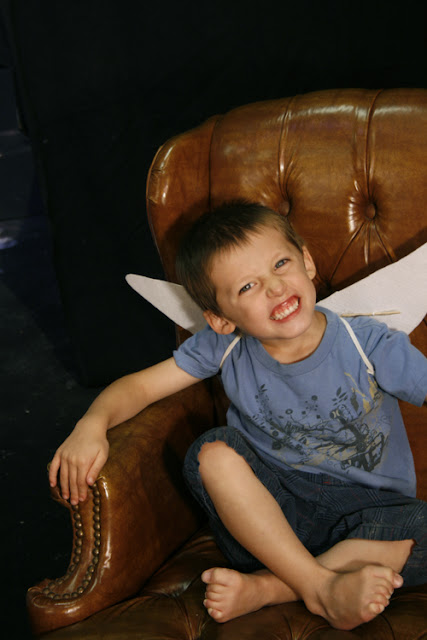 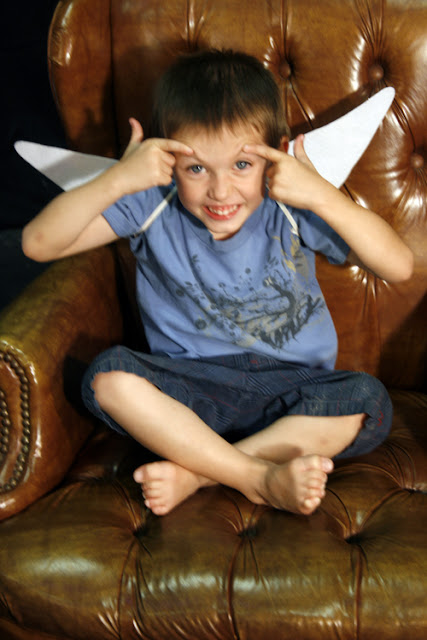 I don't know what he is doing in that picture.  I guess he wanted to have his eyebrows raised?  And when I told him and Sydney "You're a tiger!"  this is what I got: 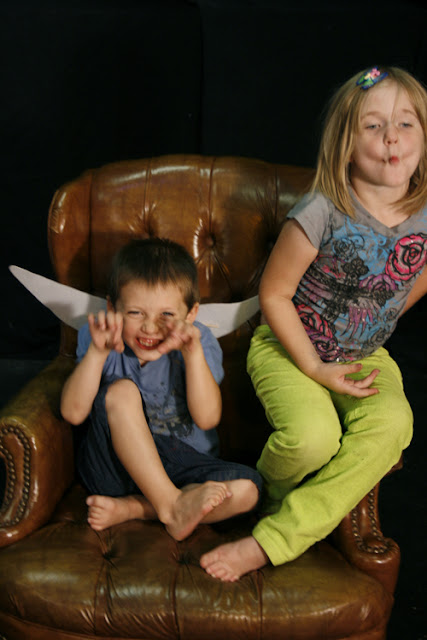 Then Sydney and Harrison tried to pose nicely together: 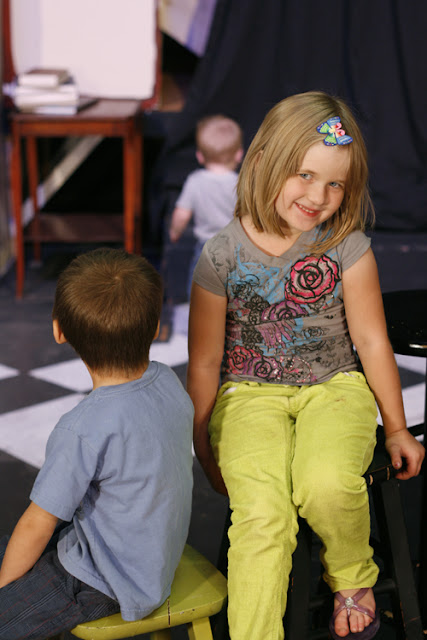 Sydney is a pro.  She thought maybe putting her arm around Harrison would help. 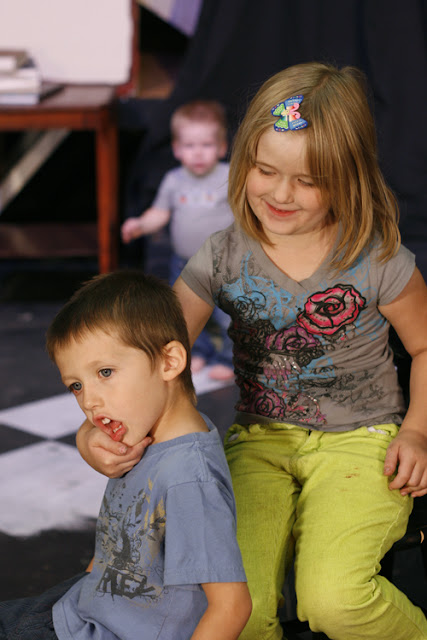 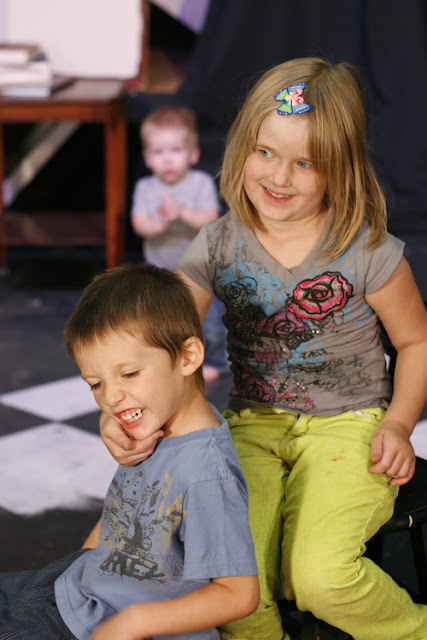 Here are Harrison and Colin waiting together for Harrison's school bus to come. 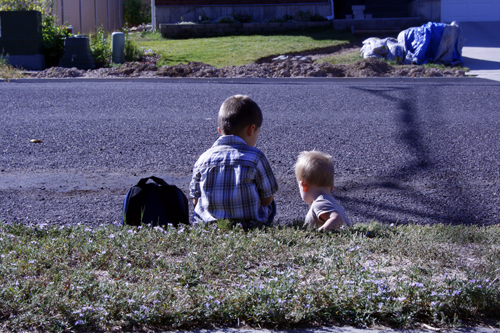 Later that day they had a parade!  And then sat down for a jam session. 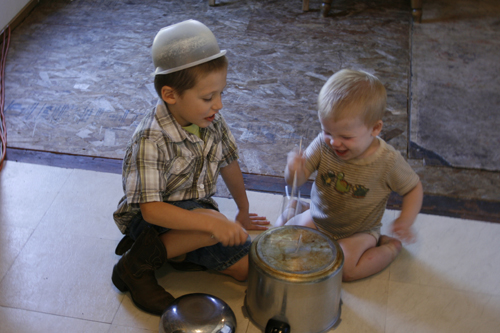 In October Harrison drew some big 'ol pictures to hang on the windows.  He said he wrote his name on this one, but when I told him it said "Ho Ho Ho" he laughed and laughed. 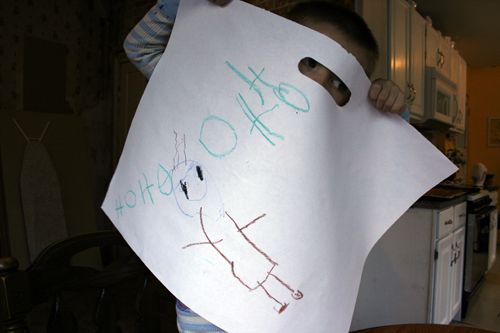 He was so proud of this next one.  With good reason: 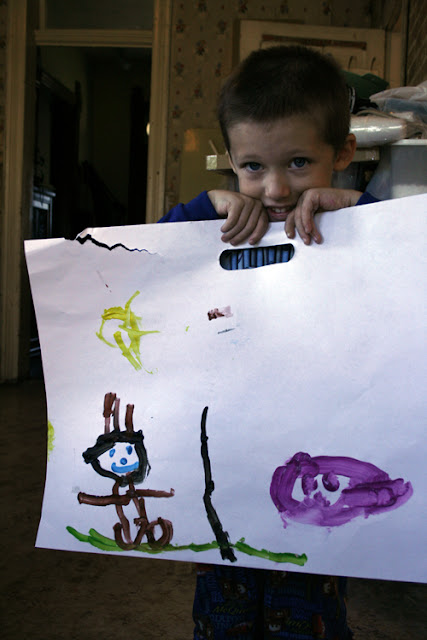 He pointed out to me him, and the sun and grass and a tree, and see that purple thing over there on the right?  He said that is his old head.  At least we know where it is now.

As Halloween got closer, we all got excited: 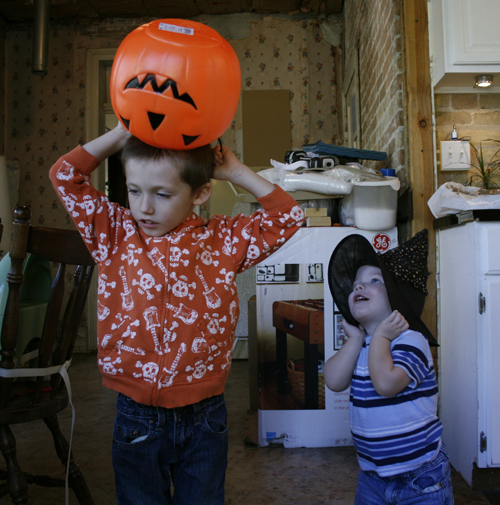 Until finally it was time to dress up! Here is Harrison/Sheriff Woody with some of his cousins 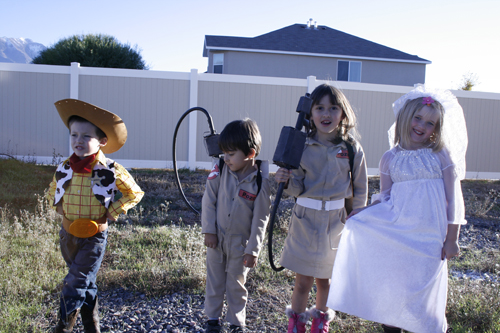 And this year we managed to turn Colin into Captain Kirk. 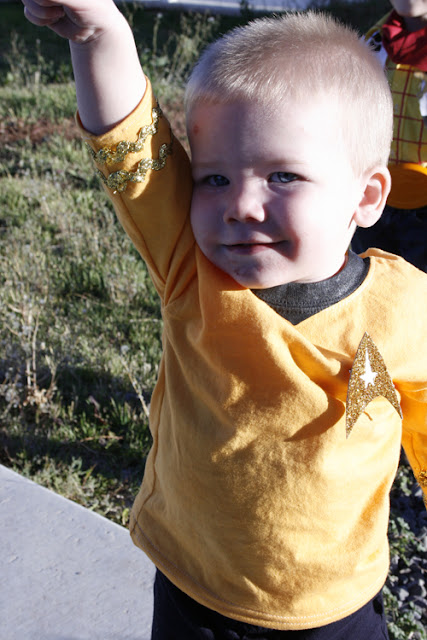 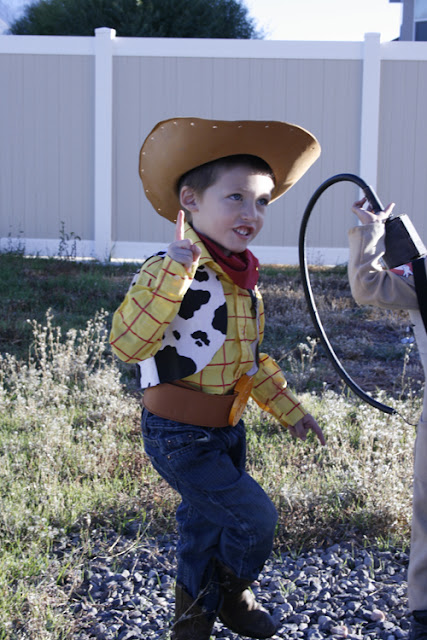 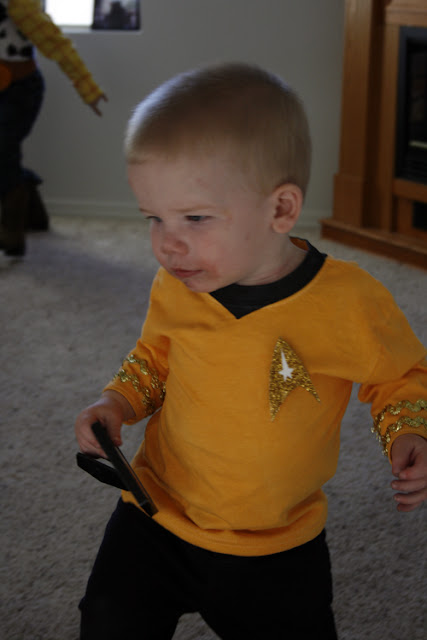 We went Trick-or-Treating near Grandma's house. Which was Hilarious.  Colin would walk up and smack the front door, saying "Uh!" and when they opened the door, Harrison would shout "TRICK OR TREEEEAT!" as loud as he could. 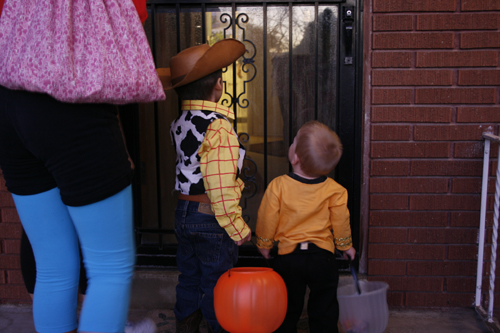 We had a great time, though Colin couldn't figure out why he couldn't just eat his candy already.

All in all, a great Halloween.  I wonder what they will decide to be next year?
Labels: Costumes Family