I know, I know.  Post overload.  I wrote about 3 posts in the past year, and now suddenly I am popping them one right after another.  And while they may not be technically "good", or "disease-free" it is nice to be writing again.  My little Colin is almost 1 year old and I suddenly feel like I can breathe again.  And think again.  I don't know when the last time is I did that.   Also, I am trying to weed out all those lazy followers who are only following me because it is easy.  It is easy to read everything by someone who never writes anything.  But someone who writes a bunch of stuff you don't care about, those are the people you have to have real dedication to follow.  That is my goal.  To be so boring that people only keep reading me out of sheer force of will.  I can do it.  I know I can.

Ok, subject change.  My best friend Marion gave me THIS for my birthday. 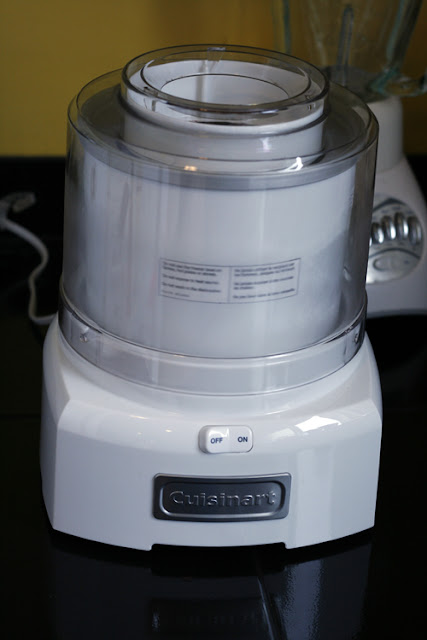 It is a little, countertop icecream maker.  I'm not even sure she knows how crazy we are about homemade icecream.  We got two of those gallon sized, electric icecream makers for our wedding, and we kept both, and usually use them both at the same time.  We make a lot of icecream.  But those things are so big that we always feel like we have to wait for a family function to make it, because it just makes so much.  Yes, we could make less, but the fuller you fill it, the better your icecream turns out (something about less air making creamier ice cream or some other ice cream-science-hogwash).

So the beauty of this one is not just that it sits all little and cute on the countertop, and requires no ice or salt, but it only makes 1.5 quarts, which is more than enough for our little family.  (it is a proven fact--discovered in a study I did on myself--that a person eats less homemade icecream than they do store-bought ice cream.)

Anyway, even though we have made so much icecream through the years, we really haven't tried that many different flavors. We are even the proud owners of The Ben & Jerry's Homemade Ice Cream Recipe book, and we have only made 3 flavors out of it.  Not just because Richard is a flavor woosy,  but also because I have been perfectly satisfied to stick with what works.

But, new icecream maker = new lease on life, so last night we decided to give chocolate icecream a go.  With a counter top icecream maker like this you have to make sure your canister is frozen all the way and that your ingredients are all very nicely chilled.  So here is the recipe - adapted from Ben & Jerry.  (If I have adapted the recipe, does that mean I am not breaking any copyright laws?)


1. Melt the chocolate over low heat.  Gradually stir in 1 cup half & half and stir until smooth.  Remove from heat and let cool.
2. Whisk the eggs until light and fluffy, 1 to 2 minutes.  Slowly add the sugar, whisking until completely blended.  Mix in the rest of the half & half, vanilla and salt.
3. Mix chocolate into egg mixture and blend.  Cover and refrigerate until cold, 1 to 3 hours.
4. Transfer the mixture to an ice cream maker and freeze following the manufacturer's instructions.


And that is it.  The recipe normally calls for a mixture of heavy whipping cream and milk, but Richard doesn't like the taste or greasiness of whipping cream, so we just use half and half across the board.

So now the important part, the part that will change your life.  You need to know that I didn't have any baking chocolate, so I used cocoa powder.  There are always directions on the cocoa powder box for how to substitute it for baking chocolate - you just mix it with some oil - so that is what I did.  Which means I skipped the melting and cooling steps and it took a whole lot less time.    However, when I added my chocolate to the rest of my ingredients it WOULD NOT fully mix in. It looked like cream mixed with tiny chocolate shavings.

This was very annoying, but we figured that it probably wouldn't taste that gross so we didn't give up yet.  We chilled it for a while to make sure it was plenty cold and then I threw it in the mixer.  This little mixer only takes 15 to 20 minutes and when I peeked at it at 10 minutes I was completed surprised to see that it had transformed from chocolate shavings into chocolate icecream.  Somehow it finally all mixed together.  I left it in for a full 30 minutes to make sure it was good and frozen (though i really don't think it made any difference) and then scooped it out into bowls. 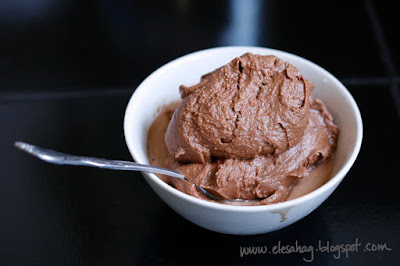 hmm.  I would like to make it clear at this point that that is not a picture of a bowl of poop.  Again - Not Poop!  My poop doesn't look like that anyway, but I think it is time to change the subject.  I put the rest of the ice cream in a tupperware container and stuck it in the freezer to harden some more.

And then we ate it! 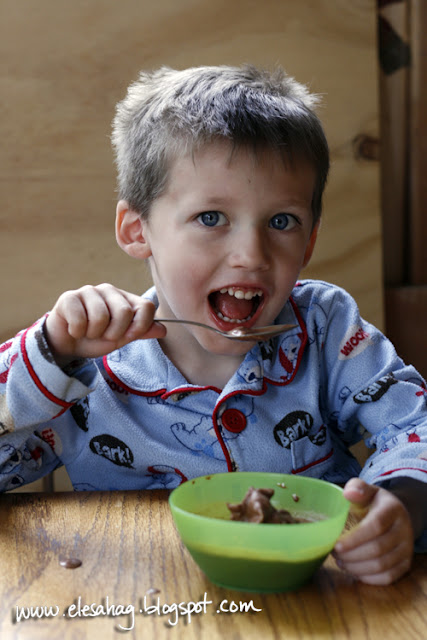 Yep, that is Harrison in his jimmy jams.  It was 10:00 in the morning.  It is never too early for icecream!

And by the way, after being in the freezer for about 3 hours it was beautiful, and very easy to scoop.  After about 6 or 7 hours I had to let it sit out on the counter for about 15 minutes before I could scoop it.  It doesn't really store that great, so it is best to plan to eat it all in a day.

Oh Yeah.  The Raw Eggs.   Ben and Jerry's recipe book came out in 1987, which must have been before they had even discovered salmonella.  So most their recipes call for eggs that never get cooked.  Apparently, this makes some people nervous.  Not me.  I eat enough raw cookie dough to run a salmonella factory.   There are options though.  I think egg substitutes would work just fine, or you could actually cook the eggs.  Like so:

Beat the eggs and sugar.  Heat milk on medium low, stirring frequently until it starts to steam and bubbles just start to form on the edges.  (You are NOT boiling the milk)  Very slowly add the milk to egg mixture stirring frequently so that the eggs heat up but don't scramble, then carefully cook over low heat until you reach 160 degrees. Chill, then add your cream- THEN use the ice cream maker


So, yeah, totally doable, but  a whole lot more work.  So you'll have to ask yourself if it is worth it.  Frankly, using Raw Eggs just makes Ice Cream a tiny bit dangerous, and I like that.