The Grass is Always Greener When it is Actually Grass

I mowed the lawn today.  Or, rather, I mowed the breeding ground for weeds and misery that is conveniently located right outside my front door. I think everyone should have such a breeding ground within walking distance.  But the city made me cut mine!  I got a letter from the Police Department saying that: my yard was an eyesore, I'm a lousy landscaper, and am probably bad at math.  And if I don't do something about the above problems within one week, they will send their rabid secretaries after me.
I personally think that mowing the lawn should be the man's job.  Because I like to only do things that showcase and emphasize my feminity, and lawn-mowing does not do that.  Even mowing in 5 inch heels didn't help.  It just made me feel stupid.  But the fact is Richard has enough other things to do on Saturdays, and here I was with a gorgeous day.  Why not?
First though, I had to get the lawnmower started. And I did NOT want to be starting it out in the front yard where my neighbors and random kids on bicycles could see me. I can't think of anything more embarrassing than the convulsions I have to go through to get the mower started the first time. Except maybe square dancing.  So I pushed the mower all the way around behind the house and by some miracle, and after putting gas into it, I actually got it started.
So I pushed it back around and got to work.  Though I honestly don't know what the city was making such a big deal about.  I really don't think it had gotten all that tall. 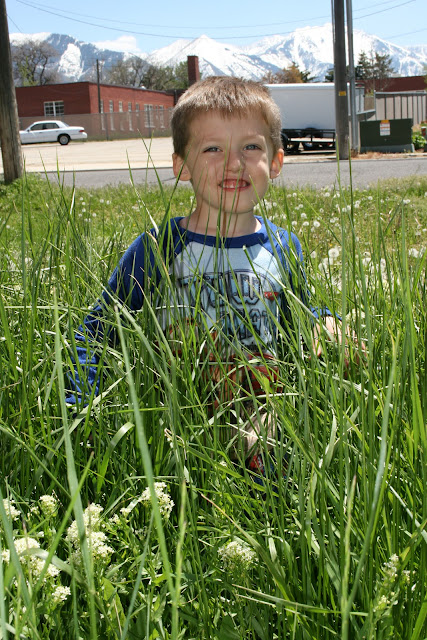 Harrison, meanwhile, was furious.  Apparently the weeds are his friends.  He kept telling me to put them back, leave his guys alone, and shaking his fists at me. I just kept mowing though.  I take letters from the police department very seriously.  But it was no day at the beach, believe me.  Our weeds are so juicy that the lawnmower stopped about every 3 minutes because the place where the cuttings shoot out was so clogged the blade couldn't spin any more.  The weeds just piled up in there like Orc bodies at the gates of Minas Tirith.
My front yard is not that big, but after a couple of hours I  was getting pretty tired.  And the lawnmower just kept quitting every 3 to 5 minutes and I started telling myself that as soon as I couldn't get it to start back up on the first try I was just going to stop for the day.  So, of course, it started right up, every single time, though I could barely summon the energy to pull the string at all.  Even my sissy little girl pulls were enough to start it up.  Pretty darn good little yard-sale lawn mower.  I mean, it was smoking pretty seriously by the end, but I made it.  I cut the whole thing.  And I looked a little like a sea monster, I was so covered with green.  And my high heels were totally ruined.
So now comes the one month stretch of summer where my yard almost looks like grass.  And the nice thing about weeds is that we probably won't have to cut them again this year.  I'm really surprised more people don't go this route.  Even if you can't walk on it in your bare feet.
So, Good-bye weeds.  You will me missed, but not by me. 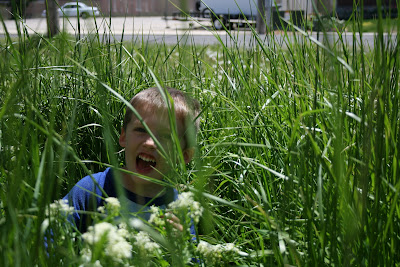 Don't worry.  There is a whole back yard for him to play in, and the chances of that getting cut are about 1 in 8, so he'll be just fine.
Labels: Thoughts