Being Big is the Best

Ok, it is time to catch up.  I am not doing a good job of keeping this updated.  It just seems to be so hard for me to find the time to do it.  blah blah, excuses excuses.   So let's see....

Harrison started school.  Here he is on his first day of his second year of Preschool (9/8/10). 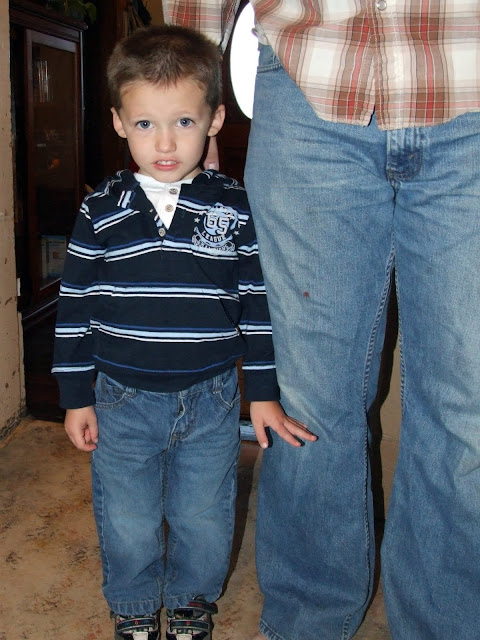 Doesn't he look excited?  Actually, I think he was, just not excited about the picture part.

He and daddy watched out the window, waiting for the bus to get here.  I'm really happy to share this picture so you can see our rice paper blinds and how Harrison has mangled them. 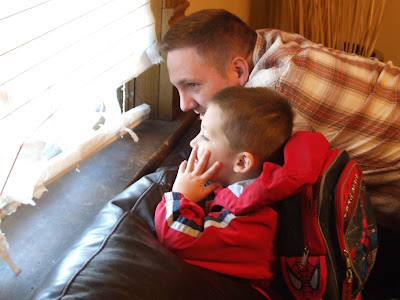 He goes just twice a week and seems to love the bus ride.  I don't know how he feels about the rest of it.  Today he told me he played with toys at school, so that is something.

And also, I would like to announce that my big boy is

Potty Trained!
Mostly.  95%, I would say.  It has been a rather long process, but it only makes sense that it would be.  It is a whole lot to change and learn.   But bit by bit he has figure it out.  He woke up dry for about a week straight, so we just stopped putting diapers on him at night.  No accidents yet.  Which is amazing to me, since I don't think I figured that out until I was a lot older that him (which is probably more than you wanted to know about me).  Then I thought he might never poop in his potty, but eventually he did that too.  He peed in his potty once and a few minutes later he said he had to go potty again and he pooped in his toilet and now he does it every time.     I was ecstatic.  So then we were just faced with the challenge of using the toilet away from home.  Which was pretty darn tricky.  I pushed it a lot at first and then realized that that tactic DOES NOT work with him so I just started putting pullups on him every time we left the house and really didn't push it at all.  Mostly he just held it whenever we left the house, as long as we weren't gone too long.   But eventually he got to where he was willing to use the big toilets, and THEN one day in the car he insisted he had to go potty RIGHT THEN.  So we pulled over and he peed right there on the side of the freeway.  I knew we had made it then.  Pretty soon I stopped putting pullups on him when we left the house and he has done great.  Wants to pee on the side of the road all the time, but so far we haven't had to again.

The only thing left is school.  He hasn't used the toilet at school yet, as far as I know.  It is a small one, and he doesn't really need help, but still.  I'm not there to tell or ask help from.  So I just send him in a pullup.  Maybe one day we will go over early and I will show him the potty there, make sure he knows how to use it?  That would probably be a good idea.    Cuz I'm sure it doesn't help overall to have 5 hours a week when he doesn't have to use the toilet.

Ok, now that I have beaten that subject to death (I kind of forgot that this wasn't my journal I was writing in.) I can say Happy Autumn!  I will post again tomorrow.  I promise!
Labels: Family