Gardening and Other Things No One Cares About

Recently we visited with some of Richard's family in Nevada and his aunt told me she has been reading my blog. I was touched. Then she said "You are a very interesting person." Which I am not at all sure was a compliment. But really, can I blame her? Based on what I have written, what else could she think?

A few years ago I made a clock for my dad. He was always wishing out loud for a great big clock you could see all over the house. So my darling husband and I decided to make him one. I bought a clock mechanism and hands on ebay and got to work. I'm pretty sure the design was Richard's idea. Something square and manly. We took a piece of plywood and covered it with some small sheets of copper that came from who knows where (my house is full of crap of unknown origin), and then I very carefully measured out a circle and added rivets for my minutes and hours. Perfect!

See anything wrong with it? (It really is kind of cool in person. I think.) 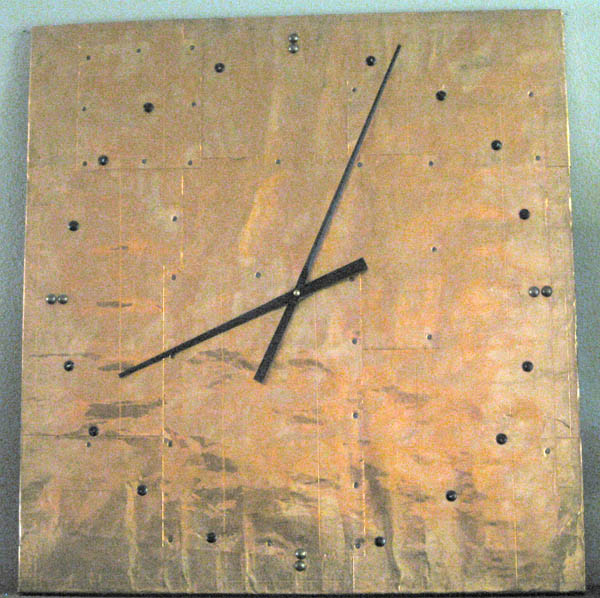 Neither did I. Not for a long time. In my defense, nobody else did either, until it was hung on the wall. Until we actually tried to tell time with it. Can you tell what time the picture was taken?

So now it is a big ol' joke. It is still hanging on my parents wall, and people are always saying "I can't tell time on that thing!" Which just makes me laugh and laugh. It's not like I rushed headlong into my project without giving it any thought (though it was Christmas Eve when I made it). I thought carefully, counted carefully and executed my plan carefully. I was just wrong. Very, very wrong, and there is a great big, hard-to-read clock on my parents wall reminding the world of that fact.

Boy I sure learned my lesson!

This year I planted a garden. My very first. It is so very fun and exciting. I made several plans and then found a book on Square Foot Gardening, fell desperately in love with it, adjusted my plans just a little and started building. I built a box that would sit above ground to fill with top notch soil. We have lots of spare lumber, so I grabbed some 2x8's and carefully measured and cut them and made myself a box that is 2 feet wide and 14 feet long. All on my own. I was pretty pleased with myself. Until Richard and I started laying out the grid (which is the Square Foot Gardening way) and realized that something was wrong. My grid was not working out. I finally measured it all again and found that the front is 14 feet wide, but the back is 14 feet 2 inches. I am such an amazing genius. How do I always do stuff like that? I measured. Then I cut one so it would be the same length as the other. And yet here I am. My rhombus garden a testament to my idiocy.

So now, the one person I was most excited to show my garden to, the one who would have been the most interested in it, is the one person who can never be allowed to see it. My Dad. Things being out of square give him hives under the best of circumstances. This might give him a heart attack. Cuz it was already full of soil when I realized my mistake, and Richard convinced me it wasn't worth it to try to fix. So we just fudged the grid to sort look straight and left it at that.