The last weekend in March we went out to Nevada to see Richard's grandmother. Richard's parents were there as well, along with an aunt and some cousins who live next door.

It was great. Harrison got to spend time with his second cousins who he was ready to follow just about anywhere. They had this little motorized jeep that I didn't think Harrison would like at all. Whenever we go to Chuck E. Cheese he would get out of the rides if we started them. He only liked them if they were standing still. So I didn't think he would go anywhere in this jeep at all. But he climbed in, and Connor cliimbed in next to him and took off and Harrison was thrilled! He grinned as he hung on and never wanted it to stop.

Here is Harrison with Connor, doing some very nice posing for me: 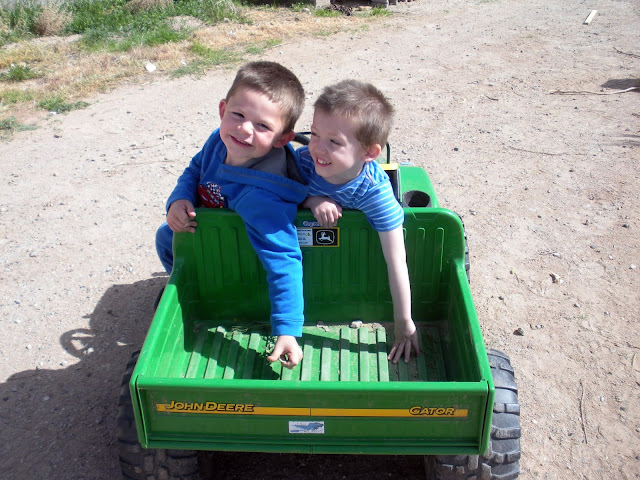 After a while Connor wanted to teach Harrison how to drive. Harrison couldn't figure out that he had to hold the gas pedal down so it just lurched forward it short little spurts. And over everything I could hear Connor shouting "Steer! Steer! You have to steer!" Watching a 4 year old teach a 3 year old how to drive was so funny I almost fell down.
Labels: Family