A few years ago I started to realize that in almost every nativity scene, Mary and Joseph are just looking down on Jesus in his manger. Gazing adoringly at him from afar the same as everyone else. And it started to bug me. Why wasn’t Mary holding Jesus? It is nice that they are worshipping him and everything, but he was just born! Why isn't she holding him? What mother would lay her brand new baby down in the hay and then just stand around with all her visitors and farm animals just looking at him? Ok, it really doesn't sound THAT weird, especially if he was asleep. But if they were going to be getting their pictures taken then OF COURSE she would pick him up.

This seemed so glaringly obvious to me, that I began a quest to search for, and ultimately buy, any nativity set I saw where Jesus was being held. They were rare, but I always managed to find a couple. However, in the last couple of years they seem to be everywhere. It has gotten to the point where I can no longer buy every one I see. I think I saw about 9 at one store alone last year. So I’ve decided to just buy one a year. This make me happy. My collection is growing but my husband doesn’t have to take up a paper route just to fund my crèche obsession.

And I found this nativity a couple of weeks ago, instantly fell in love with it and bought it. 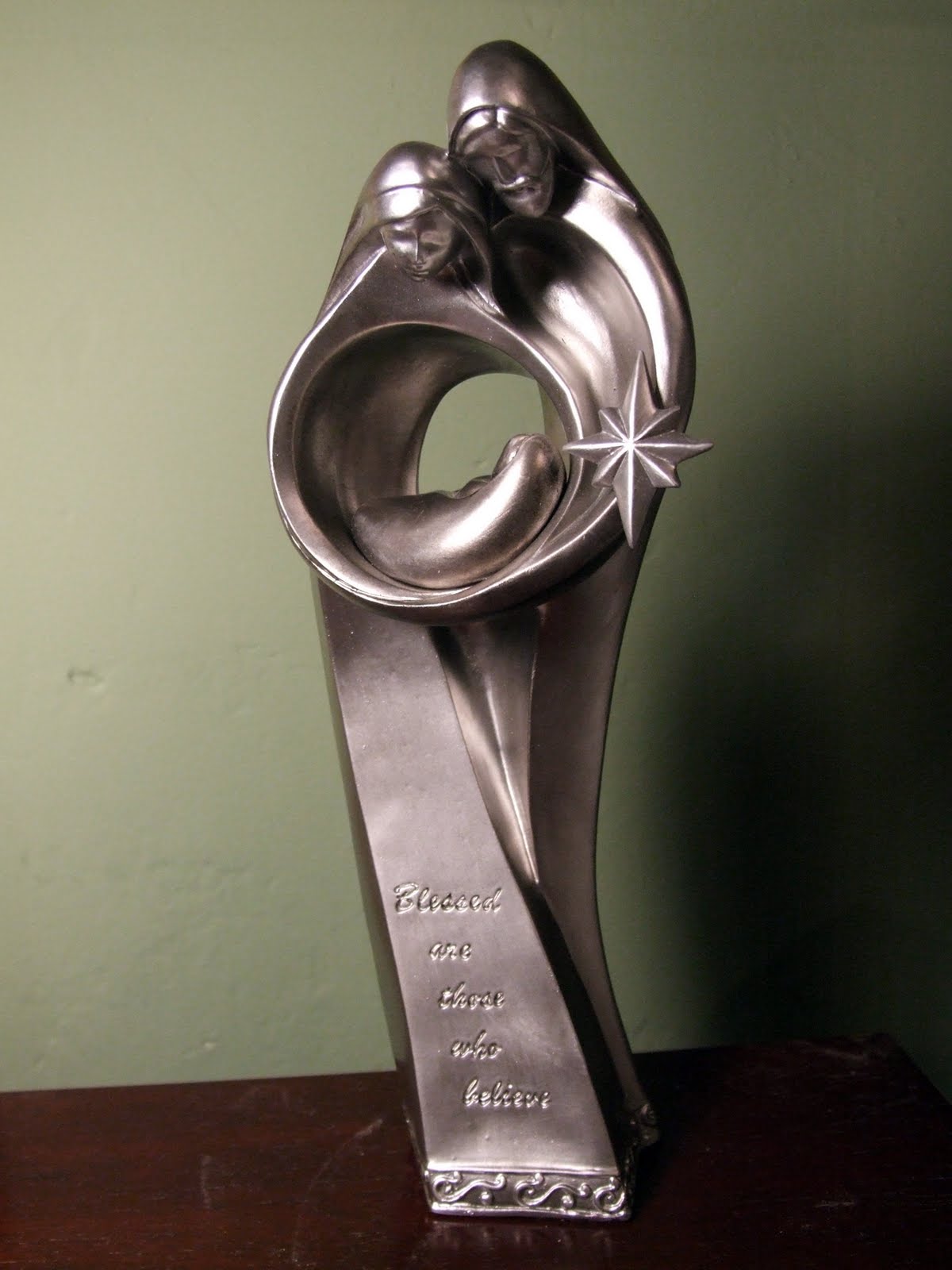 When my husband got home from work, I excitedly showed it to him (because, like any man, if there is one thing he is interested in it is Christmas Decorations) and said, “Look what I bought!” And he said “Last year?” I said, “What? No, I JUST bought this.” He said, “You bought that last year.” Baffled and exasperated I said “WHAT?” He said “That is the one you bought last year.” Understanding finally dawned and I said “No…. wait, really? No, it isn’t. Is it? No it’s not!” And then Richard explained to me how last year, at the same time, I had excitedly shown him this very figurine, and it was now wrapped up with the Christmas stuff in the attic.

Well he is never wrong. I got this one at the Hospital gift shop, and suddenly could almost remember buying the last one at the Hospital gift shop too. Gee, it almost sounds like my holidays are spent in selfless service visiting the sick and afflicted. I wish that were true. I actually don’t remember why I was there, though I am sure that I WAS there. Yeah, obviously I have some memory problems.

So the other day, just to solidify my fuzzy thoughts, I climbed up into the attic and pulled out the Christmas stuff. And lo, what did I find but no nativity like this one. Not even one that was very similar. There was a white one that was about the same size and I am guessing that was the one he was thinking of, but I can't believe he so totally convinced me! It's like he planted the memory of me buying it twice in my mind with his words. Darn him and his Jedi mind tricks! What else has he convinced me of?
Labels: Thoughts