We are pleased to announce that our Guest Interpreter today will be none other than Lance, my Brother-n-Law! Take it away, Lance! 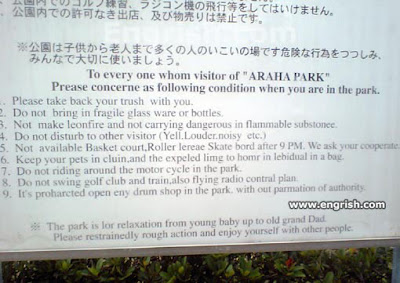 There has been some confusion regarding the use of Araha Park lately. Obviously, "Prease Concerne" is a condition that people are contracting after they enter the park. I know that this is unsettling for some people, but using the park has its consequences, people! Ok, Let's discuss each rule just to make sure that we all understand what is expected of us:


Ok, finally: this park was built, and is intended, for us to find refuge and relaxation away from young babies and old people. You must restrain your actions to only those of a rough nature. Only Rough people can really survive here, especially with the Prease Condition affecting everyone.

P.s. This image came from www.engrish.com Check it out, it is awesome!
Labels: Translations & Interpretations