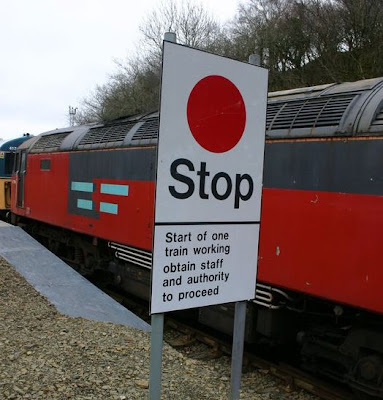 Ah yes. Confusing indeed. This sign can really only be understood in context. Despite what they would have you think, train engineers are still engineers, and thus, nerdy at heart. And like any nerd, they can't resist role playing games. They have set up elaborate webs of games ranging all over the country, with clues disguised as hard to decipher train instructions. The interpretation is this:

At the stroke of 1:00 the train will start moving. You have until then to defeat the wizard, steal his staff, and cast a spell on the Train Conductor to obtain a ticket for passage.
Labels: Translations & Interpretations