I Hope it's Cake

And now, to help women understand men. Hang on ladies, I am about to drop some wisdom on you. My cousin sent me this link: http://wondermark.com/030/

What a comic strip! How indicative of the Human condition! How well it reflects the deep and unfathomable differences between women and men! Men give women what they ask for. Women plot revenge. Men have already moved on to thinking about food.

As a wife and mother you do a lot to contribute to the house and family. You cook dinner, you clean the house and wash the clothes, plus you work part time, volunteer at church, and spend countless hours online. In addition, you have a few other projects you work on; outlets for your creativity. You take pride in what you do and the stuff you create and, like anyone, you think a little recognition would be nice. Sometimes all you want is for your husband to realize and appreciate all you do. You always think he should just be overwhelmed with the awesomeness of having a live in servant. It’s gotta be pretty amazing for him that now that he is married he never has to worry about his laundry ever again. He should constantly say things like “Wow! It is so wonderful to have a wife! Thanks for taking care of me!!!”

But he doesn’t. Does any man ever say that? And we know, he’s not some careless, slobbering ingrate, but that level of gratitude and recognition just doesn’t occur to him.

So then you think, perhaps he will really love and appreciate my arts and crafts! Perhaps he’ll say “Golly! That Teddy Bear you made out of garbage bags at Homemaking is really special! It looks so great up on the mantle like that! You sure are talented!”

But he is not going to say that. You probably really don’t want him to anyway, just think about it.

Anyway, blah, blah, blah. I’m here to tell you I found out how to get my husband’s attention. Like most people I have creative phases I go through: scrapbooking, gardening, macramé, Line Rider. But I have finally hit on the winner. Cake. Somehow I got the idea in my head that I wanted to try to decorate a cake. A good one. Could I do it better then the loons on Cake Wrecks? I became a little obsessed with the idea and went cake crazy. And they have actually turned out ok. But the thing about it all that is the funnest for me is how involved Richard got. I could sew myself a whole new wardrobe and he might say “Oh, good job.” But I make and decorate one cake, and he is literally beaming with pride. He wanted to show everyone. I’ve never seen him so proud. It still makes me giggle.

For demonstration purposes, I would like to show you one of the first fancy cakes I made (maybe "tried to make" would be a little more accurate.) 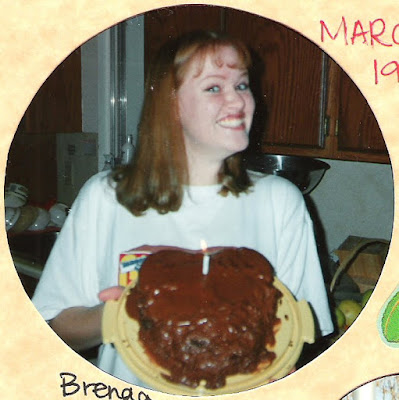 This was for my high school boyfriend. I guess we had some structural issues, but we frosted it anyway! And delivered it, though I don't remember that part? Thanks for modeling Brenda! (I was going to say something here about the crumbling cake representing our crumbling relationship, but I gave up. Oh wait, look at that, I think I've done it.)

Anyway, my cakes have improved quite a bit, but even if I had made this very cake and presented it to Richard, he still would have been pretty tickled. So why am I telling you this? I know men aren’t all the same, but there is an 83% chance that if you pour your creativity into food, especially food that he gets to eat, he is not going to be able to ignore it. He won’t want to ignore it. He may even think you are the most talented thing he has ever seen. And that is a pretty nice place to be.
Labels: Cakes Thoughts