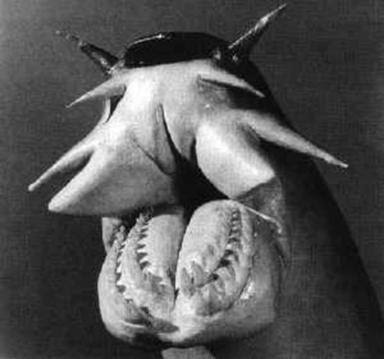 My mom sent me this beautiful picture. I think I actually screamed when I saw it (maybe it was more of a screamlet than a scream). I don't know where she came across such a thing. And I'm not sure why she sent it, except that it is called a Hagfish. Maybe she is saying that I am a Hagfish? Which, when I first read some of the descriptions of it, I thought it was awful nice of her.

UCMP Berkely had this to say: "Hagfish are long, slender and pinkish, and are best known for the large quantities of sticky slime which they produce." Well, almost nice, I guess. But really Mom, I stopped spitting slime in the 9th grade! I read on and decided that I was inferring more than she was implying when I got to this paragraph:

"Young are hermaphroditic at first, bearing both sets of sex organs; later in life, they will be either male or female, but may change sex from season to season." Wow, talk about an identity crisis. Can you imagine being a teenager with that sexually uncertain future hanging over your head? Man! Fish are wacky! I told my husband about the Hagfish, and he surmised, very wisely I think, that "Sea Creatures are all messed up". Quite so. Maybe I will organize some sort of Teenage Marine Life mentoring program. Think of all the poor, confused Aquatic Adolescents we could help. Anyone have ideas for the name? Person who comes up with the best name gets a plaque on the building!